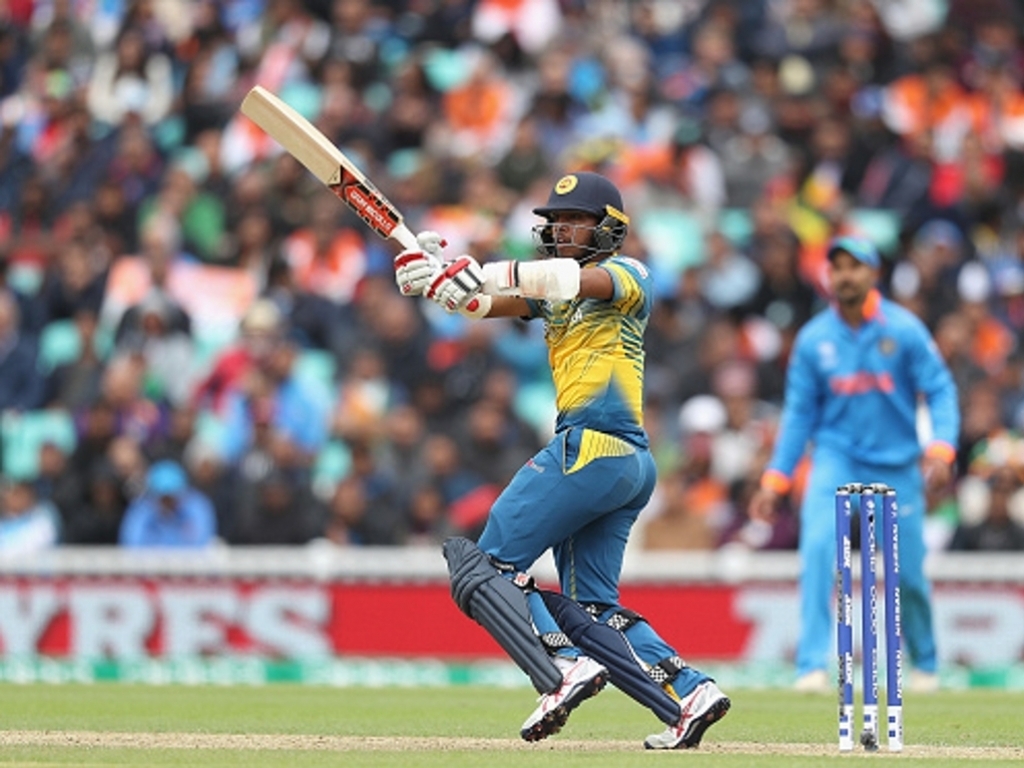 Sri Lanka pulled off a stunning upset at the Oval when they chased a massive score of 322 and pulled off a wonderful seven-wicket win against India – the highest chase in Champions Trophy history.

The tournament now funnels to a most dramatic business end as both of the games over the weekend will now be virtual quarter-finals.

Captain Angelo Mathews was back from injury and he elected to field first at the toss.

India batted calmly but smoothly and Sharma (78) and Dhawan (125) amassed a cool 138 runs for the first wicket, in under 25 overs.

Dhawan looked particularly stylish as he strode to an impressive ton that boasted a wide range of attractive stroke play.

They were going at a fairly handsome rate but in hindsight, perhaps they were a little on the cautious side.

Malinga (2-70) got the breakthrough and then Sri Lanka’s nemesis, India captain Virat Kohli,  was caught behind off Pradeep for a duck.

Yuvraj (7) failed to get going but India survived the mini-collapse relatively well as Dhoni (63) took the reins and kept things together whilst scoring at better than a run a ball.

Sri Lanka’s attack lacked sting and didn’t ever look like they might bowl out the team in light blue and yellow (their ‘away’ kit) but, once again, the match was played on a lovely flat batting surface and the ball refused to misbehave.

These batsmen-friendly pitches are tailor-made for run fests and the ICC got exactly that today.

Sri Lanka lost Dickwella (7) early but Danishka Gunathilaka, who was added to the squad on the eve of the match, batted superbly with Kusal Mendis to turn the match on its head.

The predominantly Indian crowd that had been so vocal were hushed as the pair put together 159 runs in 24 overs. Gunathilaka, in particular, played some extraordinarily beautiful shots.

He had also bowled well, conceding just 41 runs from eight overs of tidy off breaks.

Something had to give and the all-rounder was run out in tragic circumstances as the pair decided to go for a second run when really just the one would have done. A second run out, of man-of-the-match Mendis, threatened to put India back in the driver’s seat.

The score was 196 for three in the 33rd over and Mathews (52 not out) joined Perera (47 retired hurt) at the crease for the partnership that would decide the match.

The batsmen dug in and then accelerated, both going along at impressive strike rates, as they added 74 runs to the tally before Perera retired hurt with a hamstring injury. There were only 50 runs to get and the dark blues were well up on the rate – a delicious victory loomed.

Gunaratne came in and smacked a quick 34 runs to take it home with his skipper, with eight balls to spare. A famous win indeed. India’s bowlers had only taken a single wicket and none returned dishy figures.

The game opens the tournament right up as the weekend’s fixtures, England against Australia on Saturday and South Africa against India on Sunday, are both knockout games. Australia could get knocked out of the tournament with three rained out games to their name and the forecast is a little dreary!

Sri Lanka were over 100/1 to lift the trophy with the bookies before this match. They certainly will be a lot shorter than that now and face fellow giant killers Pakistan with the winner incredibly qualifying for the semi-finals.