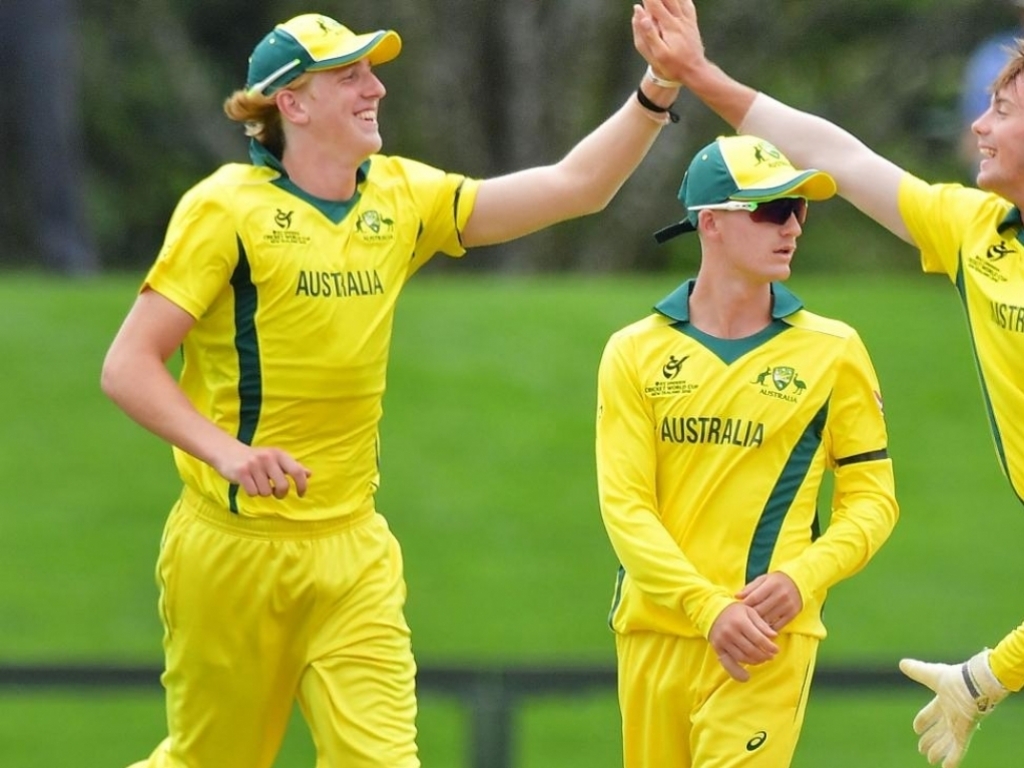 A thoroughly professional performance with both bat and ball saw Australia ease into the final of the U19 World Cup at the expense of Afghanistan at the Hagley Oval on Monday.

Australia lost the toss, but overcame the apparent disadvantage of being inserted with ease, bowling out Afghanistan for 181.

Ikram Ali Khil’s brilliant 119-ball 80 apart, Afghanistan will be disappointed with, with Rahmanullah Gurbaz’s 20 being the next high score.

Under overcast skies and windy conditions, Jonathan Merlo, the Australia quick, ran riot, returning a brilliant 4/24 that took the stuffing out of Afghanistan.

Too many of their batsmen were guilty of chasing deliveries wide on the on-side, with as many as three of them dismissed caught down leg.

Afghanistan’s plan was good enough though. They hoped to do a repeat of their performance against New Zealand – bat solidly, consolidate in the middle overs, launch at the death. This time around they started well enough, but weren’t able to hold their own in the middle overs.

They lost Ibrahim Zadran early, the batsman miscuing an attempt at a hook. Gurbaz hung around though, adding 37 with Ali Khil before becoming the first batsman to be caught down leg off Merlo.

Ali Khil sealed up one end, and found the fence as much as he could, but the wickets flowed at the other.

Bahir Shah (4), who scored an unbeaten half-century in the last match, was the second to be caught down leg, off Merlo again. Darwish Rasooli (2), of whom much was expected this tournament, again failed to deliver, trapped in front after missing a flick off Merlo.

Nisar Wahdat (11) didn’t last long either, Merlo cleaning him up.

All the while, Ali Khil kept the scoreboard ticking to take Afghanistan past the 100-mark first, and then add as much as possible.

By the time he was dismissed, returning a catch to Lloyd Pope in the 41st over, he had contributed to almost 55% of Afghanistan’s total at the time – 146/7.

Mujeeb Zadran swung his bat around to score an unbeaten 12, boosting Afghanistan to 181 and giving them something to bowl at.

It was Mujeeb, fresh from an unprecedented payday at the IPL auction, who struck the first blow, coaxing Max Bryant into driving straight to mid off.

But by then the key incident had already occurred, as Jack Edwards was dropped at point when Australia had just 13 on the board. It was struck firmly enough, but it went straight to Darwish Rasooli.

The captain’s displeasure – he was also the bowler – showed he thought it should have been taken.

Jack Edwards extended his score to 72, striking eight fours and two sixes, both of which came in one over, the first just clearing the rope, and the second going in exactly the same direction but much further, sailing over the hoardings and into the press tent.

Contributions from the rest of the batting order was all that was needed, and though there was a minor tremor when Australia lost two wickets for the addition of four runs when still more than 50 from their target, a cool-headed partnership between Nathan McSweeney and Param Uppal saw them home.

Australia had spoken before the game about their fallibility with the bat, and about how they hadn’t yet put their perfect game together.

But this, with bat and ball, was about as close as they could have hoped to get, and it deservedly sees them into the final where they will meet India or Pakistan in Tauranga.