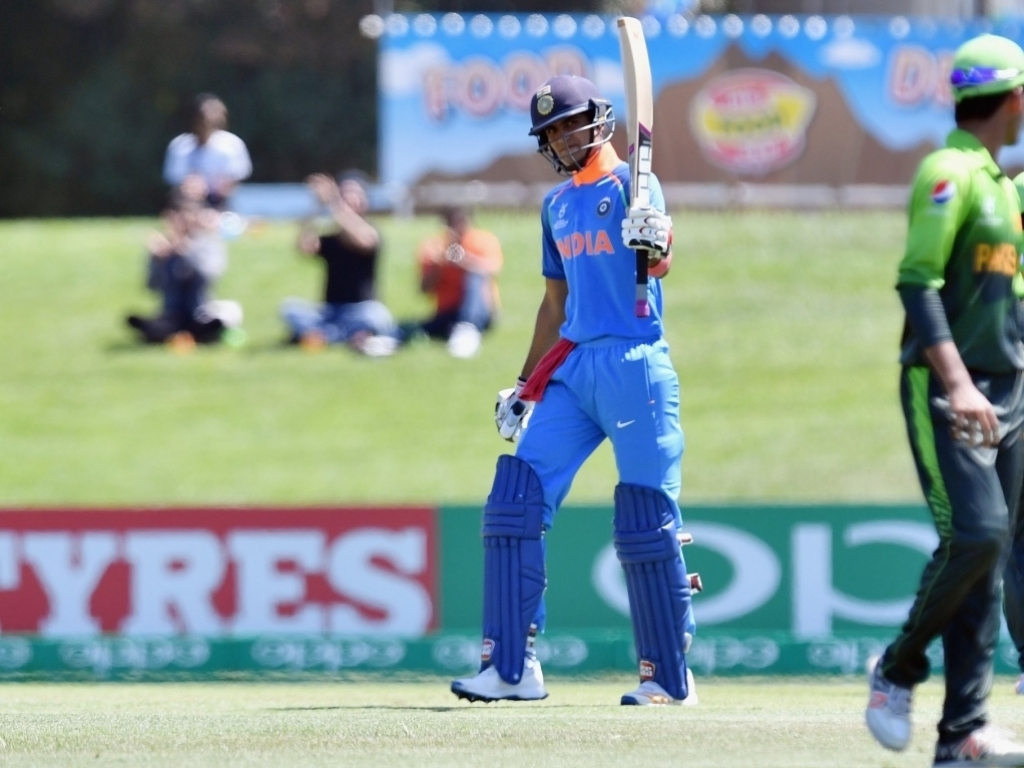 India saw off Pakistan with ruthless efficiency to seal a massive 203-run victory in the second semi-final of the U19 World Cup.

Shubman Gill set things up with an unbeaten 102 that helped India post a mammoth 272/9 after opting to bat, before Ishan Porel’s 4/17 dismantled Pakistan – they were bundled out for 69, their lowest total in U19 CWC history.

Pakistan had a few moments in the first innings, especially with Muhammad Musa (4/67) and Arshad Iqbal (3/51) running through India’s middle order to cause the batsmen a few jitters.

However, Gill’s mesmeric century – he posted his sixth consecutive fifty-plus total in U19 ODIs – was ultimately telling.

The Pakistan batsmen needed something special to seal victory thereafter – their best-ever chase in U19 World Cups, in fact – but appeared daunted by the task that awaited them.

Eventually, India sealed a date with Australia in the final in Tauranga on Saturday.

India opted to bat, giving a sizable chunk of fans at the Hagley Oval an early look at the possible future of this India-Pakistan rivalry – Prithvi Shaw facing up to Shaheen Afridi.

Prithvi was typically superior with his technique, barely giving the bowlers a sniff, but Manjot Kalra used up many of his lives at the other end – he was dropped twice by Zaid Alam, off Shaheen on 24 and on 29 off Hassan Khan.

He carried on to score a 59-ball 47, but the first to fall was Prithvi, run out unfortunately after attempting a quick single. Three overs later, Manjot’s dismissal by Musa reduced India to 94/2.

Gill came in and took charge after that, virtually ensuring Pakistan were better off just focusing on the other end.

It yielded some success, with Arshad Iqbal running through the middle order, dismissing all of Harvik Desai (20), Riyan Parag (2) and Abhishek Sharma (5).

Shubman did most of the scoring though, putting on 54 with Desai to revive the innings after the openers’ dismissal, and a crucial 67 with Anukul Roy (33 off 45), who himself plundered the Pakistan bowlers in the final stretch.

Roy was caught behind down the leg side off Musa, but Gill carried on to complete his century in dramatic circumstances. He was on 99 when he got on strike with one ball remaining. He got to three figures after he was dropped by Hassan in the deep.

It further turned out that that was a no-ball, although they could yield just one run from the free-hit that followed.

By the end of the innings, the frustration for Pakistan was evident, their players barely concealing their feelings when teammates didn’t capitalise on an opening or were too lax in the field.

There were plenty of fielding lapses, a couple of no-balls and all in all, it wasn’t a session these players will particularly want to remember. It would only get worse.

The Indian pacemen proved incredibly hard to handle, zipping and shaping the ball around. Pakistan’s batsmen’s temperament has been suspect all tournament, and today, it was laid bare for all to see.

With Shivam Mavi building pressure from one end with three consecutive maidens, Ishan Porel capitalised at the other – he had all of Zaid Alam (7), Imran Shah (2) and Ali Zaryab (1) dismissed in consecutive overs. Pakistan were 20/3.

It was then the turn of the spinners – Mohammad Taha holed out as well to become Shiva Singh’s first of two victims, and when Rohail Nazir then charged Riyan Parag and holed out as well, you could sense his frustration.

He had until then batted with restraint, but abandoned the plan when he realised it was a lost cause.

A similar fate awaited Hassan and Afridi, and it was telling that Pakistan’s only positive in the innings was a 20-run ninth-wicket partnership between Saad Khan and Musa. Both found the fence, with Musa even lifting Shiva over long-off for a six.

Unfortunately, it wasn’t enough to avoid that unwanted record – their lowest total in U19 World Cup history.