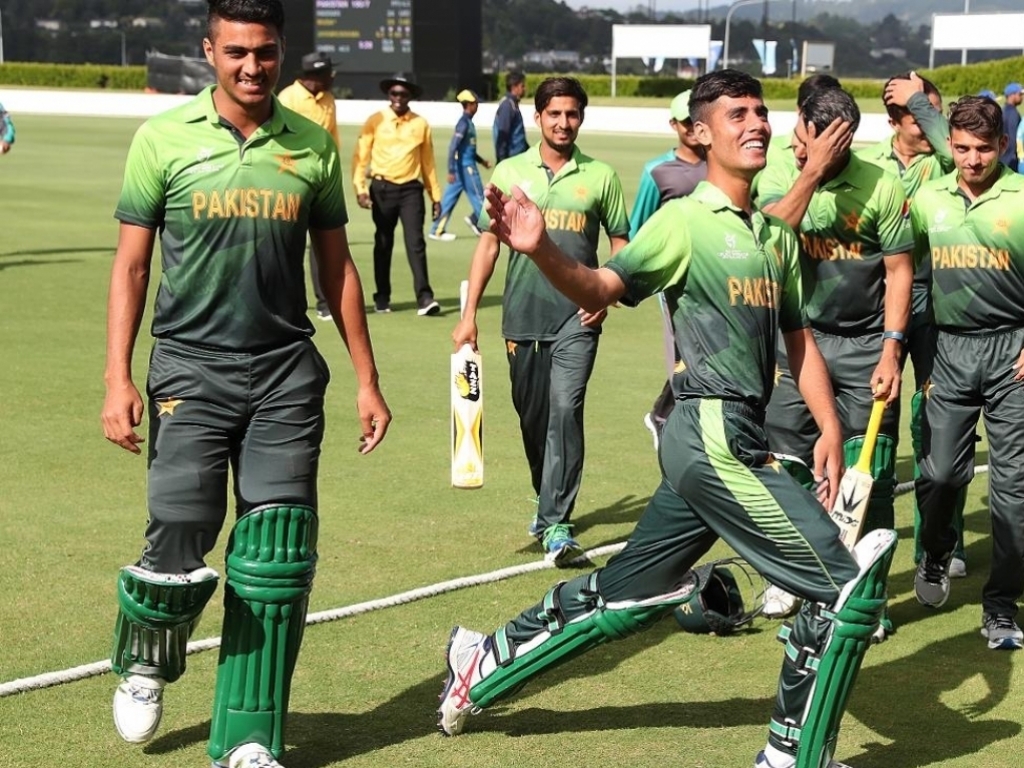 It was another thriller at the 2018 ICC Under 19 World Cup, and yet again, Pakistan were involved.

Ali Zaryab once again had to perform a rescue act as his teammates floundered in a chase of 190 in the Super League quarter-final against South Africa at the Hagley Oval in Christchurch on Wednesday (24 January).

His unbeaten 111-ball 74 propelled Pakistan after their bowlers had restricted South Africa to 189/9.

Given Pakistan’s top-order wobbles – a similar chase against Sri Lanka in their must-win final game was nervy as well – it was never going to be a straightforward chase.

Especially with Zaid Alam and Rohail Nazir, their openers, looking to attack the bowlers rather than build a solid foundation.

Zaid fell for a 9-ball 15, holing out off Gerald Coetzee, Ammad Alam followed suit and the tone of the innings was set.

At 38/2, Nazir knuckled down along with Zaryab, and the two put on a steady 25-run stand, during the course of which Pakistan seemed to have revived their innings.

However, Nazir chased a Rolfes delivery wide outside off, nicking one to the keeper, and it seemed a partnership just wasn’t on the cards for Pakistan.

When Jason Niemand then had both captain Hassan Khan (14) and Mohammad Taha dismissed within four overs, Pakistan were 111/5 and South Africa seemed to have edged ahead.

However, Zaryab finally found some able support in Saad Khan. The two cut out all the loose, risky shots, opting to stonewall and inch their way ahead. It was the need of the hour. And it is what eventually won Pakistan the match.

Their 65-run stand for the sixth wicket took Pakistan to within 14 runs of the target, with Saad even playing a few exquisite drives later in the stand.

However, in a burst of exuberance, he charged Kgaudisa Molefe and holed out. Muhammad Musa was dismissed for nought, and South African hopes once again rose.

But Zaryab guided Shaheen Shah Afridi, and the two managed to sneak past the target with 13 balls to spare.

In the morning, there was some debate over how the pitch would play.

Pakistan chose to bowl, with captain Hassan Khan hoping for his seamers to make early inroads, while South African captain Raynard van Tonder said he would have batted on a good surface.

It was Hassan who was proven right, and spectacularly so at first, as his three fast bowlers reduced Pakistan to 43/4, finding movement in the air and extracting bounce from the pitch.

It was the bounce that got opener Matthew Breetzke, who added another low score despite briefly looking good.

He flashed in the corridor and gave only a nick to the keeper. Second to fall was Jiveshan Pillay to probably the ball of the day, the promising Shaheen getting one to swing in a bit and then seam in further, finding the inside edge on its path to the stumps.

Then it was the turn of Musa, who found the edge of the bats of van Tonder and Hermann Rolfes, South Africa’s two century makers this tournament.

Van Tonder’s was a leading edge which looped to mid-on, while Rolfes’ was more standard, driving at a ball that was only full-ish which straightened.

Wandile Makwetu and Jean du Plessis initially struggled against the fast bowling as well, even as Makwetu struck the only six of the innings, a top edge over fine leg.

But with the introduction of spin South Africa found stability, Makwetu sweeping well, and du Plessis content to rotate the strike.

They were parted after adding 59 by Hassan, du Plessis aiming a cut at a ball too full to do so and top edging to third man. But Makwetu and Niemand continued where they left off, and South Africa could dream once again of 250.

It was Musa who struck the key blow, and it was once again pace and bounce that did the trick, Makwetu being rushed into a pull and looping one to deep square leg.

Though that put 250 out of range, South Africa at least got close to 200 thanks to Niemand and Jade de Klerk’s partnership of 36, the pair tucking around the change bowlers to good effect.

It was Shaheen who removed de Klerk, although from with a direct hit from long on rather than with a lifter from the crease, and from then on South Africa struggled, edging their way to their eventual total. It wasn’t quite sufficient.