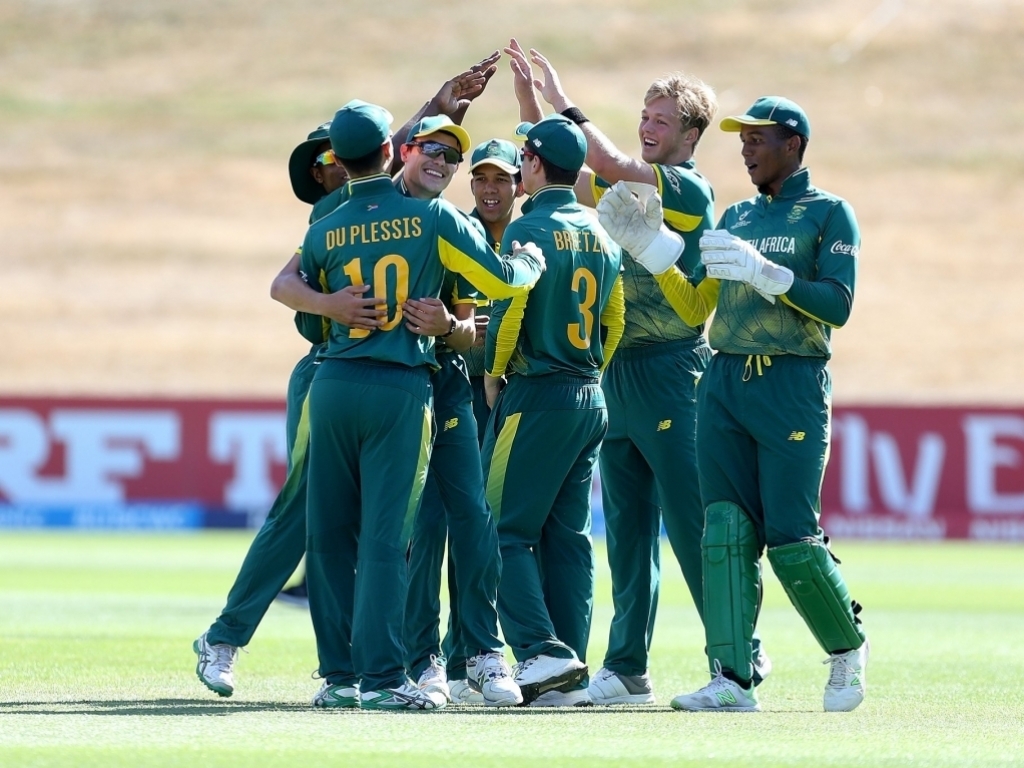 South Africa cruised to victory against Bangladesh, by eight wickets, in Queenstown to claim fifth spot at the ICC U19 World Cup in New Zealand.

South Africa’s pace attack started the job with fury and their batsmen finished it with aplomb.

Fraser Jones took 5/33 and was ably supported by Akhona Mnyaka’s 3/27 as the young Proteas did a demolition job on the Bangladesh top order.

The Tigers were beaten all ends up by the brutal pace attack of the South Africans in the first hour of play with Jones and Mnyaka taking five between them in a devastating opening spell.

Mohammad Naim Sheikh was the first man to go, edging to Jean du Plessis in slip. Du Plessis’s safe hands would be the beneficiary of another edge in the next over off the bowling of Jones.

South Africa’s sharp work in the field continued with Jade de Klerk seizing a pair of chances at backward point – first, one that arrived at an awkward height to dismiss Aminul Islam and then a superb diving effort to his right which ended the innings of Tawhid Hridoy.

The latter is surely a candidate for catch of the 2018 ICC U19 CWC.

Bangladesh could offer little resistance in the middle order and when Naim was caught behind for just 2, the Tigers slumped to 33/5 in just eight overs.

Afif Hossain and Shakil Hossain then pieced together a spirited 96-run partnership, occupying the crease for over an hour and stymieing the early South African dominance.

Afif played the role of the aggressor, blasting seven boundaries and a pair of sixes before his timely knock of 63 came to an end when he was caught by Hermann Rolfes from Mnyaka’s bowling.

Shakil batted on before his demise on 61, caught by South African skipper Raynard van Tonder.

A stubborn 13 by Qazi Onik and an unbeaten 18 by Tipu Sultan ensured Bangladesh would post a total that gave them a fighting chance of victory, but their bowlers – with no room for error – couldn’t contain the South African batsmen.

After losing Jiveshen Pillay early for 12 and Matthew Breetzke shortly thereafter for 36, van Tonder and Rolfes dug in to finish the job without further loss.

The captain played a stylish array of shots, which like his Bangladeshi counterpart, included seven boundaries and a pair of maximums.

He would finish on an unbeaten 82 while Rolfes walked off with 44 not out next to his name as South Africa concluded their tournament on a winning note, albeit in fifth place overall.