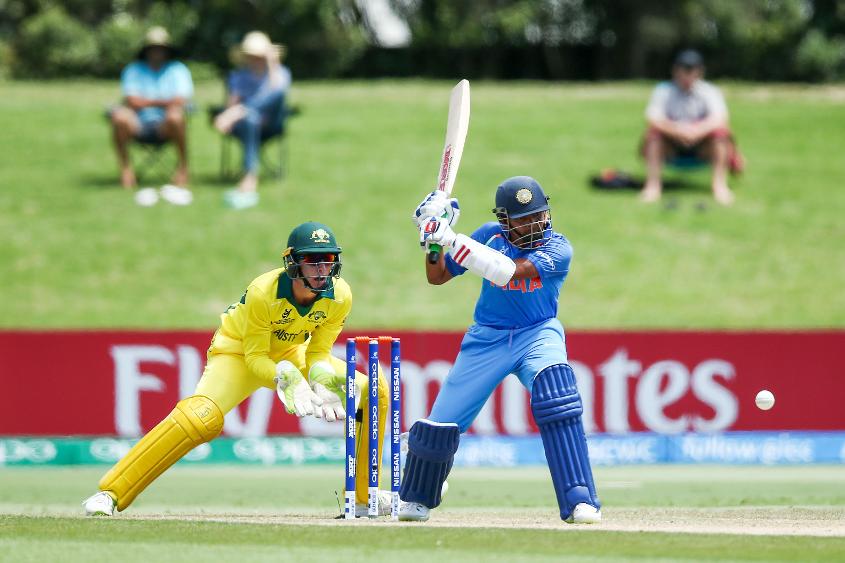 A magnificent 180 runs opening wicket stand between captain Prithvi Shaw and Manjot Kalra was the cornerstone of India’s thumping 100 runs victory over Australia in a battle of former champions on the second day of the U19 Cricket Cup 2018 at the Bay Oval, Tauranga.

Electing to bat first in a Group B match, India posted a huge 328 for seven after Shaw (94) and Kalra (86) were associated in a record 180-run opening partnership in just under 30 overs.

Shaw struck eight fours and two sixes off 100 balls and Kalra slammed 12 fours and one six as the two bettered a 14-year-old record for India.

The previous highest partnership for any wicket by an India pair was in the U19 World Cup 2004 when Shikhar Dhawan and Robin Uthappa put on 175 runs against Scotland.

For Australia, Jack Edwards was the pick of the bowlers and ended up with impressive figures of 9-0-65-4.

In their turn at the wicket, Australia lost wickets at regular intervals to be dismissed for 228. Kamlesh Nagarkoti picked up three for 29, while Mavi finished with three for 45.

Jack Edwards was his side’s most impressive player. He followed up his four for 65 with a 90-ball 73 that also included six fours and a six.

Sri Lanka coasted to a convincing seven-wicket win over Ireland in a Group D match with opener Dhananjaya Lakshan slamming a fine unbeaten 101 from 120 deliveries with the help of eight fours and one six.

Sri Lanka, chasing 208 for victory, had lost two early wickets after a double-strike from Aaron Cowley and were 51 for three at one stage, before Lakshan’s unbroken 157-run partnership with captain Kamindu Mendis (74 not out) took the team through.

Earlier in the day, Mendis had also grabbed three for 35 with his spin bowling to restrict Ireland to 206 for eight in the 48-over match after openers Jamie Grassi (75) and Mark Donegan (36) had provided their side a 73-run start.

South Africa scored a massive 341 for seven after electing to bat in the Group A match. This was South Africa’s second highest total in the U19 World Cup after their 359 for six against Namibia in 2012.

Captain Raynard van Tonder slammed a stroke-filled 143 off 121 balls, smashing 14 fours and five sixes, and was associated in a 125-run second-wicket stand with left-handed opener Jiveshan Pillay (62 off 67 balls with seven fours and s six) as the team virtually batted the opposition out of the contest.

Kenya were never in the chase and eventually finished at 172 for seven in 50 overs after being reduced to 50 for four in the 19th over and then 98 for six in the 34th over.

Jasraj Kundi (41) and Ankit Hirani (35 not out) were the main run-getters for Kenya as the two put on 57 runs for the seventh wicket. For South Africa, Akhona Mnyaka finished with figures of 4-1-9-2 and Kenan Smith returned figures of 10-1-36-2.