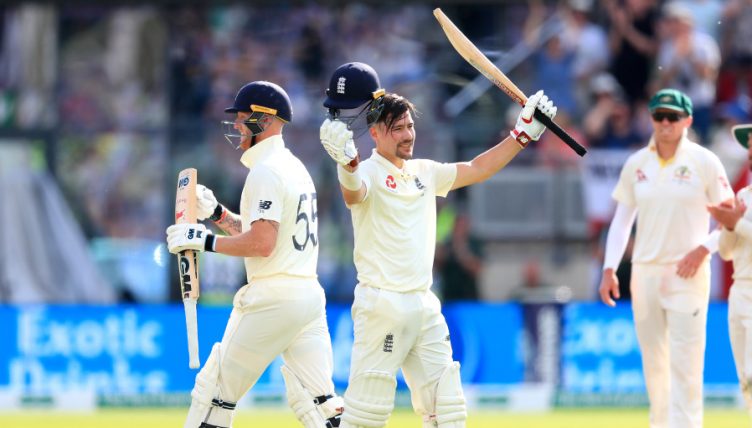 If the first day felt like a bit of a culture shock following the thrill-a-minute shenanigans of the World Cup, today reintroduced the world to the true nature of Ashes Test cricket. This was the longer format at its most rugged, tenacious and tantalising best.

Here we take a look at five of the key talking points in a day that started out even, but finished with a firm English grasp on the Ashes controls.

Stop us when you’ve seen this before.

It’s 2019’s version of King Kong versus Godzilla, Hulk Hogan versus Andre the Giant, the irresistible force meeting the immovable object – the cricket ball versus the cricket bail.

It can be described as nicking the stumps, clipping them or even just barely scraping them but the fact remains that the ball hit the stumps and once again those bails were not for moving.

May we direct your attention to the picture located bottom left…

Pattinson thought he had Joe Root caught behind for 9 and the umpire agreed – turns out the ball actually clipped the stumps!

A remarkable turnaround for a man who looked like a deer in the headlights just one week ago.

His maiden Test century of 125* was everything England could’ve hoped for from a Test opener, and everything they’ve been so sorely lacking for the majority of the last 12 months. Sure, it wasn’t graceful, he played and missed on 34 separate occasions and rode his luck as far as it would go, but unless you’re named Steve Smith, you need a touch of fortune at times.

This may well be Burns’ peak in the series – as good as it gets, but it’s a fantastic start nonetheless, and it has safeguarded his place at the top of the order for the rest of the summer at least.

3) The standard of umpiring

It’s a difficult and thankless task, we get it, but this is the pinnacle of Test cricket and the level of umpiring so far has quite simply been sub-par.

Some decisions were forgivable – Root’s overturned caught behind a prime example. At the speeds the fast bowlers operate at, the men in charge are going off what they hear almost as much as what they see. The difference in sound between the ball clipping the thick wood of a bat or a stump is audibly and discernibly different to that of when it clips a pad. So when Aleem Dar heard the noise associated with ball on wood at 86.4mph, he understandably gave the batsman out.

The issue isn’t so much the nature of the errors – we’re all human, it’s the sheer quantity.

By 2pm on day two, the umpiring error count had reached double figures.

We have #10 — Here's another decision that's been overturned. Root had a big inside edge and Aleem Dar's lbw decision has been reversed again!

Who's winning this battle between the umpires?

A can of worms it would most certainly open, but the game deserves a better standard of umpiring than what it is currently getting.

A lot has been said and written about Root’s promotion up the order to number three. The statistics don’t lie – he averages around 48 at his preferred fourth spot as opposed to 40 at three, but what matters the most is the statistics going forward.

For today, at least, it worked.

Root came to the crease with England 22-1. Had Joe Denly been the man to partner Burns in the middle at that time, you’d be hard pressed to find even the most optimistic of England fans thinking it wouldn’t be two down within the next couple of overs. The nerves and whispers of ‘here we go again’ would inevitably emerge.

Instead, Root scratched and battled his way to a hundred-plus partnership with Rory Burns, relieving the pressure on both his junior partner Burns at the crease, and Denly to follow. Denly added just 18 runs, but the bigger picture is what’s most important here.

Root may have characteristically failed to convert his fifty into a hundred once more, but the platform he and Burns laid has put England into the driving seat upon the conclusion of day two.

Big calls take big balls and can reap big rewards, but the biggest fear of all is the consequences that can follow.

Leaving out two top performers the likes of Mitchell Starc and Josh Hazlewood was always going to be a decision that would be judged based on the outcome of the match.

The bowlers that did play didn’t bowl badly at all, you could even go so far as to say they bowled well in a flurry of controlled yet luckless spells – but not as well as England bowled, and perhaps more importantly, not as well as Australia could’ve bowled with the 13th and 15th ranked Test bowlers steaming in.

Boy, if only Australia could call on the 13th and 15th best bowlers in the world right now. #Ashes

Captain Paine’s reasoning for overlooking the duo pretty much boiled down to ‘horses for courses’.

The course of the first Test could have irrevocably changed direction today with two of Australia’s top horses sat grazing in the stables.

Five alternative observations from a pulsating 2019 Ashes – Day One