Day four will go down in the history books as one of those classic days of Ashes Test cricket that Sky Sports will show a thousand replays of in gloomy rain delays of the 2020’s and decades beyond.

The primary reason? An incredible, enthralling and ferocious battle between two cricketers at the peak of their powers – Steve Smith and Jofra Archer.

You’d be forgiven for thinking that the Ashes series is a competition between England and Australia. Ordinarily you’d be right, but after Edgbaston it felt more like one man versus the world in the form of Steve Smith v England.

The Steve Smith chronicles, part one

Before the Archer/Smith hype machine revved up to full power, the day’s play took on a rather familiar feel with Smith frustrating England at every turn.

We all know the statistics of how reliant Australia are on the seemingly endless supply of runs from Smith’s bat. But just in case you need a reminder, check out our chart below. 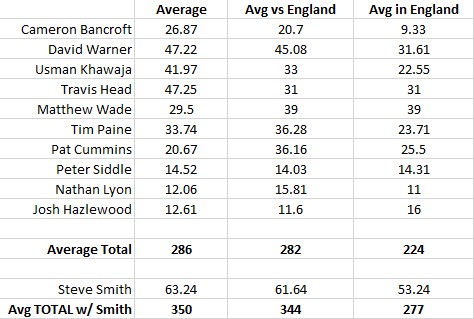 The stats from the first Test made for grim reading if you’re of the opinion that England can’t win without getting Smith out.

Smith contributed over 50% of the total Aussie runs in their first innings, and accounted for 37.1% of their entire runs across the match (39% with extras removed).

So that begs the question, if England can’t get him out, why should they try?

This is an Ashes series on home soil after all, where monster scores of 400+ are rarely required to win a five-day Test match.

Five of Australia’s top six (with Smith removed) all average significantly below their overall Test average when playing in English conditions, with Usman Khawaja the biggest offender at almost 20 runs per innings worse off.

England don’t NEED to dismiss Smith to take 10 wickets, and the other 10 batsmen have shown little to suggest they can contribute significant runs to push Australia to totals of 300 and beyond in the typical English overcast conditions we have seen thus far.

Even Matthew Wade’s hundred in Birmingham has a footnote attached after England were a bowler light in the form of Jimmy Anderson’s calf, and Jofra Archer had yet to debut.

So what am I suggesting? Simple – Don’t bowl anything that Smith can score from.

It sounds ludicrous, but it isn’t too far from the tactic England previously employed via Stuart Broad in the shorter formats by bowling yorkers a country mile outside of off-stump. Dot balls to Smith and take your chances with the other blokes who are clearly having a difficult time of it with the Dukes ball seaming and swinging.

And besides, Smith is generally there or thereabouts at the end of the innings anyway, so why not put the Smith equation to one side and focus solely on the 10 nervy-looking chaps at the other end.

It’d be tantamount to giving up in the battle versus Smith, and the strategy would surely be hammered in the press, but who’d complain if Australia were bowled out for 224 every innings with Steve Smith stranded at the non-striker’s end on an unbeaten zero from 100 balls?

Surely. even England could win a Test or two if the opposition only scored 224 each innings, right?!

That video game-esque theory had intended to be the main (semi-serious) narrative of this piece… until Jofra Archer locked horns with Steve Smith like a couple of rutting stags out in the greenery of Lord’s.

Few things in cricket stir the senses like a pulsating battle between fast bowler and steely-eyed batsman. Everyone remembers Donald v Atherton at Trent Bridge in 1998, and 2019’s version was every bit as engaging, if not more, with the higher stakes of an Ashes series providing the backdrop.

That's the fastest over by an English Test bowler where data is available. #Ashes

Archer’s bowling speed is ferocious but not unique. The difference with the 24-year-old compared with past English speedsters the likes of Andrew Flintoff, Steve Harmison and Steven Finn is that he can maintain his consistency of speed, line and length over after over.

Smith initially looked untroubled until a glitch in his otherwise perfect matrix appeared in the form of an Archer heat-seeker that sought out the batsman’s forearm.

Follow over-by-over updates from the second #EngvAus Test at Lord's and watch live on Sky Sports The Ashes https://t.co/PU5W6F4l2l pic.twitter.com/4Wo5SLzHp5

A golf ball-sized lump quickly emerged but thankfully the x-rays came back negative and Smith will be fit to take his place back at number four tomorrow.

Not long after, however, this happened.

It was a frightening moment as the ball struck Smith on his neck just below the protection of his helmet. Smith chooses not to wear the additional neck protection attachment on the helmet that would have cushioned the blow to some degree. For peace of mind at least, you’d expect that might change before Headingley.

Following a brief spell off the pitch adhering to the concussion protocol, Smith returned to the crease, but looked half the batsman he was prior to the blow.

Just 12 more runs were added before he uncharacteristically left a Chris Woakes inswinger that cannoned off his pads and concluded his quest for a fourth successive century versus England just eight runs shy.

Whether Smith will suffer any psychological ill-effects from the blow remains to be seen – a Stuart Broad-esque batting disintegration after his broken nose v India in 2014 is highly unlikely – but the fact remains that Smith’s invincible aura has been shattered and Archer will now believe that he can be the man to remove the Smith-shaped curse from upon England’s shoulders.

The headline on the marquee reads ‘England v Australia’, but it may as well read ‘Smith v Archer’ from here on out.

Perhaps England, or Archer to be more precise, should try to get him out after all.