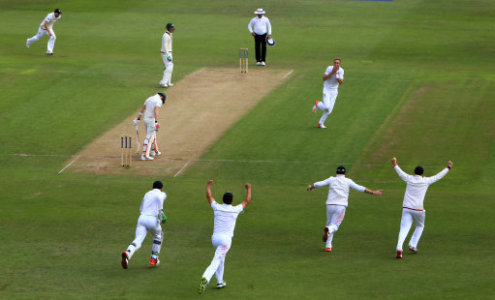 My favourite moments as a sports fan have always involved watching Test cricket – particularly Ashes cricket. It’s not the level of skill on display necessarily or the inevitable ebbs and flows of the day, but the way that I feel when I’m there. The feeling that there is no place I’d rather be at that moment and the feeling that the people around me feel the exact same way.

To the tune of ‘Sing Hosannah’ – “Ashley Giles, Ashley Giles, Ashley Giles is the King of Spain”. The chant was ringing out as I sat in the Raglan Stand for my first taste of Ashes action at Edgbaston. ‘Old wheelie bin’ Giles produced arguably the most important moment of the entire 2005 series and there were plenty of contenders.

The England spinner was known as ‘The King of Spain’ after mugs adorned with Giles in full bowling action were misprinted – they were meant to read ‘The King of Spin’ – a questionable slogan anyway given his reputation for ‘arm-balls’.

Ricky “Punter” Ponting and Justin Langer were comfortably dealing with England’s much fabled seam attack – putting on close to a hundred for the second wicket. They looked like they could bat all day. Having lost comfortably in the opening Test match at Lord’s, England needed a hero, someone to turn the game and the series on its head. Enter the much maligned Ashley Giles. Brought on to frustrate and control, where the runs were free-flowing before, they dried up when Giles came into the attack.

Half an hour later and Giles was gesturing to the media, who had consistently questioned his inclusion in the side, as Australian captain Ponting trudged off the pitch having been caught off his bowling. Tired of padding the ball away and keen to make the most of England’s least formidable bowler he spooned a catch to captain Michael Vaughan at short fine-leg – jubilation and retribution for Giles.

“Jones! Bowden! Kasprowicz the man to go.” Richie Benaud’s magnificent commentary as England won the Test match by two runs as Geraint Jones took a catch down the leg-side and Billy Bowden raised that crooked finger to send the team, the crowd and the country into raptures. The Test match is best remembered for that catch and that picture of Flintoff consoling Brett Lee but I’ll remember it for the King of Spain – who laid the platform for the greatest Test series victory of all time.

Play was delayed at the start of day two. Not due to rain – that’s annoying but understandable. ‘Bad light’ delayed the start of play. The phrase ‘bad light’ is almost as annoying as the effect it has in delaying or postponing a game of cricket. Other abiotic factors aren’t described in terms of morality. You can’t have a bad temperature or a good humidity. The light hasn’t done anything wrong it’s just too dark to play cricket – and it wouldn’t be if they had turned the f***ing floodlights on.

But I was happy enough waiting for play to start – by this point in my cricket watching career (and I do consider it a career) I had switched bottles of coke for pints of bitter – or lager (I can’t remember when my taste buds fully blossomed). There for the “good day out” as well as the cricket.

When play did get underway we were treated to a swing bowling masterclass. Graham Onions removed both Shane Watson and Michael Hussey with the first two balls of the day as the fans quickly forgave the injustice of the lost time. James Anderson then ripped through the rest of the Aussie lineup in fashion we would become accustomed to.

Why was it swinging so much? You might ask – It was overcast of course. As if this a sufficient explanation.

The Test match ended in a draw as the heavens opened on day three and too much time was lost. But England won the series 2-1 to win The Ashes.

What is the point of Chris Rogers? I remember leaving the ground thinking he is why Test cricket is dying a slow death. The operative word being ‘slow’. The Australian opener batted all day, scoring a century without playing an attacking shot. Where Joe Root has a 360 degree ‘wagon wheel’, Chris Rogers’ wheel featured exclusively the 45 degrees between the wicketkeeper and third man. The ‘you shall not pass’ method of batting was back with a bang – or rather, a tap.

He must have played and missed 40 times and edged the rest. He was my least favourite Australian cricketer at that point – somehow beating David Warner to the top spot. I think it was a combination of the boring batting, a complete lack of character and the nail in the cricket coffin – the sun-blocked lips.

I have nothing against sun-block per se – I remember putting a sweep of it across my cheeks and over the bridge of my nose before heading out for a ‘Test match’ as Allan Donald in our back garden. But where Donald would remind you of Arnie in Predator, or William Wallace rousing his troops before battle – Rogers had more of the Mrs Doubtfires about him.

I’ve thought a lot about luck since England’s World Cup win and that Ben Stokes deflection in particular. Has there ever been anything more lucky?

The only thing I can compare it to is Stuart Broad’s 8 for 15 at Trent Bridge. He wasn’t lucky, but I was. I wasn’t even supposed to be there. I got a call from my dad the evening before the start of the Test and took him up on his offer of a spare ticket (lucky). I could – I was a teacher in the school holidays (lucky). My train was late but I arrived just in time to take my seat as Broad ran in to start his first over (lucky – or good timing at least). I then sat and watched the best thing I’d ever seen and arguably the best Ashes bowling performance of all time (lucky).

I love Stuart Broad, more than James Anderson. Anderson is a a better bowler, of that I have no doubt, but Anderson couldn’t do what Broad did on that morning. Anderson is always pretty good. He might not be so good in one spell and then slightly better in the next but his performance rarely wavers too much from his mean. Broad however, is streaky. I love that. His ‘peaks’ eclipse those his opening partner is capable of.

One Australian came out to bat, then another, then another. He was in ‘good rhythm’, there was a look in his eye, wild horses couldn’t stop him – we were watching something really special that day. We were all lucky.

I continue my cricket watching career at Edgbaston this week – England’s batting lineup may not last the day, but I’ll still be not out.