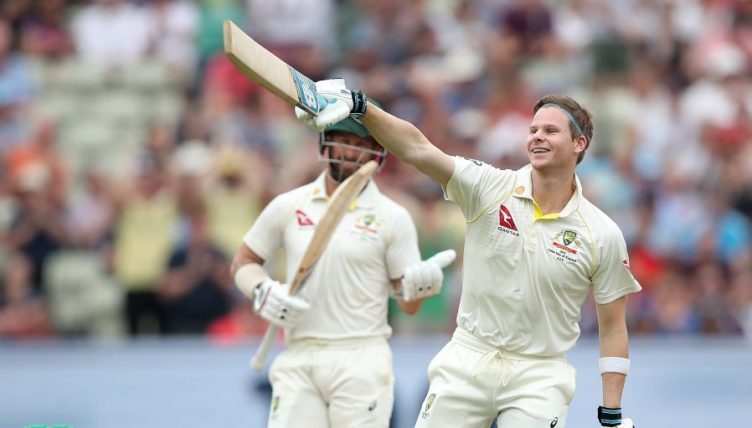 Edgbaston twin century hero Steve Smith admitted he feared at times he would never return to international cricket after a 12-month ban for his role in the ball-tampering saga.

Smith made a stunning 142 to go with his first-innings 144 as Australia took total control of the first Test – they need 10 wickets on the final day and England an improbable 385 more after they reached stumps in their second innings on 13/0.

Australia had started day four with a precarious lead of just 34 with three wickets already down in their second innings, but Smith – assisted first by Travis Head (51) and then Matthew Wade (110) moved Australia into a dominant position before James Pattinson and Pat Cummins enjoyed themselves with a freewheeling partnership of 78 to set up a declaration at 487/7.

It was a stunning performance from Australia and Smith in particular – not least given that he had already rescued them from the depths of 122/8 in the first innings.

"I love Test cricket and I love playing against England. It's a terrific place to play #Ashes cricket & I've last these last four days; it feels like Christmas morning every morning waking up!"

Watch day five of the 1st #EngvAus Test on Sky Sports The Ashes from 10am on Monday. pic.twitter.com/fNjfToN9aS

But Australia’s former captain was far from certain he would be back in Ashes action while recovering from elbow surgery as he served his year’s exile from the sport.

He said after becoming the first man since Matthew Hayden in 2002 to score hundreds in both innings of an Ashes Test:

“There was a time when I didn’t know if I wanted to do it again,” he said. “Just before I had my elbow brace taken off I just wasn’t sure if I had it in me. Funnily enough, the day I had my brace taken off, I was like, ‘Right, I’m ready to play again’.

“I’d never felt like that about cricket in my life. They were strange feelings and emotions but now I’m back enjoying what I’m doing and practising hard. To be playing for my country and wearing this cap, I’m really honoured and grateful.

🎥 @willfordy25 is back with his end of day review after day 4 of the first #Ashes Test… pic.twitter.com/EtscZaCoUB

“It’s incredibly special. Obviously I’ve been out of the game for a while. I was a little bit nervous coming into the first day.

“Normally I don’t get too nervous before a game and it was nice to get that hundred away in the first innings.

“I’ve never scored hundreds in both innings before in any form of cricket so I was pretty keen to do that and I was fortunate that things went my way today and I was able to help us get in a good position.

“It feels like Christmas morning every morning getting to come and do this.”