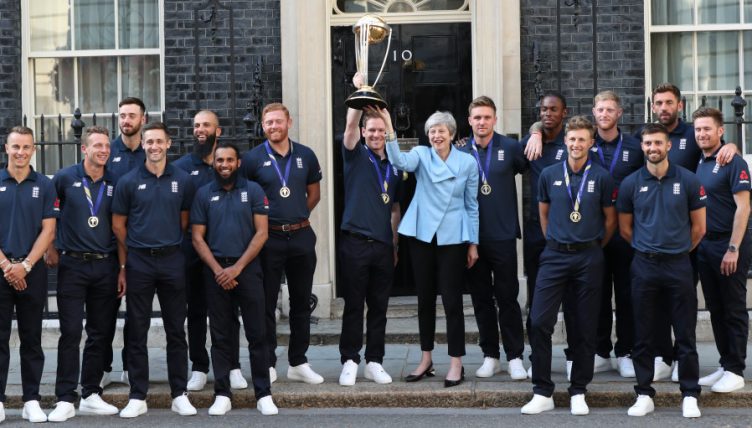 British Prime Minister Theresa May has described England’s World Cup winners as a team that represents ‘Modern Britain‘, as the players enjoyed a Downing Street reception following their tournament heroics.

England captured their first World Cup trophy in stunning fashion on Sunday to scenes of jubilation reminiscent of the 2005 Ashes series.

The maiden World Cup success, coupled with the upcoming Ashes series on home soil is hoped to inspire a new generation of cricket lovers across the nation.

Incumbent PM Theresa May welcomed the players to number 10 on Monday evening, and spoke glowingly on both the success of the team, but also the impact their exploits could have on future generations.

“You are a team that represents modern Britain, and that plays like no other side in the world,” said the PM.

“When the odds were against you in the biggest game of your lives, you simply and stubbornly refused to lose.

“It is that determination, that character, that has made you world champions. But more than that, you have made history.

“You have helped the nation fall in love with cricket once again. You have inspired countless future Morgans, Rashids and Archers.”

“I’ve woken up in better conditions, but it’s an incredible feeling,” Stokes told the PA.

“I don’t know if it’s sunk in yet but coming down here [10 Downing Street] and seeing what a small portion of the support we’ve had feels about it… the kids, the adults… these feelings are something we will hold on to forever.

“We would have been devastated if we hadn’t managed to lift that trophy, but looking back over that game, I think it will go down in the history books as the best ever with all the drama of a World Cup final. It’s an amazing thing to be part of.”

Re watch the highlights of that amazing final HERE.