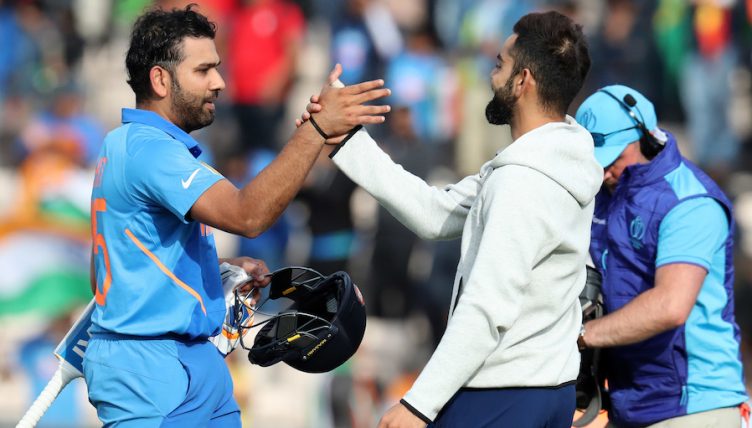 India captain Virat Kohli has hailed Rohit Sharma after his century against South Africa, calling it his ‘by far his best ODI innings’.

Sharma scored a fantastic unbeaten 122 to help India beat the Proteas at the Ageas Bowl by six wickets.

Opting to bat first after winning the toss, the Proteas struggled to gather any real momentum throughout the innings and they were limited to just 227-9 from their allotted 50 overs – a target that looked well short of what was required.

Chasing down 228, India did lose Shikhar Dhawan (8) and captain Virat Kohli, who was dismissed for just 18 after a brilliant catch from wicketkeeper Quinton de Kock off Andile Phehlukwayo’s bowling.

However, Sharma, who was dropped by David Miller on 107, batted throughout the innings and his unbeaten 122 ensured India reached their target with 2.3 overs remaining, finishing on 230-4.

“In my opinion this is by far his best ODI innings because of the kind of pressure the first game brings from a World Cup point of view,” Kohli said at his post-match media briefing.

“As a batsman when you go in and a few balls bounce like that, it is not easy to gather yourself again and play in a calm manner.

“A lot of times batsmen tend to hit their way out of the situation. But he was very composed, he was very – he’s played so many games, we expect a lot of maturity and a lot of responsibility from someone like him.

“In my opinion, of all the brilliant innings I have seen him play, I think this, for me, was the top of the pile because of the way he compiled his innings, and at no stage did we feel like, or he felt like he is going to throw it away.

“I think controlling the game so beautifully from one end and allowing the others to display themselves and string in small little partnerships, looking at the fact that they were only chasing 228, he played the perfect innings for that kind of a situation, on that kind of a wicket, against a bowling attack that was threatening to pick up wickets at any stage. So, yeah, in my opinion, by far his best knock.”