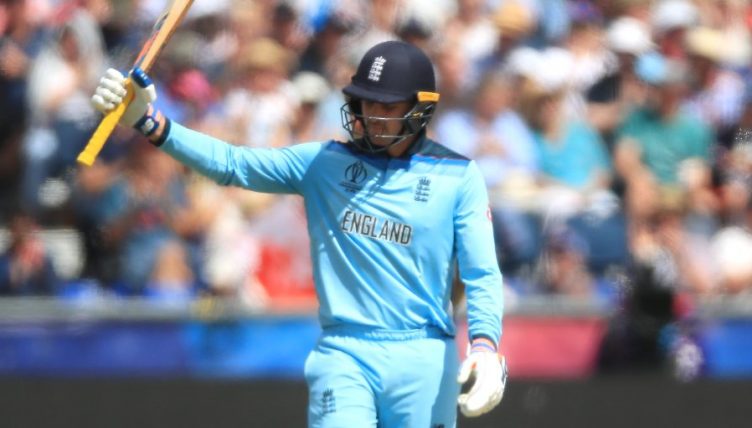 A good start to an innings is always the one sought after by the management and that is precisely what Jason Roy brings to the table. A tall right-handed batsman primarily, Roy brings much more to the batting order by being the glue.

In his absence at times, Alex Hales has filled in and slotted at the top of the order. However, the absence of Hales as a back-up opener meant only one thing that England needed to keep Roy wrapped in cotton wool.

England came into the 2019 World Cup as the No.1 ODI team thanks to their exploits in the limited overs scene over the past 12 months. They have steam-rolled past giants like India and Australia at home, thanks to the exploits of the right-handed opener and his formidable partnership with fellow right-hander Jonny Bairstow.

The way the pair batted; it gave England the perfect head-start going into the middle phase of the innings. England’s batting depth meant that they could capitalise on the start, with Joe Root, Eoin Morgan and Jos Buttler to follow in the batting order.

Early in 2018, batting first on a good Melbourne track, Australia set a respectable target of 304 at the end of their 50 overs with Finch scoring a century for the hosts. For England, their openers had to fire away from the start. Mitchell Starc, however, had other ideas, dismissing the English opener for 14 runs before Alex Hales fell to Pat Cummins from the other end.

Could Roy hold it together?

Two people who still held the key against the aggressive Australian bowling attack were Roy and Root. The duo added 220 runs together, and from 60-2 to 280-3 put England in the driving seat against the mighty Australians. Roy was at his aggressive best, and never stepped down his intensity. There was one thing that we saw from Roy that day, and that is he can play a calculated innings when the situation requires of him.

After hitting a boundary in the 10th over of the innings, Roy and Root played patiently for loose deliveries to hit which eventually came by in the 21st over of the innings. He only took the risk when it was required of him and only when the asking rate seemed to peek ahead of England. Roy’s hundred came in the 27th over when pulled Andrew Tye and ran hard and across the 21 yards thrice to bring up his fourth ODI hundred.

Babar Azam's masterclass or Jason Roy's flair? It's almost impossible to decide amongst such incredible knocks. Here's our pick for the Top-5 batting performances from World Cup 2019. Which ones were your favourite?#CWC19 #WorldCup2019 #RohitSharma pic.twitter.com/wfIXbg971r

This hundred was special, not because it came in a winning cause but because it was what was required of him at the top of the innings. He accelerated, and in double quick succession as he nonchalantly stroked the ball all over the park. In the next 16 overs, he went to 180, scoring 16 boundaries and five sixes, meaning England only needed 23 runs from the next 8 overs.

Fast-forward to the home series against the same opposition, it was England’s series to dominate in familiar conditions and a statement to make a year before the World Cup on home soil. At Cardiff, Australia were prepared to tackle Jason Roy and his willow that wielded like Thor’s Mjolnir. On the flip side, they were also aware that just like Mjolnir, Roy’s willow could cause a meltdown to the bowlers.

Batting first, the right-hander was given the license to go against the Australian attack. In the absence of Cummins and Starc, the bowlers struggled to handle the aggressive demi-god, Roy. The 28-year-old from Durban smoked the Australian bowlers to all parts of the ground and brought up his hundred in as many balls. He continued his form and played another crucial inning in the next game before being caught short of his crease for 82.

Just like Thor yelled ‘Bring me, Thanos,’ Roy yelled ‘Bring me Australian bowlers’ that summer with his Mjolnir. Next, at Durham, the 28-year-old scored another hundred against the Australians, as the Aussies were tired of seeing the same phenomenon in the incredible English summer for Roy as he ended up as the highest run-scorer in the series with 304 runs in five games.

The Pakistan test before the World Cup:

One final test for England before the World Cup was Sarfaraz Ahmed’s Pakistan. Pakistan is an undefinable commodity, who can strike gold, and bite the dust on the very same day. However, for England, it was a test against the Junaid, Hasan Ali and Shadab Khan who have were vital to their Champions Trophy victory.

It was an important series for Roy, who was fighting time to prove his fitness and consistency after a string of failure against India and Sri Lanka and his off-the-field issues with his daughter’s health. The right-hander could only play three matches in the 5-match series, but his impact was imminently visible. In the opener, the opening duo of Roy-Bairstow got England off to another flyer, with a 115-run partnership in 18 overs. Roy exited after scoring a well-made 87 runs, 13 short of a well-deserved hundred.

In the second game, Roy took off and was in a destructive form in their run-chase of 359. Alongside Bairstow, Roy tonked the ball off the corners to give England the platform for Stokes and Root to follow with a handy innings as Bairstow held the crease at the other end. After his return from visiting his ill daughter, Roy went one dimensional and absolutely creamed the ball off the sweetest spot of the bat and was on the receiving end of a thunderous round of applause and a standing ovation for his return to the batting fore for England.

The crowd could only imagine what was coming in the World Cup, and for Roy, the knock turned ever-so-sweeter after his long night beside his daughter. One thing was clear that day, that England and Roy were made for each other, more than what a romantic tale would tell you.

England’s opening encounter was against tournament favourites South Africa. Proteas skipper Faf du Plessis elected to bowl first after winning the toss and had plans for the English openers.

The Proteas skipper introduced their talisman and leggie Imran Tahir up against the English openers in a bid to dismiss the right-handed Roy. The plan worked, and South Africa got the wicket, not of Roy, but his partner Bairstow who knicked the leggie to the keeper. It was not the start that the English openers dreamt of, and Roy at the other end had to be content with rotating the strike alongside Joe Root.

Jason Roy and Jonny Bairstow, the first pair ever to have 4 100-plus stands in a World Cup #CWC19 #ENGvAUS pic.twitter.com/DMraWrCKbz

Proteas’ Andile Phehlukwayo was successful in dismissing Roy when the opener negotiated the spin trouble at the other end. As he walked off the park, Roy was visibly dejected with himself as he kicked the ground in dismay. In the very next game against Pakistan, Roy exited early this time to a spinner in Pakistan’s Shadab Khan. England’s woes with leg-spinners and the new ball continued in the tournament.

Two failures after, at Cardiff, in their third league game, the scene was set for the openers to tee off and they did just that. Roy showed why he is one of the most entertaining openers in the World Cup, in the game against Bangladesh. Mashrafe Mortaza’s attempt to begin with a spinner did not result in a wicket, as the openers got off to a careful start. Post the four over mark where the openers got set in the crease, the carnage began in the field, with the Kookaburra ball flying just like its namesake. At the end of ten overs, England were already racing at 67 with the openers set for a big inning.

While Bairstow soon fell prey to a leading edge, Roy did not give up after reaching his half-century. In the 27th over, the opener completed his century in just 93 deliveries to get the crowd roaring. The show was not yet over, as the real show began in the 31st over where the right-hander stepped down the crease and creamed Shakib for two boundaries and a six. Against Mehidy Hasan, he just bettered his own tally by sending the Kookaburra far south with three massive sixes to reach his 150 in sublime style.

Up next was the Caribbean party, which Jason Roy would have enjoyed if not for the hamstring injury that he suffered. It was not just an injury for Roy, but also for the entire team. The team looked broken in his absence, as they crashed in the game against Sri Lanka and Australia with a major blip in the opening partnerships. There was chaos in the camp, as they were under pressure for the first time in the tournament and Roy was absent when they needed him the most.

After missing three games for England, Roy and Bairstow returned at the top of the batting order for England in their must-win game against India and the result was immediately visible. On a nice bright day in Birmingham, the English openers walked out like Thor and Captain America against Thanos in Avenger’s Endgame.

As Roy wielded his Stormbreaker against Bumrah and co, Bairstow used Mjolnir and England were in their endgame. Batting together for the first time since the Bangladesh game, the duo got England to a racing start with some luck going in their favour. At the end of the 16th over, England were already 112 for no-loss against one of the top bowling sides in the tournament with Bairstow being the boundary clearer as Roy played it late and fine.

In the next five overs, England added on 43 more runs as the Indian spinners looked clueless like Thanos’ army in the Endgame. Just as the openers looked on to get to 200 runs for the opening partnership, Ravindra Jadeja had other ideas as his screamer ended Roy’s brilliant innings.

Roy was back and visibly more determined, hungry and a vital component of the English side well-oiled after his hamstring injury. For England, it was good news in the endgame as the duo of Roy and Bairstow were back to doing what they do the best, scoring runs at a pace that could take the team to 400 after 50 overs.