Mohammed Shami: A warrior who never backed down 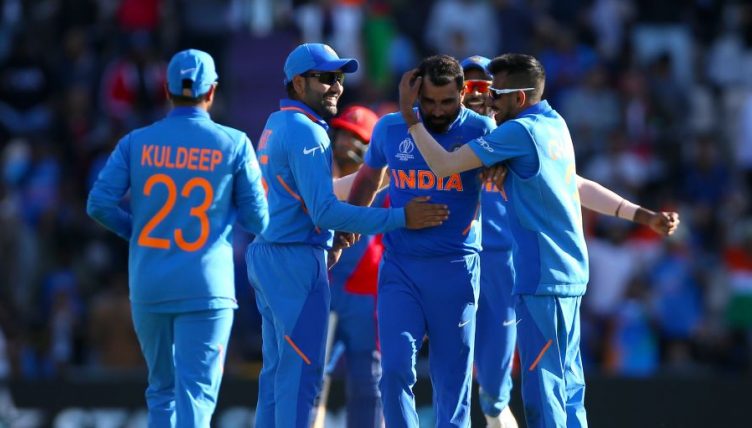 In a world full of Jasprit Bumrahs and Mitchell Starcs, it is tough to be a Pat Cummins or a Mohammed Shami. However, neither Cummins nor Shami have backed down from giving their best when their team needed them the most.

Walking into the team when opening bowler Bhuvaneshwar Kumar was injured, Shami had to get going from the word ‘go.’ The right-armer marked his run-up as he picked up the white ball for the first time in the 2019 World Cup, his torturous past 18 months was at the back of his mind. His goal though was concise and clear, to get India off to a nipping start on a deck that allowed seamers some movement.

Up against Shami was one of Afghanistan’s most perilous batsman, Hazratullah Zazai taking crease in their pursuit of a meagre 225 runs. The first ball zipped, bouncing on a good length just wide of Zazai’s swinging blade. Slowly but steadily, Shami began to produce more steam in his run-up with the speed-gun a little short of the 140 kmph mark. After missing five deliveries on the trot, Zazai finally found to make a connection between the bat and the ball for a single denying Shami a maiden on his World Cup comeback.

The 29-year-old charged in for his second over, bowling lengths that hit the splice of the bats. The signs were ominous for the Afghani batsmen, as Shami crossed the 140-mark for the first time in the innings. Two deliveries after he hit the 140-mark, Shami bowled a peach of a delivery which pitched marginally outside the off-stump and hit the batsmen right in front of the stumps. It was visible that Shami got better on and off-the-field with endless hours spent in the training sessions. The question was whether he could prove himself worthy of replacing Bhuvneshwar in the playing XI, with a place on offer.

While Naib and Zazai were hoping to get past the storm, they were making Shami and Bumrah more deadly with the ball. Bowling from the round the wicket, Shami swung one with raw pace on the stumps which Zazai wanted to pummel over mid-wicket only for the delivery to re-arrange the stumps. Shami further met the new-comer Rahmat Shah on the crease with another breezy delivery before allowing the right-handed batsman to get off the mark before Shami was given a break.

Shami finished the 2015 World Cup as India’s second-best wicket-taker next to only the man he replaced on Saturday against Afghanistan. More importantly, Shami played through pain and a career-threatening injury. Turn back the clock to a few months before the World Cup, it was in the Australia series that he aggravated his injury and made him run gingerly.

“I was landing in the exact same spot as the Australian spinner [Nathan Lyon] did,” said Shami to ESPNCricinfo following the news of his injury. “That landing spot was up and down. It resulted in swelling. It kept on getting worse, but in the end, it came to a stage during the World Cup where I found the momentum and the team found the momentum, and we didn’t want to lose that.”

Shami would have fluids sucked out of his knee which required surgery and probably put him on the bed for the next few months. It was a well-deserved rest, as he had gone through thick and thin on the field with his knee. The then 25-year-old Shami had to miss the Indian Premier League for the Delhi Daredevils.

Hard work and Patience were two ‘virtues’ for Shami through his time away from being on a cricket pitch donning a jersey. Shami missed the long home season for India, but more importantly toiled hard in hot and humid conditions to gain fitness, to become better than he was before his injury and took nine months in time for the right-hander.

While things looked better for Shami, it was not always going to be glitzy and glamorous as a fast bowler in the World of Cricket. In the first practise session in Perth ahead of the series against Australia, the then 25-year-old injured his hamstring and that meant another four-to-six weeks of bed-time and recovery and never made a return to the ODI scene till the away tour to West Indies in 2017, where he picked four wickets in the three matches.

Sporadically, Shami was seen in the limited overs format for India as he mustered two more appearances in 2018. On March 7 2018 troubles off the field saw his name being withheld from the official BCCI contracts list.

A clouded 12 months not only raised doubts in his mind but also in the minds of the Indian cricket fans. However, as they say, Warriors are not born rather they are made through trial, pain, suffering and hard work.

Shami made his return to the bowling crease after Afghanistan gained momentum in the middle overs with Mohammed Nabi playing a handy innings against the all-conquering Indian team. With 88 runs required from 14 overs, Nabi knew he had to play and play it long for the team and Shami had to unleash himself with the ball.

@MdShami11 it’s been a joy to watch you bowl in the last 3 games. Loved your first spell and especially the consistent upright seam position. You are surely due for luck in the coming games. #ICCCricketWorldCup

Shami ran and ran to get back to the form he hit early in the innings. This was only the start of the next few crucial overs for India. Najibullah Zadran did not pay heed to Shami’s early innings form and crashed the white ball around the park. He was replaced by Yuzvendra Chahal the very next over, as India looked to get through the overs.

It boiled down to the last four overs, and 32 runs for the Indian duo of ‘Goku’ Bumrah and ‘Vegeta’ Shami to defend against the long-standing ‘Jiren’ Nabi. Afghanistan managed to get 16 of the three overs and left Shami to defend 16 against Nabi.

Shami put the extra yards and delivered almost the perfect delivery up front, the important word being almost as Nabi drilled the ball down the ground for a boundary. One brings two and two brings another. For Afghanistan, one boundary was already there, and it looked like Nabi would get the second and the third.

However, Shami channelled his inner ‘Vegeta’ and hit the right length to make Nabi hit the ball straight down the throat of the long-on fielder Hardik Pandya. Shami was not content and went ‘Super Saiyan’ only like Vegeta’s fight against Android 18 and 19. Two crashing yorkers and two wickets and game, set and match for India and Shami became the second Indian after Chetan Sharma to take a hat trick in the World Cup.

What a finish! Shami seals his hat-trick by bowling Mujeeb with a perfect yorker!#TeamIndia beat #AfghanAtalan by 11 runs.

Shami’s second outing did not go well with the bat. Coming into bat, with 8 deliveries in hand the right-hander’s glove was stung by a Sheldon Cottrell banger and walked back for a twoball duck. However, with the ball, he had 268 runs to defend against the likes of Chris Gayle and Shai Hope.

Gayle walked out arguably in his last World Cup encounter against India, and up against him was a pumped-up Shami. Both were aware of each other’s exploits as they stared at each other before the innings began. The fourth ball from Shami was near perfect, jammed the inside part of Chris Gayle’s bat and raced to the boundary to put runs on board for the Windies.

Shami was up and running and nearly brought the downfall of Sunil Ambris when his delivery cut the batsman in half. The 29-year-old was getting the ball to talk, and soon delivered the telling blow. Running in in his third over, his delivery on the shorter length hit the splice of Gayle’s willow to find Kedar Jadhav reverse-cupping a simple lob. Shami followed it with a ripper and made the batsman snort the delivery as the right-hander looked like a Warrior on a journey.

The best was yet to come, and it arrived in the 7th over of the innings. Pitching in just outside the off stump, the ball nipped and hit the top of the middle stump much against the hope of Shai Hope taking all hopes away from the Windies. For many parts of his life, Shami has made the comeback at the right time and this time his delivery came back in at the right time. If there was ever an ideal delivery for a right-arm bowler, this would be it, the Shami special on a hot Manchester afternoon before he was taken off the attack.

🎙 "What a bowler Mohammed Shami is!"

After Bumrah’s blitz with the ball yielded a double-wicket maiden for Virat Kohli as Shami was licking his lips to go next against the Windies tail. Shami charged and bowled one of the most ordinary deliveries that he bowled in the game which resulted in another wicket for the right-hander. Hetmyer picked the only fielder in the ring on the leg-side to give Shami his third wicket in the run-chase.

Kohli immediately removed both Shami and Bumrah and gave Kuldeep and Chahal a chance to wrap the innings. However, it was written in the stars that Shami to get his eighth wicket in the tournament in just his second game.

A deja vu moment for Shami as he bowled a snorter kissing the glove of Oshane Thomas, just as the one that was aimed at him in the first innings for an easy catch to Rohit Sharma. The second innings was only rewarding for Shami and deservedly so showed what he is capable of, consistency, accuracy and more importantly RAW PACE. We are yet to witness Shami’s Super Saiyan 3, which makes things more auspicious for India.