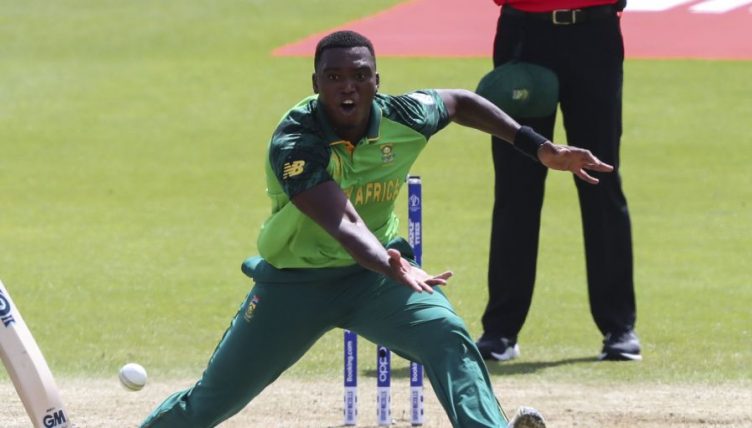 South Africa’s early woes have been compounded with the news that paceman Lungi Ngidi will miss Wednesday’s crucial encounter against India with a hamstring injury.

The contest has become all-but a must-win for the Proteas having tasted defeat in their opening two matches versus England and Bangladesh.

Team doctor Mohammed Moosajee described the extent of the injury, saying: “Ngidi suffered a sharp discomfort in his left hamstring. We decided he had a hamstring strain. He will be out for at least a week to 10 days.

“He will have a scan tomorrow [Tuesday] and hopefully be ready for the West Indies game.”

Fellow fast-bowler Dale Steyn remains a doubt for the occasion as he continues his recovery from a persistent shoulder injury.

There was a ray of hope for the beleaguered South Africans, however, as top-order linchpin Hashim Amla appears set for a return to action following a concussion sustained from a vicious Jofra Archer bouncer.

With six wins expected to be required to secure a semi-final berth, or at the very least five wins and a healthy net run rate, South Africa cannot afford another subdued performance versus the heavily favoured India.

South African captain Faf Du Plessis spoke of a need for players to take responsibility for their early setbacks, saying: “If guys think they can make excuses for performances like today then they will be challenged – that’s a fact. All I can say is that we’ll keep fighting.

“I’m extremely disappointed and gutted to say that all formats of our game at the moment are just not firing.

“To blame bad luck is not just an option for me. You still have to find a way to put in performances and we’re just off in some areas.”

A number of batsmen made starts but in classic Proteas fashion, submitted to pressure before their innings could develop into a match-winning effort.

Du Plessis shouldered the blame as he stressed the importance for individuals to convert starts into match-defining performances, saying: “With the bat once again we looked good, did some good things, but myself included, you need to go through and score hundreds, that’s what wins you matches, not 30s and 40s.”

With a depleted bowling attack, Du Plessis admitted the need for alterations to be made, both to personnel and tactics: “Plan A’s gone. It’s gone because Plan A was those bowlers playing together.

“They haven’t played a game together on this tour. Now you’re moving into your all-rounder territory, you’ve got two medium pace all-rounders and Chris Morris between the two.

“Now we have to look at all our options, reshuffling all our cards and seeing what we can do with it.

“I have to believe we can still win the tournament. I wouldn’t be South African if I said no to that.”

It’s difficult to call the third match of a nine-match group a ‘must-win’, but if South Africa are to finally end their long-running drought for silverware, Wednesday’s clash with India certainly feels that way.