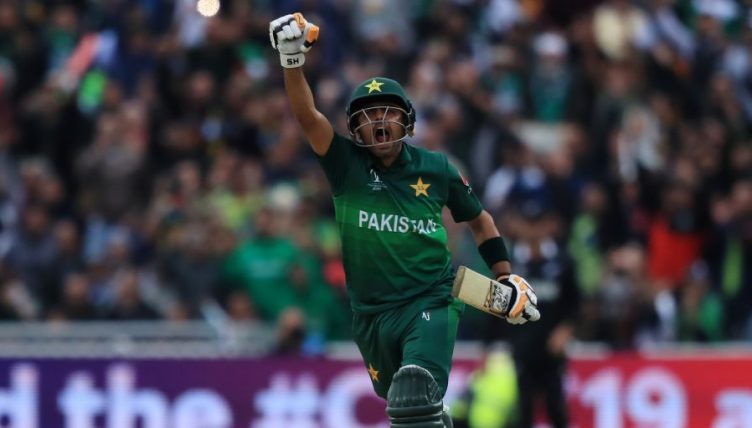 Babar Azam felt a clear sense of relief as his clutch unbeaten 101 guided Pakistan to victory over New Zealand at Edgbaston on Wednesday.

The top order batsmen anchored the innings and helped towards providing a sense of stability after opening pair Imam-ul-Haq (19) and Fakhar Zaman (9) were both removed cheaply.

The victory kept Pakistani hopes of progressing to the semi-finals firmly alive, and with favourable fixtures to come in contrast to current top four incumbent England, Pakistan will now see themselves as frontrunners to qualify for the knockout stage.

Despite boasting a lofty ODI average north of 50, Babar had come under fire for not producing performances when it really counted.

That line of thinking was something that had clearly not eluded Babar, as his post-match comments indicated: “It was in my mind that I’m not finishing these matches,” said Babar.

“When me and Haris were batting we had a plan to carry on the innings, and we have done that. It was a difficult pitch to bat on as it was spinning a lot.

“(Mohammad) Hafeez and I had a plan before to see off the spinners’ overs and attack the fast bowlers.”

Comparisons have been made to Pakistan’s run to glory at the 1992 World Cup.

The journey of ‘loss, win, N/R, loss, loss, win, win‘ has been replicated in the 2019 version, but Babar was keen to put a lid on expectations and focus solely on the task at hand.

“Everybody contributed a lot and we are very focused on this,” said Babar.

“We are confident of taking it match by match, and hopefully we will qualify.”

Pakistan’s next encounter is with Afghanistan at Headingley, Leeds on Saturday where nothing but a win will suffice if echos of 1992 are to continue.

To read the permutations of who can still qualify and how, click here.