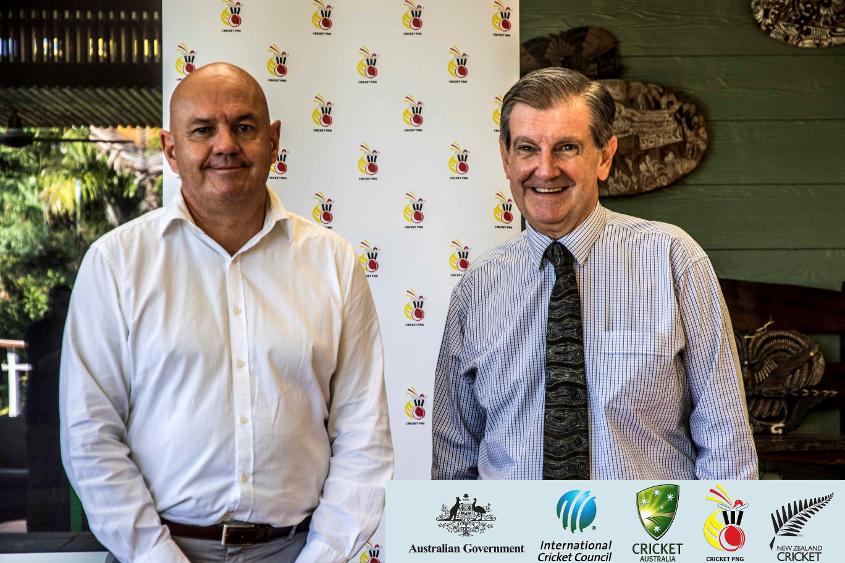 The International Cricket Council (ICC), Cricket Australia (CA), and New Zealand Cricket (NZC) in partnership with the Australian Government have made a significant investment into cricket in Papua New Guinea through the ICC Cricket World Cup Community Facility Fund where 48 community cricket facilities will be built in eleven provinces.

The Cricket World Cup Community Facility Fund is a joint legacy project by the ICC, CA, and NZC following the ICC Cricket World Cup 2015 to help address the need for more facilities and significantly boost participation rates in cricket.

A total of $400,000 was put into the Fund by CA ($200,000), NZC ($100,000) and the ICC ($100,000) which will result in $800,000 of investment into facilities in the East Asia-Pacific region through fund matching for all projects. To date more than $80,000 has been invested in community facility projects across the region to aid the development of cricket with yesterday marking the roll out of the biggest project yet.

The ‘Cricket Facilities Enhancement Project’ is a collaborative project that will see 48 community cricket facilities built in eleven provinces across Papua New Guinea over the next two years.

The ICC’s General Manager – Development, William Glenwright believes that facilities are crucial in the growth of cricket and that it will provide a significant base for new participants to play the game and that projects like these highlight the power of successful partnerships.

“I am delighted to see the significant investment into one of our High Performing Members. This joint project between two Full Members, the ICC and the Australian Government shows the commitment across the cricket fraternity to grow the game.

“It also shows the importance of ICC events and their role in the development of the game across all 104 Members of the ICC,” said Glenwright.

Cricket Australia’s Chief Executive James Sutherland is proud to support the project in PNG because it demonstrates the positive legacy of hosting major ICC events in Australia. “This project complements Cricket Australia’s strong support for the Australian Government’s Sports Diplomacy Strategy and sport for development initiatives in the Pacific

“We are committed to supporting the long-term growth of cricket in as many countries as possible, as shown by our strong support for this region over the last 15 years,” said Sutherland.

“NZC supports wholeheartedly the philosophy of growing the world game, and connecting countries and regions through the spirit of cricket. This initiative should go a long way towards boosting cricket in PNG – in terms of both participation and resourcing.

Currently Cricket PNG has over 190,000 boys and girls, men and women involved in cricket programs around the country with a vision to make cricket PNG’s favourite family sport. While the sport is proving immensely popular among school children, the lack of dedicated cricket facilities has made access to cricket competitions difficult in many areas.

For Joe Arua, a 14-year-old school student from Central District province there is potential, passion and love for cricket in the school and community. “One thing that prevents us from playing more cricket is an oval without a cricket pitch. It would be great if we had a cricket pitch in our school to be used by the community as well,” said Arua.

Cricket PNG Chairperson Helen Macindoe believes this is arguably the biggest infrastructure project that Cricket PNG have been involved in since Cricket PNG was formed in 1973. “Last year we were able to upgrade the Amini Park facilities but this project will help with the development of cricket nationwide, in line with our vision to be PNG’s favourite family sport,” Macindoe concluded.

Construction on the ‘Cricket Facilities Enhancement Project’ will begin immediately in the National Capital District with the first pitches expected to be ready for communities in the second half of the year.