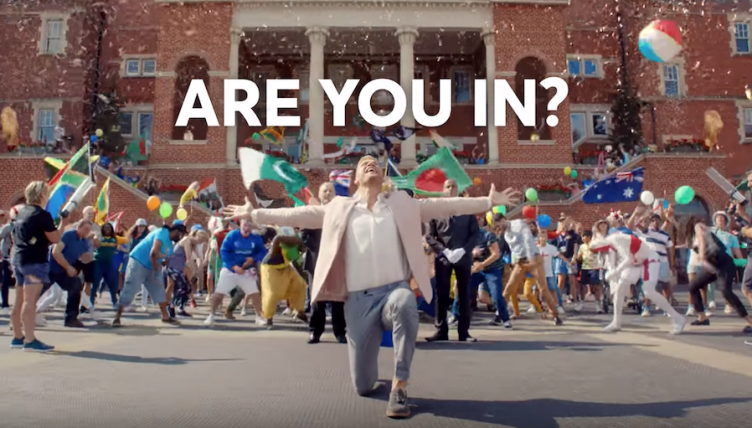 The Cricket World Cup is on the doorstep, and there is a huge amount of expectation being placed upon the home nation England.

Admittedly, the video we are about to dissect is now over six months old, but frankly it’s more relevant to have a gander at it now. That, and we’ve only just seen it now.

Long story short, it’s a shocker. The idea is Baywatch; the execution is more Crimewatch. Here is the video in question, and seven reasons we are forced to have a little laugh at it…

The first 30 seconds from a vocal standpoint are utterly painful. It turns out it’s quite hard to get a broad Lancastrian to sing the solo from an upbeat dance number, who’d have thought it?

The absolute best bit is from around 15-17 seconds, when Fred attempts to hold the note on ‘moving’ – but the fact he’s, you know, not a natural singer coupled with what we can only guess is autotune means it sounds more like ‘mOoooOOOOooOving’.

Even Radio DJ Greg James (00:26) had his headphones on to block out the noise. More Freddie Kruger than Freddie Mercury…

Once Freddie’s star solo is over and the chorus comes in, we are treated to a procession of really random dance moves. Obviously there has to be some movement from the backing crew, but what’s with all the throwing the arms in the air etc.?

Also, Freddie fist-pumping every time there’s an ‘Ay’ makes it feel a bit more like a football chant than a classic summer anthem to remember cricket’s greatest tournament.

It’s hard to take your eyes off Flintoff as he struts through various parts of England in the space of 100 seconds, but a quick look into the background produces some horrifying sights.

There’s England’s answer to Cool Runnings at 0:40, while a man dressed as a lion is holding a Kangaroo and walking arm-in-arm with Tiger Ali at 0:47. Men on stilts with giant bats at 0:53, the beefeater and the knight outside the Oval at 1:07, the list goes on…

Sorry Fred, this is the last one solely about you mate. But what is going on with that outfit? It’s the most middle-class summer garden party assembly of garments we’ve ever seen.

White shirt? Classic. What even is the colour of that jacket though? And to pair it with grey-blue trousers and some dark slip-ons is frankly superb. It certainly takes some attention away from Matty Hayden’s mid-life crisis ensemble at the inaugural Big Bash bat flip.

We get it, the two lads at 1:20 are meant to resemble umpires, and the umpire signals are meant to constitute dance moves which the masses below then replicate.

That isn’t at all what it looks like though, let’s be fair. It looks like the Pet Shop Boys are bringing a plane in to land, or asking you if you fancy a tea, coffee or an overpriced cheese toastie.

They’ve even given Kumar Sangakkara the lowest point of his career (1:22).

A really random bunch of celebs have been crow-barred into the video, which is actually quite comical. As mentioned, Greg James makes it in, Ryan Sidebottom is on the right at 0:48 (sorry, bad joke), while former England Women’s captain Charlotte Edwards appears at 0:56.

It wouldn’t be cricket without Phil Tufnell somehow getting in (1:15), and Sangakkara sacrifices all his dignity eight seconds later.

Don’t get me wrong, we’re not saying that none of them deserve to be there, but it’s just such a random group.

The scariest thing about it all is that people … actually seem to like it? A quick look at the comments section (once you scroll past the thousands of India and Pakistan fans arguing with each other) reveals that there are a fair few folk who are a fan of Freddie’s effort and the fact that an Imagine Dragons song is used.

Oddly, there also seems to a be a lot of people declaring that they will support a country other than their own in the tournament. YouTube comments sections are weird places.