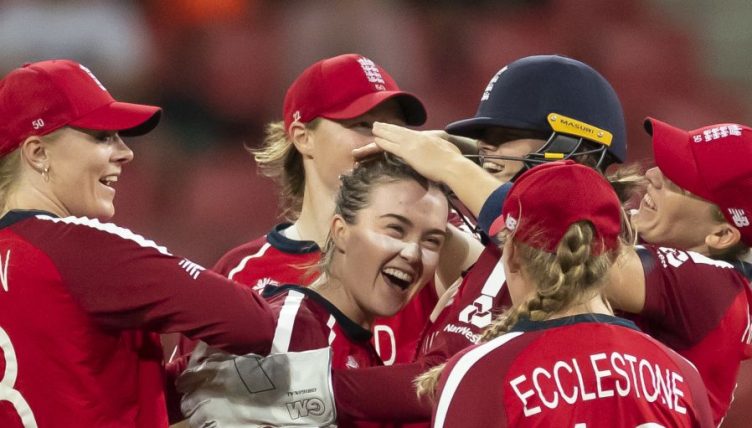 England eased into the semi-finals of the Women’s T20 World Cup with a 46-run victory over West Indies in Sydney, while South Africa are also through to the last four after beating Pakistan.

Nat Sciver built a winning platform with her third half-century of the tournament as England made 143 for five and spin twins Sophie Ecclestone and Sarah Glenn wrapped up matters in comprehensive fashion.

West Indies managed just 97 in their reply of 17.1 overs, with captain Stefanie Taylor forced to retire hurt on 15 and unable to return to the middle.

South Africa are also through to the last four after maintaining their 100% record in Group B with a 17-run win over Pakistan. They are level on six points with England but still have a game left to play. Victory over West Indies in that one will see them top the group, while defeat would leave England top of the pile.

India are also already through to the semi-finals with a flawless record in Group A, with hosts Australia taking on New Zealand in a virtual quarter-final in their final group game on Monday.

England won the toss at the Sydney Showground and moved Tammy Beaumont up the order to open instead of Amy Jones.

But Beaumont’s promotion backfired as she was dismissed lbw to the fourth ball of the innings from Shakera Selman for a duck.

Danni Wyatt and Sciver responded positively to that setback to reach 39 for one at the end of the six-over powerplay.

Wyatt had made 29 from 27 balls when Selman took a brilliant catch diving forward at long-off off Anisa Mohammed.

West Indies were producing a disciplined bowling performance, but Sciver and Heather Knight were beginning to accelerate when disaster struck.

Knight attempted to take a quick single, but she did not dive into the crease and was left stranded by Selman’s direct hit from midwicket.

Fran Wilson quickly holed out to Hayley Matthews for three and England were in need of a fast finish at 97 for four in the 16th over.

Sciver provided late impetus, although she was almost brilliantly caught for 49 by the diving Matthews at midwicket off Taylor.

The Taylor-Matthews combination did eventually account for Sciver, whose 57 from 56 balls was her eighth T20 half-century.

But Jones (23 not out) and Katherine Brunt (10no) steered England to the best score of the competition at the Sydney Showground.

West Indies’ reply was soon in trouble as Deandra Dottin swept Ecclestone to Sciver at midwicket and went for nine.

Matthews and Taylor patiently built the innings before the game’s turning point arrived at the end of the eighth over.

Taylor, who had made 15 from 18 balls, appeared to pull a groin muscle seeking a quick run and was taken from the field on a medical buggy.

That sparked a batting collapse as the West Indies lost three wickets without scoring in the space of 13 balls.

Matthews miscued a wild heave and was bowled by Glenn before Mady Villiers, bowling her first World Cup over, took a brilliant return catch to remove Shemaine Campbelle.

Chedean Nation then edged a skidding delivery from Glenn and Jones took a smart catch behind the stumps.

West Indies suffered another injury as Britney Cooper rolled her ankle and batted on in discomfort before Lee-Ann Kirby was dropped on 11 and 13.

But Sciver held a looping top edge as Kirby went for 20 to become Anya Shrubsole’s first victim with the score on 68.

The procession of wickets continued as Cooper was stumped off Ecclestone and Afy Fletcher and Aaliyah Alleyne were run out.

Ecclestone bowled Mohamed with a beauty to clinch victory and finish with figures of three for seven from 3.1 overs, while Glenn took two for 16 from her four overs.

Captain Knight told Sky Sports: “We knew it was going to be a slow wicket but we’ve played on a lot recently, having been in Malaysia.

“We knew we had to play clever and keep it simple. We ran really well, I thought we did that brilliantly.”

Explaining Jones’ move down the order, Knight added: “Amy’s had a few low scores and we felt we wanted to change something. She’s still very important for us but it didn’t come off for Tammy.

“We’ll have to sit down and have a look at our best line-up for the semi-final.

“We’ve been playing good one-day cricket from the second game so hopefully we can carry it forward.”