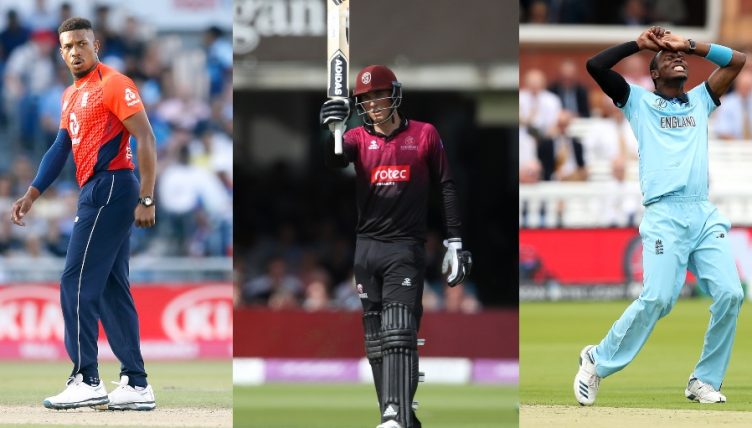 After an astoundingly entertaining 2-1 series victory over South Africa, England have just six T20 internationals before the World Cup starts in October. England will be among the favourites for the tournament with the incredible firepower and strength in depth they possess, but the lineup is by no means settled and questions remain. We’ve got five of those questions…

Who is going to be the sixth batsman?

Jos Buttler, Jason Roy, Jonny Bairstow, Eoin Morgan and all-rounder Ben Stokes are all but certainties, leaving one place up for grabs in the top six.

Joe Denly did nothing to enhance his claim for a spot in England’s first XI against South Africa. His inclusion ahead of Dawid Malan for the opening two T20’s was odd. Scores of 66 and 87 in the ODI series just before no doubt drove his selection, but he averages under 10 with a top score of 30 in the shorter format. Two further failures against South Africa and the 33-year-old may well have played his last T20 for England.

Malan however, has an outstanding England record, averaging 52 with a strike-rate of over 150. But Morgan’s comments following Malan’s bid to finish not out after scoring England’s fastest T20 century against New Zealand in November, may shed some light as to why Denly was in ahead of Malan.

Morgan said: “If we get guys that are not running off the last ball of the game because they want to get a not out, there’s something to address.”

Of course, we’re willing to bend to any Morgan hunch – who are we to question the great man? – so it may be time for Tom Banton…

Where can they get Banton into the team?

Please, please get him in. Despite some thoroughly entertaining cricket from England in the Test matches, ODI’s and T20I’s in South Africa, little has provoked as much joy as Banton’s half century for Brisbane Heat against Sydney Thunder in the Big Bash this winter.

Banton pulled the first delivery of the match, bowled by fast bowler Daniel Sams, for six, and had 14 runs after three balls, audaciously reverse-sweeping the third. Having watched batting partner Chris Lynn smash a few at the other end, Banton then battered off-spinner Arjun Nair for five consecutive sixes in the fourth over. His 16-ball fifty was the second fastest in BBL history.

Tom Banton’s incredible 5️⃣6️⃣ in just 1️⃣9️⃣ balls for Brisbane Heat is something else! 😱 pic.twitter.com/5AVWg6bbiu

The question shoudn’t be whether Banton should play, but rather where England should fit him in. The disdain with which he treats opening bowlers would suggest he should come in at the top of the order. Him and Roy, backed up by Bairstow at three is a mouth-watering prospect. And despite Buttler’s success opening up in the series win over South Africa, having his experience along with Morgan and Stokes in the middle-order provides an almost ludicrously brilliant combination of brutal power and low heart-rate capable of chasing down any score.

Can they find a place for Joe Root?

No, nor should they try to.

Wood, Archer, or both?

Chris Silverwood has said Wood and Archer may take turns in the England side. He said: “Maybe they can play one on, one off – every now and then they play together. That’s an exciting prospect.”

He clarified he was talking predominantly about Test cricket, and in T20’s it’s unlikely to be necessary for either to sit out games to save their ailing bodies. Archer should be the first name on the teamsheet assuming he’s fit for the World Cup. It’s sometimes easy to forget – given his outstanding start to his international career in Test and ODI cricket – that T20’s are his speciality. His mixture of frightening speed, yorker accuracy and slower ball variations make him both a match-winning wicket-taker and brilliant death bowling option.

And although Wood has clearly been working on his own variations in T20 cricket, his inconsistency may rule him out, as Morgan packs his side with as many multi-skilled bowlers as possible…

Who is going to bowl at the death?

England have two brilliant spinners in Moeen Ali and Adil Rashid and the luxury of all-rounder Stokes as a fourth seamer – who could, but ideally won’t, bowl at the death.

It’s a real shame Pat Brown was ruled out of the South Africa series with a stress fracture. The standout bowler in the T20 Blast for the last couple of seasons for Worcestershire is wonderful to watch, with his full-pace delivery the surprise amid a barraging variety of slower balls – as useful as an opening bowler as he is at the death.

But with just six games to play before the World Cup and with Morgan searching for consistency, the 21-year-old may now have missed his chance. His time will come, but not yet.

Both Tom Curran – with his oustanding final over effort at Kingsmeade – and Chris Jordan – with 2-28 at Buffalo Park – have at times been great at the death for England, but have also been smacked around.

Morgan is clearly keen to have both in the side, with Curran adding a bit of batting depth along with his golden-arm Curran genes, and Jordan providing what could be crucial T20 franchise experience as well as his magnificent fielding ability. But do they represent the weak link in this England side?

Archer coming back will certainly help in this regard. He will bowl the last of the innings, as well as the inevitable Super Over, as England beat New Zealand in the final at the MCG in November… But who will bowl the second-to-last over?

What a headache! Can’t find a place for Tom Banton and Chris Jordan a weak link in a T20 team… Think they’ll be alright.