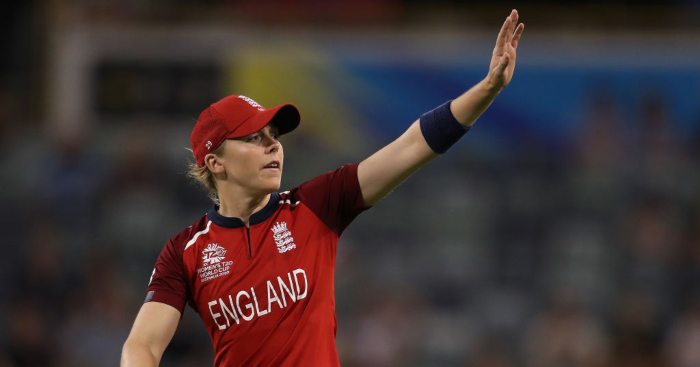 The 2009 champions opened with a six-wicket defeat to South Africa but are now up and running in Group B.

Knight led the way after England endured a shaky start having been put in to bat.

Amy Jones and Danni Wyatt were both dismissed for ducks before Knight (108 not out) combined with Natalie Sciver’s unbeaten 59 to reach the end of their 20 overs on 176 for two.

Thailand’s response was meek, with opener Nattakan Chantam hitting 32 from 53 deliveries as her team ambled to a total of 78 for seven.

Anya Shrubsole took three wickets for 21 runs, while Sciver shone again with ball in hand, finishing with figures of two for five from her two overs.

Our 1st cricketer to do all three! 🦁 pic.twitter.com/CNNNkdP6Nl

Knight’s century continues her recent fine form in T20s and also makes her the first woman to score hundreds in all three international formats. She is also the first England player to do so.

Speaking in the post-match presentation, Knight said: “I don’t often score quicker than Nat, she’s usually the one taking on the game.

“The partnership was the key thing, I think. She obviously started very quickly and then I sort of caught up a little bit at the end and I think I hogged the strike a little bit as well.

“Nice to get that big partnership and put a decent total on the board that was defendable in the end.

“It was all about getting the job done today and we did that.”