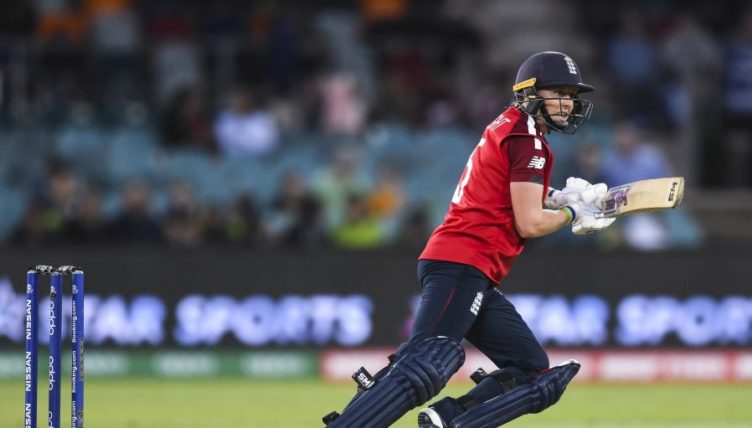 England captain Heather Knight again led from the front as England made it back-to-back wins at the Women’s T20 World Cup with a 42-run victory over Pakistan in Canberra.

The 29-year-old followed up an unbeaten century in Wednesday’s triumph over Thailand with a 47-ball 62, which included four dropped catches, to lift her side to an imposing 158 for seven.

That total proved way beyond Pakistan’s reach, with a solid England bowling display dismissing them for 116 following a T20 international career-best three for 15 from Sarah Glenn.

Pakistan won the toss and their decision was immediately justified when Amy Jones was trapped lbw by Diana Baig in the first over.

But Danni Wyatt and Nat Sciver joined forces to take the attack to Pakistan with a brutal 43-run second-wicket stand in less than five overs.

Wyatt fell for 16, caught at point, and Sciver was the victim of a sharp leg-side stumping by Sidra Nawaz off Aliya Riaz to depart for 36.

That left Knight and Wilson to take control of the match in an impressive partnership of 57, with the skipper dominating.

She was put down twice before reaching a 32-ball half-century, guiding England to 115 for three with five overs remaining.

England lost four wickets going on the attack, including Knight after she smashed eight fours and a maximum, but added another 43 runs to put the pressure on their opponents.

Pakistan found it tough in the opening powerplay, which brought only 35 runs, with Shrubsole bowling Muneeba Ali and Bismah Maroof caught behind trying to ramp Katherine Brunt.

Things got worse as spinners Glenn and Sophie Ecclestone turned the screw in the middle overs, taking five wickets and conceding just 27 runs in their eight overs.

READ MORE: Wood ruled out of Sri Lanka tour with side strain

Glenn bowled Javeria Khan and Iram Javed and, after Ecclestone pinned Nida Dar lbw, she had Umaima Sohail caught by her fellow tweaker.

Riaz provided some late resistance, hitting five fours and one six in a 33-ball 41, but Ecclestone, Shrubsole and Brunt struck again to leave England firmly in the hunt for the semi-finals.

Glenn said: “I was really happy to get three wickets. I’ve learned a lot in Australia about bowling wicket to wicket and not giving any width and it worked well for me tonight.

“The wicket was quite slow so it wasn’t easy to score and with the total we had set we knew a good start with the ball would make it quite hard work for their batters.

“We’ve got a big game against West Indies on Sunday, hopefully we can keep up our form from the last two games and make it through to the semi-finals.”