Triple threat: The 16 batsmen with international hundreds in all three formats 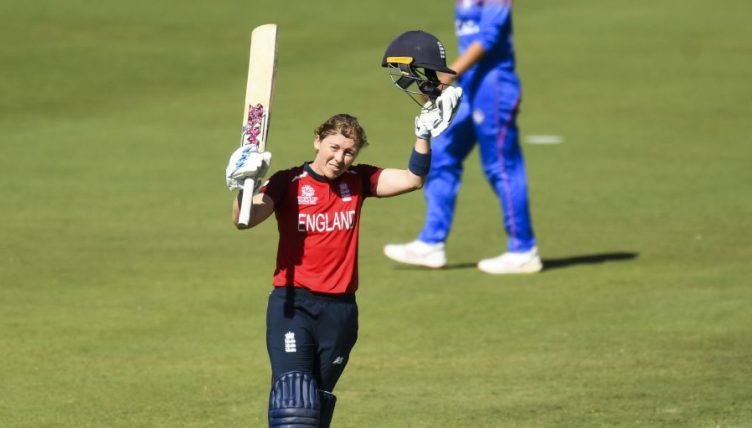 The club for players with hundreds in all three international formats has already welcomed Ireland’s Kevin O’Brien and Australia’s David Warner to its ranks in recent months and has now grown again. Belatedly, this exclusive club now features both an England player and a woman AND THEY ARE THE SAME PERSON. Mindblowing, eh.

Heather Knight has put all her male compatriots to shame – and overcome the significant hurdle of playing hardly any Tests – by blasting a match-winning 108 not out against Thailand in the T20 World Cup. Here, then, is the group of heroes the England captain joins.

Just 34 runs away from a place in Chris Gayle’s Grand Slam club due to an ODI best of ‘only’ 166. We haven’t checked everyone, but we think Virender Sehwag – two of the three ticked off and 32 runs away in the other thanks to a T20 best of 68 – is the only player closer, and he doesn’t even get into the all-format hundreds club. Nor, for that matter, does Sanath Jayasuriya, who is agonisingly only 23 runs shy of a spot but spread across ODIs (189) and T20s (88). Anyway. McCullum. Of course he’s here in this list, smashing the thing around like a maniac. But a nice, friendly one. Like Gayle, a white-ball specialist who also accidentally has a very fine record across over 100 Test matches.

The classy right-hander knocked off the first two-thirds of the task with swift, almost indecent ease at the start of his international career and then had to sit and wait six years just for T20 to be invented so he could go about completing the set. Took him a good few years, but he got there. Just. And as for Chris Gayle’s Grand Slam Club: misses out by 56 runs – nothing better than a measly 144 in ODIs for Mahela.

If he continues to make a success of his Test recall for a while, Rohit – an ODI phenom and owner of four T20I hundreds – enters the best all-format batsman in the world today discussion. Good fun. As someone who scores ODI doubles for fun and appears to have pretty much nailed Test batting – at home at least – also currently vying with Warner as the likeliest second member of CGGSC.

Yes, Watto! Keeping that big old front pad out of the way long enough to score hundreds in all formats like a big bloody legend.

Bit weird that none of his qualifying innings came against England. Always smacks England about does Tamim.

Warner scored two Test centuries before his first in ODIs, which seems a bit mad. Also mad how it’s taken a player of Warner’s ability and attributes 71 goes to get a T20 century. Anyway, he’s done it now. And on his birthday, so that’s a nice thing to happen. Ticked off two entry requirements for Grand Slam Club membership in the space of little more than a month and now just needs an ODI double-century. Piece of piss.

Knight made a perplexing decision to only play Twenty20 cricket properly once the year was also 2020. We admire that kind of literal thinking even if it is somewhat career-limiting. Having made just one half-century in 56 T20I innings between 2010 and 2019, Knight has made two further half-centuries and now, crucially for this list, a hundred in six games this year. It’s an astonishing transformation: 770 runs at 17.90 and a strike-rate of 111.75 until the end of last year; 290 runs at 58.00 and a strike-rate of 141.46 this year.

No surprise that Knight has just the one Test hundred – she has played just seven games in a decade-long career – but it’s more surprising to see just a solitary ODI hundred on Knight’s record back in 2017. As well as being the first England player to reach the landmark, Heather is also the first Knight to do so. Skittish opening batsmen turned Sky Sports question-mangler Nick pays a hefty price for foolishly being born slightly too early to play T20Is while Heather had the foresight to be born in one of only two countries that still let women play cricket and at a time that allowed her to pull off her Twenty20 in 2020 scamola. That’s the kind of foresight that separates the greats from the also-rans.