July 2019’s Ball of the Century: Ferguson to Buttler – ONE 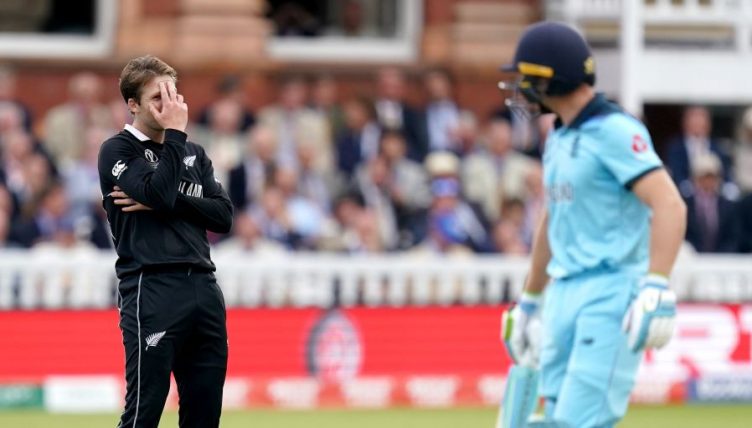 Why that particular ball, you might reasonably ask. And the answer is simple. It’s because, of the 643 deliveries in the final (318 during the New Zealand innings, 312 during the England innings plus 13 from the two Super Overs), that’s the one that the random number generator spewed out.

Ordinarily, I put more thought into my choice of the ball of the century. Balls of the century do, after all, only come around once per month so it’s important to get them right. And usually there’s a standout delivery that changed the course of a match.

But this was a match of unimaginably thin margins. So thin that the match was ultimately decided by the very sensible countback method of which team faced more dot balls.

(Well, you can, but it would require such a precise balance of twos and threes-running that it’s effectively impossible. Similar to how, in quantum physics terms, it’s technically possible for every atom in a piece of sandpaper to spontaneously turn into oxygen. That could theoretically happen. But it’s not a prospect that keeps anybody other than Cameron Bancroft up at night.)

Still, I’m not here to talk about the equivalence classes of countback methods that nobody ever dreamt would ever have to be implemented and which will almost certainly never be implemented again in our lifetime. Make the countback method for the next tied Final/tied Super Over combo be the team that hit the most threes or who has the handsomest all-rounder or, hell, the one that’s most often previously lost the World Cup because of a tied Super Over for all I care. It’s vanishingly unlikely to ever be called upon again.

Which returns me to the point I was making. That since this was a match of impossibly thin margins, the result of every single ball was absolutely vital to the course of the match. And so choosing one at random to be July’s ball of the century seems to me to be a perfectly valid approach.

Yes, there were other, more memorable, deliveries that also tilted the match in England’s favour.

There was Mitchell Santner ducking the final ball of the New Zealand innings. Silly at the time, an unfathomably ludicrous oversight fifty overs later. With England’s ill-considered public stance that they would never even countenance the possibility of ever mankading an opponent, they have become the easiest team in international cricket against which to score byes. For Santner to not even attempt one was a colossal error.

Then there was Trent Boult taking a boundary catch to dismiss Ben Stokes, only to undo the wicket by treading on the rope. All while Martin Guptill was in such close vicinity that not only could he have taken one of those collaborative catches that are all the rage with the kids these days, he was also able to adjudicate on the moment, signalling six to the umpires.

Or the very first ball of the run chase, where Jason Roy – the man most tightly correlated with England’s fortunes over the tournament – was struck on the pad from an inswinging Boult delivery only to be reprieved by the shaking head of umpire Marais Erasmus. A head shake that one can’t help but wonder might have been at least partially subconsciously influenced by Roy’s demerit point-worthy pork-choppery when erroneously given out in the semi-final.

(There’s been universal admiration for the manner in which Kane Williamson and his team have conducted themselves in… well, not ‘defeat’, exactly. But New Zealand’s stoic approach to their, uh, non-victory has justifiably won them plaudits. However, given Roy’s first-ball reprieve, it does make one wonder if the Black Caps were a side more inclined to throw the occasional tantrum at decisions that had gone against them, whether they might have received a slightly more favourable deal from the umpires on line-ball decisions. Crass to even raise the prospect, of course, but then again, I am Australian.)

But standing above all other deliveries in the World Cup final is, of course, the antepenultimate deus ex deflecta, Stokes’ remarkable ricochet overthrows to the boundary for six. A six that should have been five according to most readings of the Laws of the game. Four extra runs from one of Stokes’ infamous non-wilful deflections. One extra run from an umpiring oversight. In a tied final, that was enough to change the entire course of the World Cup, right?

Well, yes and no.

No, because even if the umpires had possessed the ice-cool presence of mind to check whether the batsmen had crossed at the time the throw came in and awarded England only five from that ball, Adil Rashid may have taken strike and hit England to victory. Or if Stokes had never deflected the ball, he might still have managed to guide England home from the last two deliveries anyway.

The same is true for the earlier slices of luck that went England’s way. Or, for that matter, any slices of luck that went New Zealand’s way and which would only have been remembered and highlighted had Kane Williamson’s men won the trophy instead. You can’t just add or subtract lucky runs and assume that nothing else would have changed. The scoreboards are in full display. The players from both sides know their targets at all times and adjust their tactics and the risks they take accordingly. (This is equally true in the Super Overs. Both sides were informed that England were ahead on dot balls faced, and they defended and attacked the final over with this in mind.)

But also yes, the entire course of the match was changed by the Stokes deflection, because the result of every ball changes the course of the match to some degree. And when the match is as bottom-clenchingly tight as this one, the final result can be tipped to one side or another by any given delivery.

Even the otherwise unremarkable final ball of the 43rd over of England’s innings, July 2019’s ball of the century.