June 2019’s Ball of the Century: Cottrell to Guptill – OUT 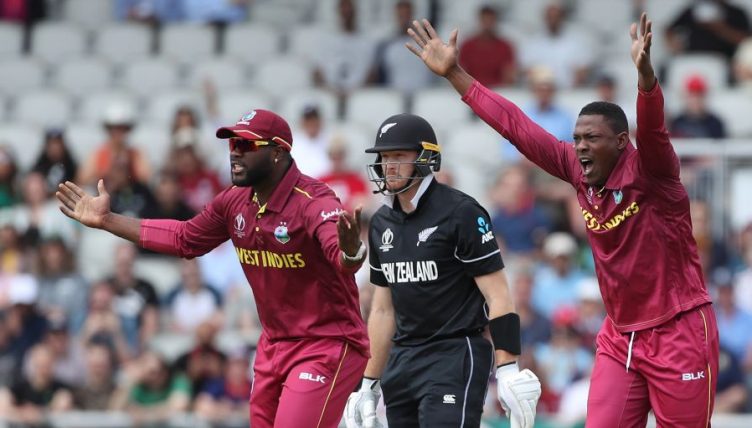 This month’s ball of the century was bowled during the 29th match of the World Cup, on June 22nd, when Sheldon Cottrell of the West Indies trapped New Zealand’s Martin Guptill LBW from the very first ball of the match.

Yes, there was a lot of chatter about the final ball of the contest when Trent Boult intercepted what would have been the match-winning six hit by, uh, whatsisname, the one who tonks the ball all the time. You know, the Stokes-smashing chap.

And sure, that’s a thrilling climax to a match, when literally the entire result comes down to the grasping hands and dainty feet of Trent Boult.

It’s certainly the kind of moment that would have those The Hundred-loving lads hooting and hollering with excitement.

But let’s look instead at a subtler moment, the type of delivery that those same metric-cricket-loving youngsters might overlook as they busily settle into their seats, still chatting with one another about hipster baseball caps and the nuances of Logic’s discography.

Yep, let’s go all the way back to the very first ball of the game.

Left-armer Cottrell came over the wicket to Guptill with a full delivery that straightened, beat the desperately plunging bat of the New Zealand opener and hit instead his back pad.

And umpire Ruchira Palliyaguruge gave it not out.

Which put West Indies captain Jason Holder in quite the pickle.

There are six possible DRS results.

Obviously, for the reviewer, 1 and 4 are great outcomes, 2 and 5 are neutral outcomes and 3 and 6 are terrible outcomes.

There are two further factors to consider in assessing DRS risks and rewards.

Firstly, the umpires are usually right. This includes, amazingly, Aleem Dar. Which means that successfully overturning a review is less likely than not overturning it.

Secondly, batsmen are rarely out. This includes, equi-amazingly, Chris Martin, who, in a career of almost a hundred international matches, faced 648 balls and was dismissed just 57 times. In other words, he survived more than 90% of the deliveries he faced. And if it’s true for Chris Martin to be more likely from any given ball to be not out than out, then it’s true for all batsmen.

Put those two factors together, and the single hardest thing to do in DRS terms is successfully overturn a not out decision. If the umpire says ‘not out’ then because batsmen are usually not out and umpires are usually right, it’s very likely indeed that the batsman will be not out.

So Jason Holder was confronted with the toughest possible DRS challenge here. But even worse for him, because it came from the very first ball of the match, that challenge also contained the greatest possible risk.

It remains a curiosity of the game that batting sides don’t just keep running from the final ball of the innings until somebody’s run out. In a rational world, there’s no downside to this. You don’t lose a run if you’re dismissed, and there’s always a possibility, no matter how slim, that the fielding side might fumble the ball. (Of course, in the somewhat less rational real world, cruelly occupied by myopic national selectors and click-hungry journalists, who may examine batting averages without taking into proper consideration one’s final ball run out dismissals, there could eventually be a downside to such selfless heroics.)

By similar logic, sides with reviews in hand should definitely use it on the final delivery, no matter what. With only one review per side per innings, the value of the review steadily decreases over time. By the time you get to the last ball of the innings, if you still have a review remaining, it’s essentially worthless. You might as well send it upstairs and hope the third umpire finds something interesting.

The batting side will have perhaps a dozen opportunities to review a decision in an innings. Say, ten wickets given out by the umpire, plus maybe a couple more given out that were overturned. Call it fifteen at most.

The other 285+ balls of a fifty over innings are all possible opportunities for the fielding captain to review a decision.

It’s an order of magnitude difference and that perhaps explains why the only other time where there’s been a wicket first ball in a World Cup ODI that’s had a review associated with it, the review was made by the batsman. That was, as we all remember, Khurram Chohan to Brendan Taylor in the Canada v Zimbabwe match of the 2011 World Cup. Taylor was trapped in front and reviewed the LBW decision, only for it to be upheld. As punishment for this moment, neither side was invited to this 2019 tournament.

(Caveat: It’s possible there have been other first balls of matches where wickets were successfully overturned or fielding sides reviewed unsuccessfully. But without a wicket in the scorecard to narrow down the search parameters, I’m not going to be able to find them. What do you want from me? To search every World Cup match’s first ball commentary like some kind of animal?)

Regardless of that parenthetical caveat, this West Indies v New Zealand game was certainly the first time that a fielding captain has successfully overturned a first ball not out decision in a World Cup.

The toughest DRS decision to succeed at, with the maximum possible downside if he failed. And Jason Holder pulled it off. Like a boss.

If any moment deserved a Cottrell salute it was this one, the ball of the century for June, 2019.