November 2019 Ball of the Century: Cummins to Rizwan – OUT 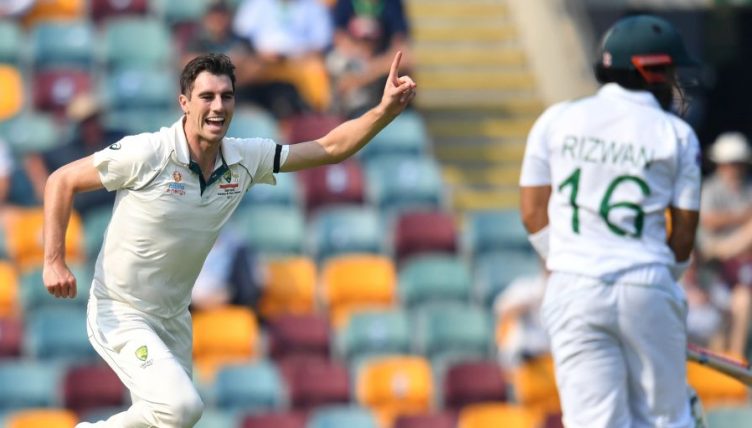 This month’s ball of the century was bowled during the first Test between Australia and Pakistan, on November 21st. Fast bowler Pat Cummins had Mohammad Rizwan caught behind, ending a 49-run partnership.

But before the Pakistan wicketkeeper was sent on his way, the umpires decided to ask their off-field counterpart to check for the possibility of a no-ball. After detailed analysis of the whereabouts of Cummins’ heel, the third umpire, to the surprise of most viewers of the replay, declared the delivery to be ‘legit af’.

It was a marginal decision. But if Cummins had overstepped, as the video footage seemed to show, he had only just done so, and that was enough for the third umpire to conjure a skerrick of doubt. And that doubt-skerrick, according to the playing conditions, was deemed to favour the bowler.

Shane Warne, Adam Gilchrist and Brett Lee have all made their minds up 👀 https://t.co/qQptPKBdsy #AUSvPAK pic.twitter.com/cLEiVssx0m

Later in the Test, Naseem Shah (who I can exclusively reveal is just sixteen years old) took what seemed to be his first wicket in Test cricket. But in this instance, David Warner received a reprieve because Naseem’s front foot had overstepped sufficiently to remove all doubt about the no ball status of the delivery.

But had all doubt been removed? Isn’t it possible, for example, that some glitch in the video system meant that instead of viewing the wicket-taking delivery, the third umpire was instead looking at an earlier no ball, and that the ball that captured Warner’s wicket was, in fact, legal? Or maybe an optical illusion meant that the crease only seemed to be behind Naseem’s foot, when it was actually far in front? Or perhaps unrepentant bad boy Cameron Bancroft had hacked his way into the system and digitally altered the replay footage as part of a zany caper?

Sure, none of these scenarios were likely. But they’re all theoretically possible. Which means, just as in the Cummins case, there is no way the third umpire could have been one hundred percent certain that Naseem had overstepped. Yes, they were different magnitudes of doubt, but doubt still existed in both cases, and Naseem should therefore also have received the benefit of that doubt, and been awarded Warner’s wicket.

Wait a second, you’re probably saying, assuming you’re the kind of person who talks to web sites. By this logic, no umpiring decision is certain. If one insists upon being that pedantic about the nature of doubt then we will be condemned to play cricket in eternal, grey-shaded incertitude.

To which I say, precisely. For far too long, cricket has been a game of binary options. Batsmen are in or out. Bowlers are bowling no balls or not. Shaun Marsh is part of the Australian XI or not.

But we don’t live in such a black and white world. Nothing in reality is that clear-cut. And cricket needs to accept this and adjust accordingly.

There will be resistance to change. There always is. Certain people will inevitably urge a ‘common sense’ approach, arguing that the amount of doubt about the Cummins ‘no ball’ was so much greater than the doubt about Naseem’s that it’s perfectly reasonable to declare the former a legal delivery and the latter an illegal one.

Perhaps. But where’s the cut-off? If the third umpire thought there was, say, a 5% chance Cummins had part of his heel behind the line and only a 0.1% chance Naseem did, then we know his ‘benefit of the doubt’ tolerance is somewhere between those two likelihoods. (Obviously, any third umpire other than Richard Kettleborough wouldn’t

actually quantify these numbers in this way. But the human third umpires must still be making something resembling these calculations, even if just on a subconscious level.)

And no matter where the umpire’s implicit doubt cut-off is, there will always be cases so close to their tolerance limits that the tiniest variations will lead to vastly different outcomes. For example, if the third umpire believes that a 2.5% level of doubt is enough, and one bowler oversteps by an amount that generates 2.50001% doubt and another by one that corresponds to 2.49999% doubt, then that miniscule difference will lead to very different outcomes, as the umpire rounds to the required binary decision of no ball or otherwise.

We see this all the time already in DRS, with ball-tracking. Don’t let the trichotomy of ‘out/umpire’s call/not out’ distract you. At the boundary of each of those regions there are cases where a millimetre’s difference in the projected path of the ball will see the maximum possible divergence of one batsman being given out and another not.

But what’s the alternative? If we have to decide whether a batsman’s out or not, then there will always be edge cases, and, hence, the prospect of somebody falling unluckily on the wrong side of those edges.

The solution to this problem, therefore, is to eliminate edge cases and implement probabilistic cricket instead. That is, rather than batsmen being either in or out, they would move throughout their innings from 0% out to 100% out, and only leave the crease once that upper limit was reached.

Caught behind from a delivery from Pat Cummins that’s a no ball with 95% certainty? Stick around. You’re only 5% out. Rapped on the pads by a ball that’s 63% likely to go on to hit the stumps? Now you’re up to 68% out. Caught by a diving Marnus Labuschagne where foreshortening means we’re 50/50 on whether the ball carried? Now you’re 118% out, and must leave the crease.

Of course, to prevent batsmen from taking advantage of these part-lives and racking up massive totals while 99% out, all runs made would also have to be adjusted proportionally. For example, if you’re 75% out and hit a four, then only 25% of those runs count. This opens up all kinds of tactical opportunities. Rotating the strike becomes much more strategic. There is, after all, little point in keeping a 95%-out batsman on strike and only accumulating one run on the scorecard for every 20 struck.

And speaking of scorecards, don’t tell me you wouldn’t want to see one that reads ‘243.81 for 4.69’ (or ‘4.69 for 243.81’ if you’re Australian)? Extra decimal places in the runs and wickets column serve to demonstrate the paradoxical truism to which November’s Ball of the Century and Pat Cummins’ associated doubt-riddled heel have so clearly led us.

Namely, that by embracing the uncertainty of cricket we counter-intuitively make it more accurate.