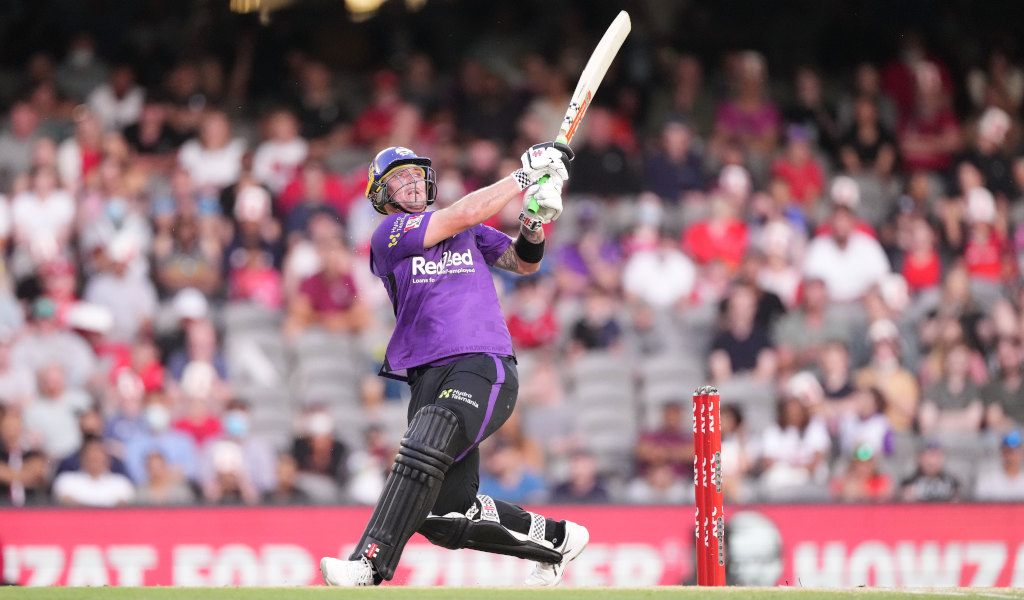 Hobart Hurricanes batter Ben McDermott has been named the BBL 11 Player of the Tournament after a record-breaking season opening the batting.

McDermott became the first player in BBL history to notch centuries in consecutive matches He plundered 110 not out against the Adelaide Strikers on December 27 before backing that up 48 hours later with 127 against the Melbourne Renegades.

The 27-year-old also became the first player to score three career BBL centuries, narrowly missing out on another when scoring 93 against the Brisbane Heat on January 8.

The Hurricanes opener ended  BBL 11 with 577 runs – the fourth-highest single season tally in BBL history – at 48.08 apiece and a strike rate of 153.86. He currently sits 90 runs clear of Adelaide’s Matt Short in the BKT Golden Bat standings, with Short due to line up in The Challenger at the SCG on Wednesday night.

McDermott’s prolific season saw him break into the all-time top 10 run-scorer’s list since the competition’s inception, with his cumulative tally now sitting at 2139 runs from 74 games. He also became the fourth player to hit 100 BBL sixes during this season’s final home and away game against the Melbourne Stars.

His contribution to the Hurricanes’ Finals-bound campaign also stretched into the field, taking the wicket keeping gloves on six occasions he returned four catches and one stumping. He also claimed another five outfield catches.

The BBL 11 Player of the Tournament is voted on by match officials at the 56 home and away matches throughout the season. McDermott tallied 25 votes to finish three clear of Melbourne Stars pair Joe Clarke and Glenn Maxwell, who tied for second place with 22 votes each.

“After showing moments of brilliance throughout his BBL career, it was fantastic to see Ben McDermott construct a record-breaking season for the Hurricanes,” BBL Player Acquisition and Cricket Consultant Trent Woodhill said.

“His move back to the top of the order was a masterstroke and he made the most of his opportunity against the new ball. His power and timing was a delight to watch.

“It is also pleasing to see a combination of big names and breakout stars in the top 10 of voting. While Mitchell Marsh, Glenn Maxwell and Aaron Finch confirmed their standing as top T20 players, the likes of Matt Short, Tom Rogers and Kurtis Patterson also enjoyed career-best BBL seasons.

“Congratulations to all players who featured and thanks to our match officials for their work in identifying the Player of the Tournament.”