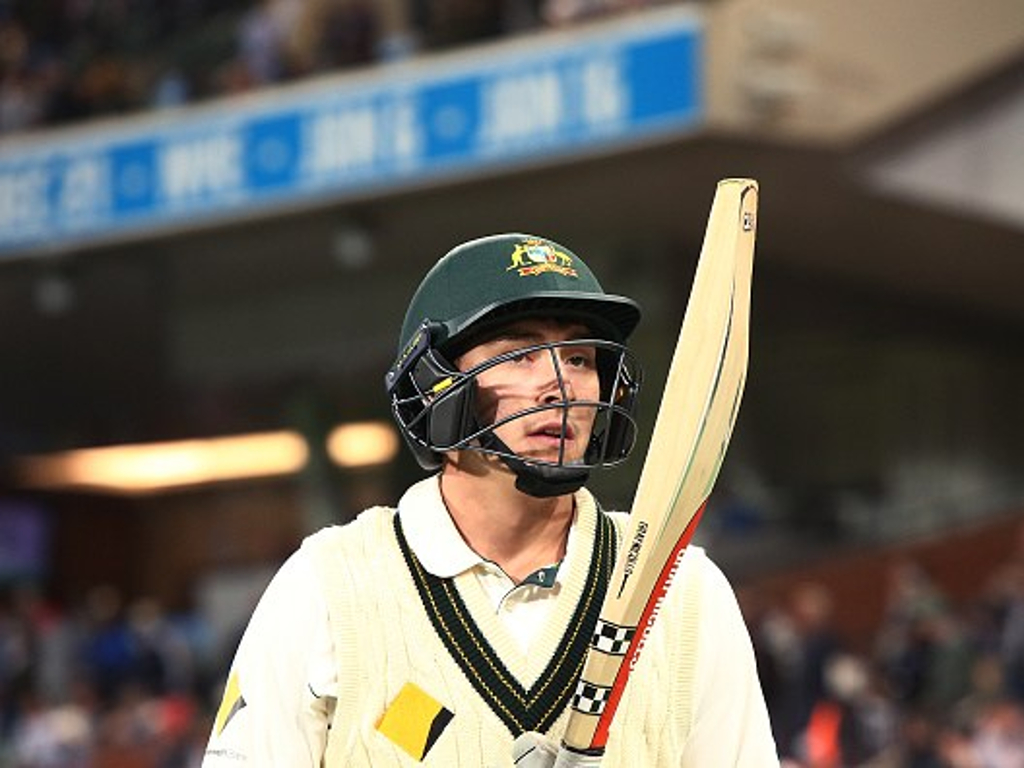 Hello and welcome back inside the Press Tent where we have been scouring the interwebs for the best cricket coverage we could find.

After last week’s #MintGate special, where finding things to write about was the Press Tent equivalent of shooting proverbial fish in a proverbial barrel, this week we have had to earn our corn by doing some actual work. This is a disturbing development.

Star man for the Advertiser, but not for Channel 9

It had been a tough two weeks for Australian cricket heading into the day/night Test in Adelaide. Having lost five matches in a row, lost a home series to South Africa, and being on the brink of home whitewash for the first time in their history, things were pretty bleak.

Five changes were made to the playing XI, one of those being the addition of Yorkshire born opening batsman, Matt Renshaw. Whenever a Test nation changes almost half their team mid-series you know they are losing, and they have some serious questions to ask their selectors. Either it was wrong before, or they have panicked and got it wrong now. Neither scenario is a good look.

So the Australian press were looking for find some positives. The one that the Adelaide Advertiser found was that Renshaw finished on 8 not out over night after Faf du Plessis declared nine wickets in a “f$ck you declaration” designed to prevent David Warner from opening because he had left the field injured.

“Not even the last-minute chaos of having David Warner expelled as his opening partner could fluster iron-willed debutant Matt Renshaw in Adelaide last night,” the Advertiser proclaimed on their back page. 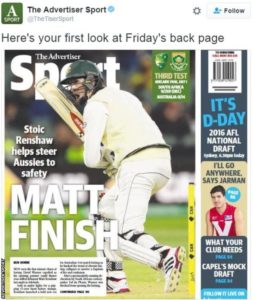 When you are giving back page spreads to a lad who survived 12 overs to score 8 runs you know it has been a tough week. Oh, Renshaw got out 10 after 21 balls of day two.

That stoic resistance of the first day may have been welcomed by the Advertiser, but as Renshaw played an innings of 34 not out to see his side home to a much needed victory the boys in the Channel 9 commentary box weren’t happy. Renshaw was not showing! positive! intent!

They seemed to have forgotten that the same positive intent they wanted to see from the young debutant had been what contributed to Australia getting shot out for 85 in the previous Test in Hobart. Perhaps the Channel 9 banter boys were worried about missing an early tee-time on the golf course if Renshaw took the match into a fifth day.

The ground-staff at the Punjab Cricket Association ground in Mohali are not happy with the English press corps. They arrived at the stadium and decided they wanted to have a look at the pitch. This isn’t uncommon, rights holders tend to have pitch access for doing exactly this, or for chatting to players at the toss.

But that is not the way things are done in Mohali. Apparently, the head curator, Daljit Singh, doesn’t allow people to look at the pitch before the toss. Either the English media didn’t listen or they weren’t told. The Hindustan Times were not happy about this breach of protocol.

“England nearly pulled off an upset in Rajkot on what was termed a ‘fair’ pitch, but were found wanting on the sluggish surface in Visakhapatnam. This did not go down well with the visiting media contingent, and with the Faf du Plessis ball-tampering controversy making the headlines, images of India skipper Virat Kohli rubbing ‘sweetened’ saliva to polish the ball gave them the ammo to hit back at the hosts.

“But if ‘fair play’ was the peg, their behaviour at the Punjab Cricket Association (PCA) ground on Thursday belied that. Even as their team practiced at the nets, English reporters and television crew strolled on to the pitch and started checking out the surface for the third Test, which gets underway on Saturday, much to the annoyance of the ground staff.”

It seems that some members of the media were tapping the pitch and checking to see how dry it was. This was not appreciated. A game of football between Nasser Hussain and Mike Atherton on the corner of the outfield didn’t help calm the situation.

Let’s have a nice, but bitter sweet, story to finish on. Haseeb Hameed scored 59 not out with a broken hand for England against India. Already anointed as the saviour of England cricket by our over-enthusiastic English chums, even us cynical South Africans have to admit the kid looks a bit special.

Hameed needs to return home to have a plate put in his hand to fix the damage done by a ball from Mohammad Shami in the first innings in Mohali, but before he left he got to chat with Virat Kohli. Even before the tour got underway Hameed had spoken of his admiration for India’s captain.

At the end of the match a wide-eyed Hameed with a strapped up hand was pictured chatting with Kohli. It is one of those pictures that just makes you feel happy, and makes you question you spending your time writing overly-cynical columns about press coverage of cricket. 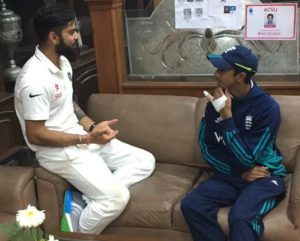 The only down side was the amount of missed open goals from those that tried to caption this picture amongst the cricketing Twitterati. They had a great chance to make this a meme we could all enjoy and nearly everyone failed.

Apart from Charlie Reynolds of the Independent, he nailed it with his tweet.

“All the best cricketers try and learn from others, so good to see Virat Kohli picking up some tips on how to bat in England…”