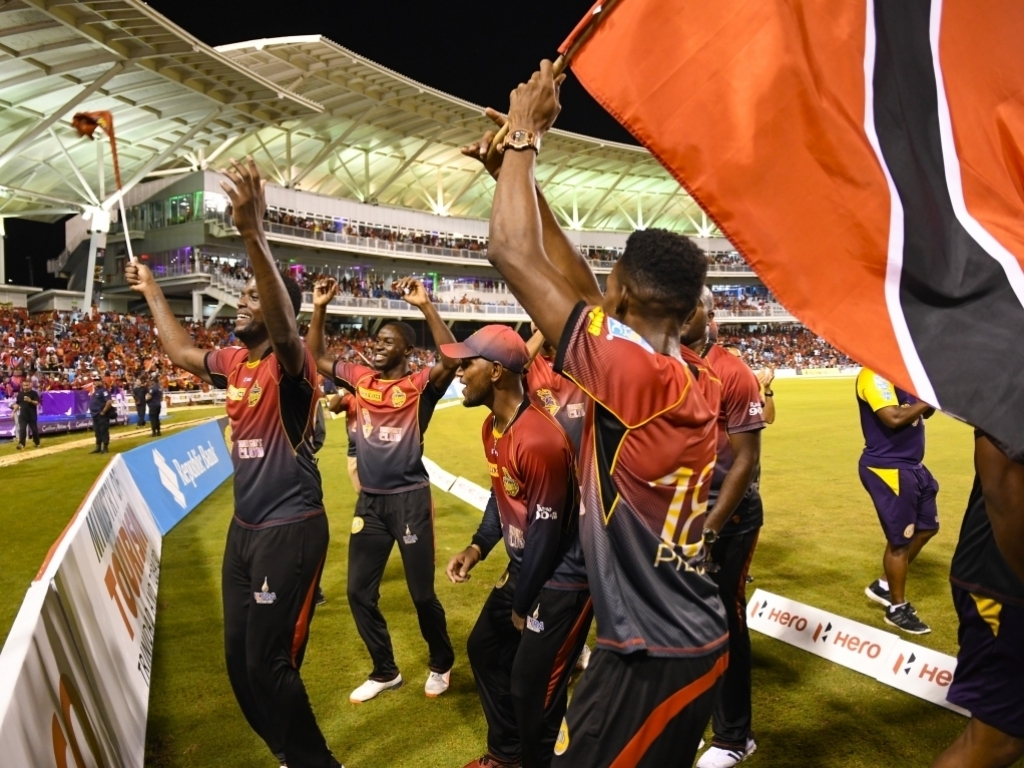 A stunning late surge from the Trinbago Knight Riders turned a helter-skelter match on its head right at the death to seal their second Caribbean Premier League (CPL) title and deny St Kitts & Nevis Patriots in a thrilling final.

It was then that Cooper exploded into life, launching a six over extra cover to ignite the contest once more.

A dramatic penultimate over bowled by Ben Hilfenhaus begun with two wides in the first three balls before a waist high no-ball was carved over cover for another six from Cooper.

The ensuing free hit was hit for four through backward point and so too the ball after that. Two balls later Ramdin scampered a single to seal the win with an over remaining.

The Knight Riders run chase was derailed in the second over when they lost two wickets in two balls to the bowling of Sheldon Cottrell. First Sunil Narine’s poor form continued when he top edged a pull shot that was caught by the bowler.

The very next ball the promoted Dwayne Bravo was brilliantly bowled by an in-swinging yorker.

Colin Munro breathed life into the run chase in the fifth over by hitting Mohammad Nabi for three straight sixes with mid-on and mid-off in the circle. The following over he tried the same thing to Mohammad Hafeez but with long-on back he couldn’t clear him and was caught.

When Darren Bravo was trapped lbw by a delivery from Hafeez that skidded on what begun as a relatively straightforward run chase had been transformed with the Knight Riders 53 for 4 after 8.2 overs.

A brief partnership of 14 between Hamza Tariq and Ramdin stabilised the innings but Tariq soon fell for a torturous 16 off 22 balls when a leading edge off Tabraiz Shamsi was brilliantly caught by Brandon King diving forward at cover.

After Dan Christian was run out and Javon Searles caught the Knight Riders were seven down, but their demise brought Cooper – the eventual hero – to the crease.

Earlier in the evening after being put into bat by the Knight Riders the Patriots innings saw a familiar rivalry resume between Chris Gayle and Ronsford Beaton.

Gayle survived a testing first over but fell victim to the first ball of the second from Searles, driving uppishly to Yasir Shah at backward point for just one.

The pressure of a tight start from the Knight Riders told in the fourth over when Mohammad Hafeez looked to hit the first boundary of the innings but picked out Dan Christian at mid off leaving the Patriots 11 for 2.

Boundaries from Lewis and King gave the Patriots a fillip but they only managed 28 for 2 off the Powerplay.

A relaxation of the field restrictions brought no let up in the pressure from the Knight Riders who continued to keep things tight. In the eighth over Narine made the key breakthrough when he trapped Lewis lbw for just 16 off 16 balls.

Things soon got worse for the Patriots when they lost King to the first ball of the tenth over: trapped lbw by Cooper and when Devon Thomas cut Cooper straight to Yasir at backward point the Patriots were 65 for 5.

With Narine bowling exceptionally from one end the Patriots couldn’t get away in the late middle overs. Narine finished with stunning figures of 1 for 8 and after 16 overs the Patriots were just 79 for 5.

Fortunately they had Carlos Brathwaite and Mohammad Nabi waiting in the wings. Seven boundaries in the final four overs of the innings lifted them to 135 for 6 with Brathwaite finishing 30 not out off 25 balls and Nabi  18 not out off 5 balls.

The Knight Riders did not bowl badly at the death but Brathwaite and Nabi hit brilliantly, muscling full balls for boundaries on both sides of the ground.

It was spectacular batting but less than two hours later it was upstaged by Cooper’s pyrotechnics.