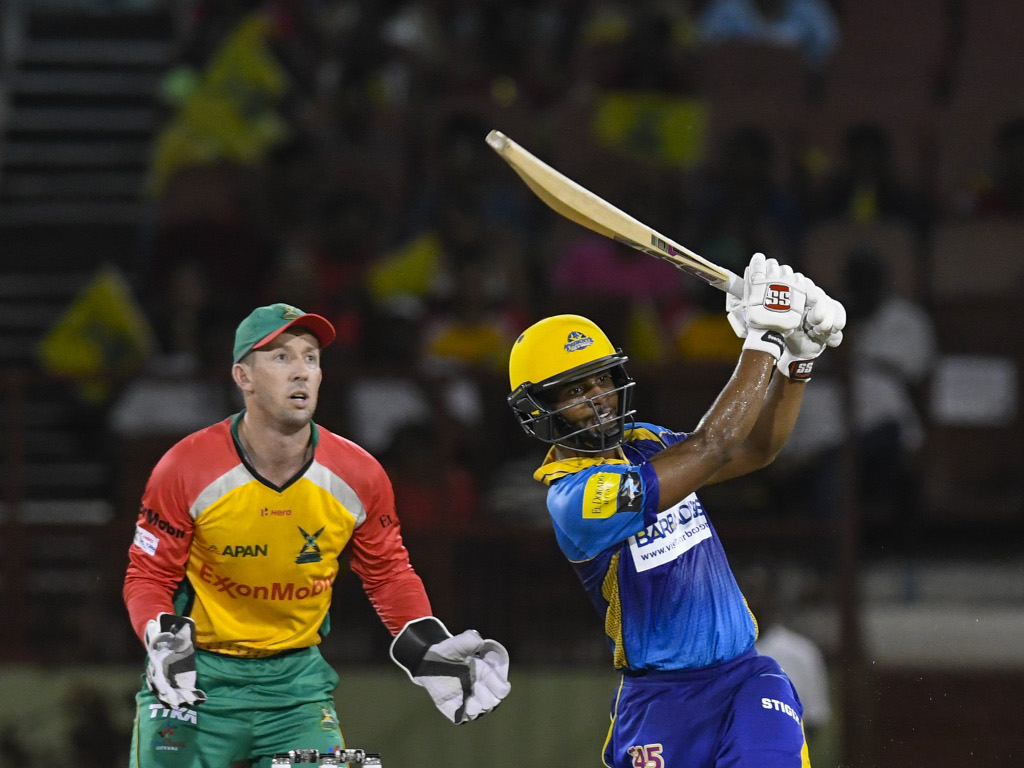 After seeing both openers dismissed early, Hope plundered 88 from just 45 balls and shared a 105-run partnership with Australia superstar Steve Smith (41), before wicket-keeper Nicholas Pooran smashed three sixes in an unbeaten 45 from 27 to lift the Tridents to 185/4 from their 20 overs. It was a total that always looked beyond the Amazon Warriors, who end the first home leg of their CPL campaign on a losing note after victories over St Kitts & Nevis Patriots and St Lucia Stars.

After Chadwick Walton fell to what looked a harsh lbw decision against Jason Holder, whose back-of-a-length delivery looked set to clear the bails, Shimron Hetmyer briefly threatened something special as he raced to 22 from eight balls with two sixes and two fours. 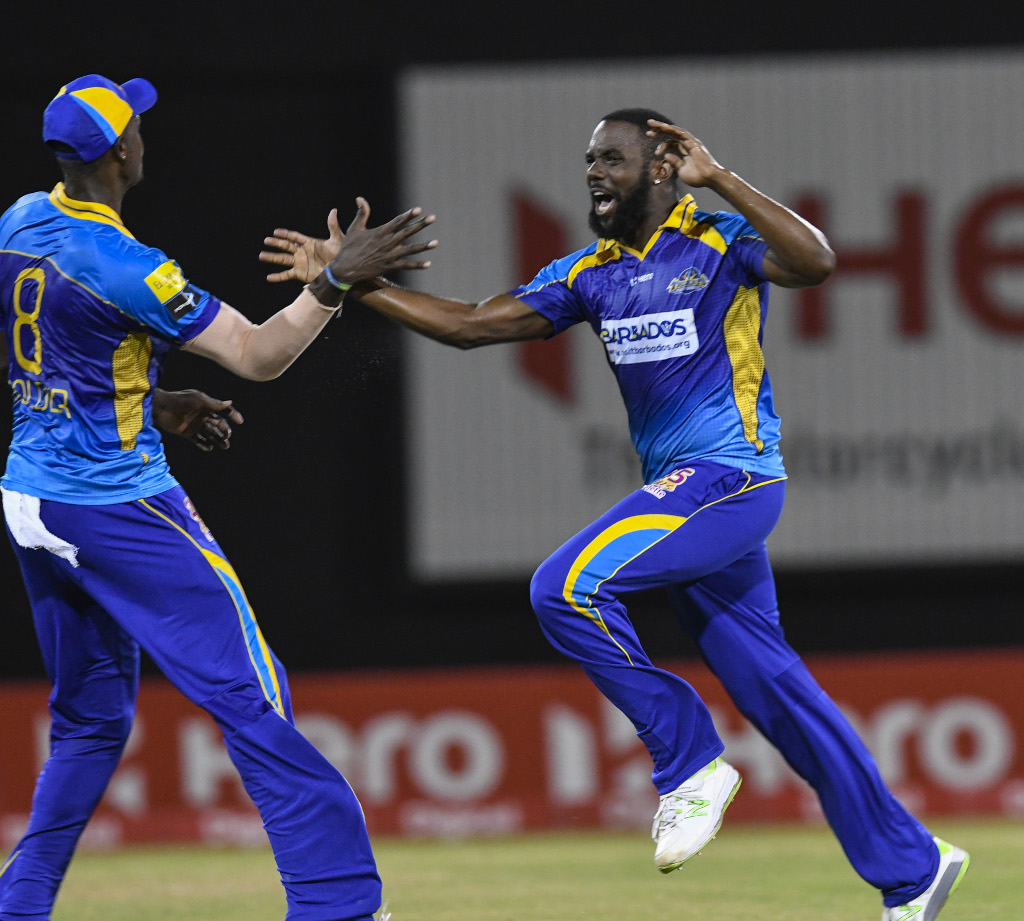 But he fell into a Tridents trap when he slapped Reifer to Martin Guptill at wide long-on the ball after Luke Ronchi had skied a simple catch to Ashley Nurse. At 40/3 with such key men dismissed, it was always going to be a long road back.

Sherfane Rutherford and Shoaib Malik steadied the ship, but it was slow going with 44 balls eaten up to take the partnership to 50. The acceleration did eventually come from Shoaib, but there was by now just too much for the Amazon Warriors to do.

Shoaib did pass a significant landmark during his 30-ball 38, becoming only the fourth man in history to reach 8000 career T20 runs and sit alongside short-form legends Chris Gayle, Brendon McCullum and Kieron Pollard. 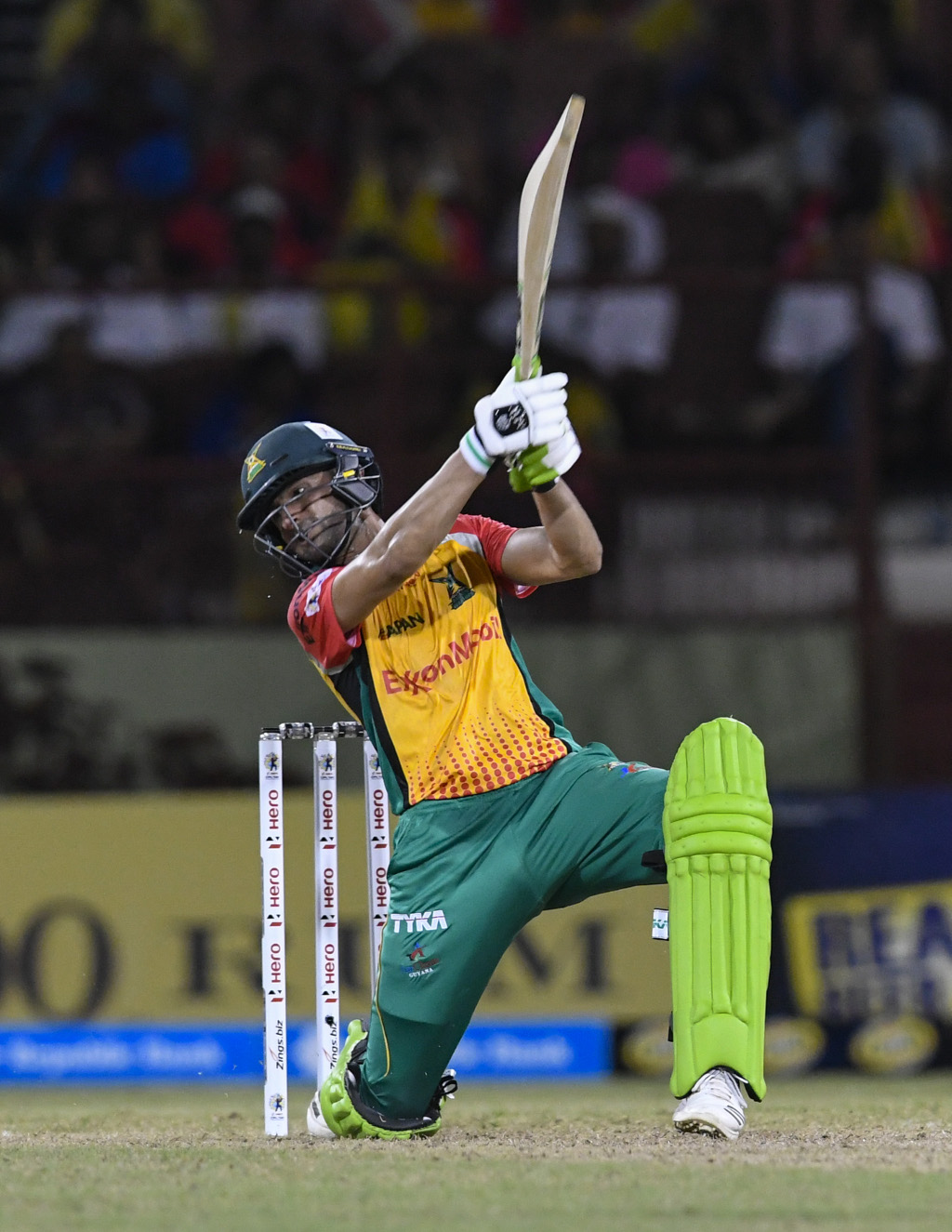 The Pakistan veteran launched Nurse for a huge maximum but was bowled off the bottom edge next ball to leave the inexperienced Rutherford in charge of an increasingly daunting chase.

With big hits needed, Rutherford was guilty of losing his shape and trying to hit the ball too hard. His strike-rate dipped below 100 as Holder gave up just four runs from his final over to leave the Amazon Warriors needing an unlikely 53 from the last three overs.

Rutherford did manage to clear the ropes in the 18th over to reduce the target to 39 from the last 12 balls, but Reifer returned to settle matters once and for all with three wickets in four balls over to end with remarkable figures of 5/20. Chris Green was caught at cover before Jason Mohammed holed out to deep point and a frustrated Rutherford gloved a slower ball through to Pooran. 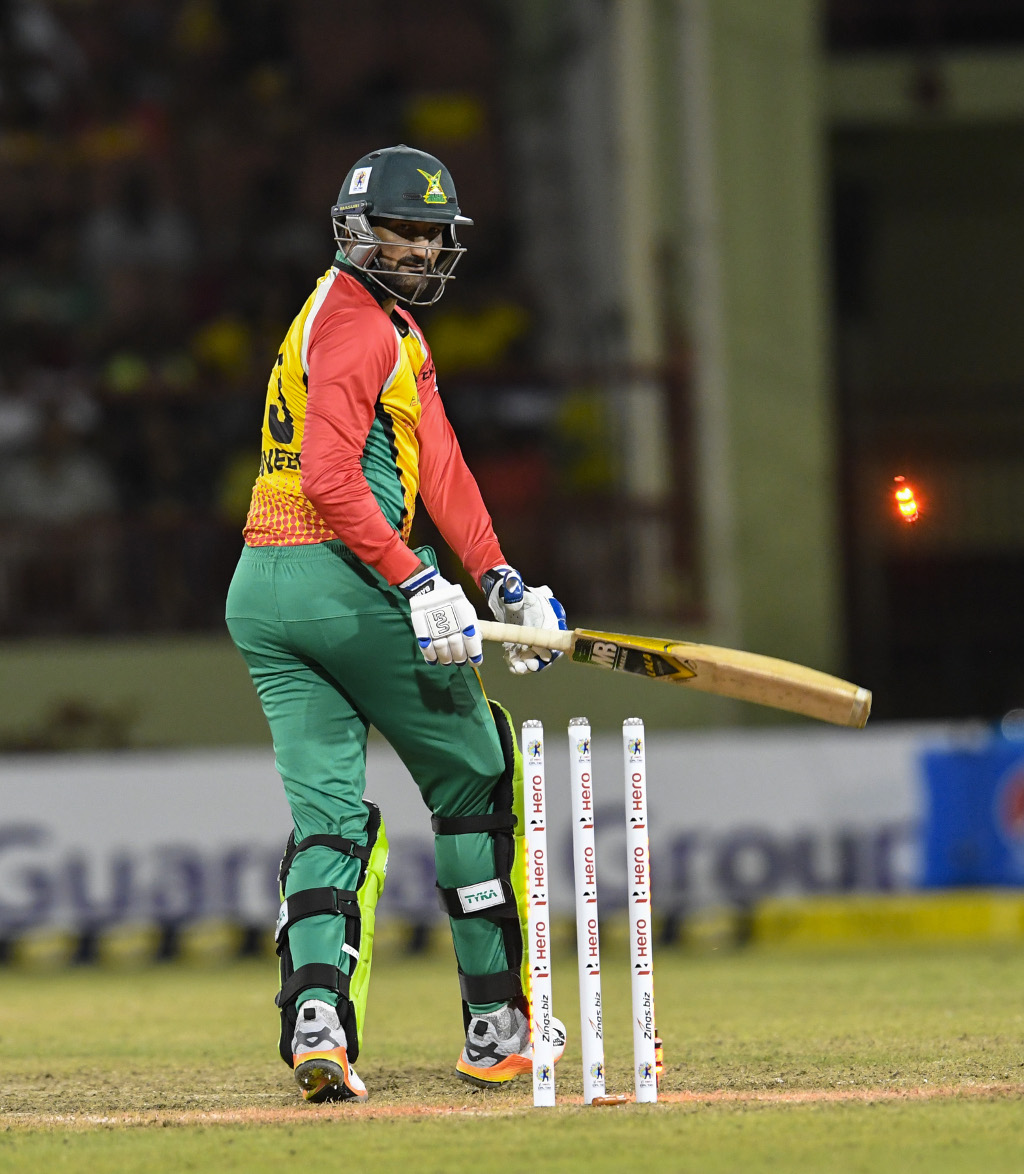 Wahab completed the formalities, knocking back Sohail Tanvir’s off stump in the final over as the Amazon Warriors came up well short.

It was a comfortable opening win for the Tridents, but they could hardly have made a worse start.

Martin Guptill arrived in the CPL on the back of a 35-ball hundred for Worcestershire against Northants in England’s T20 Blast but departed without scoring in the first over of the night here as he drilled Sohail Tanvir to mid-off where Rayad Emrit took a ripping one-handed catch. 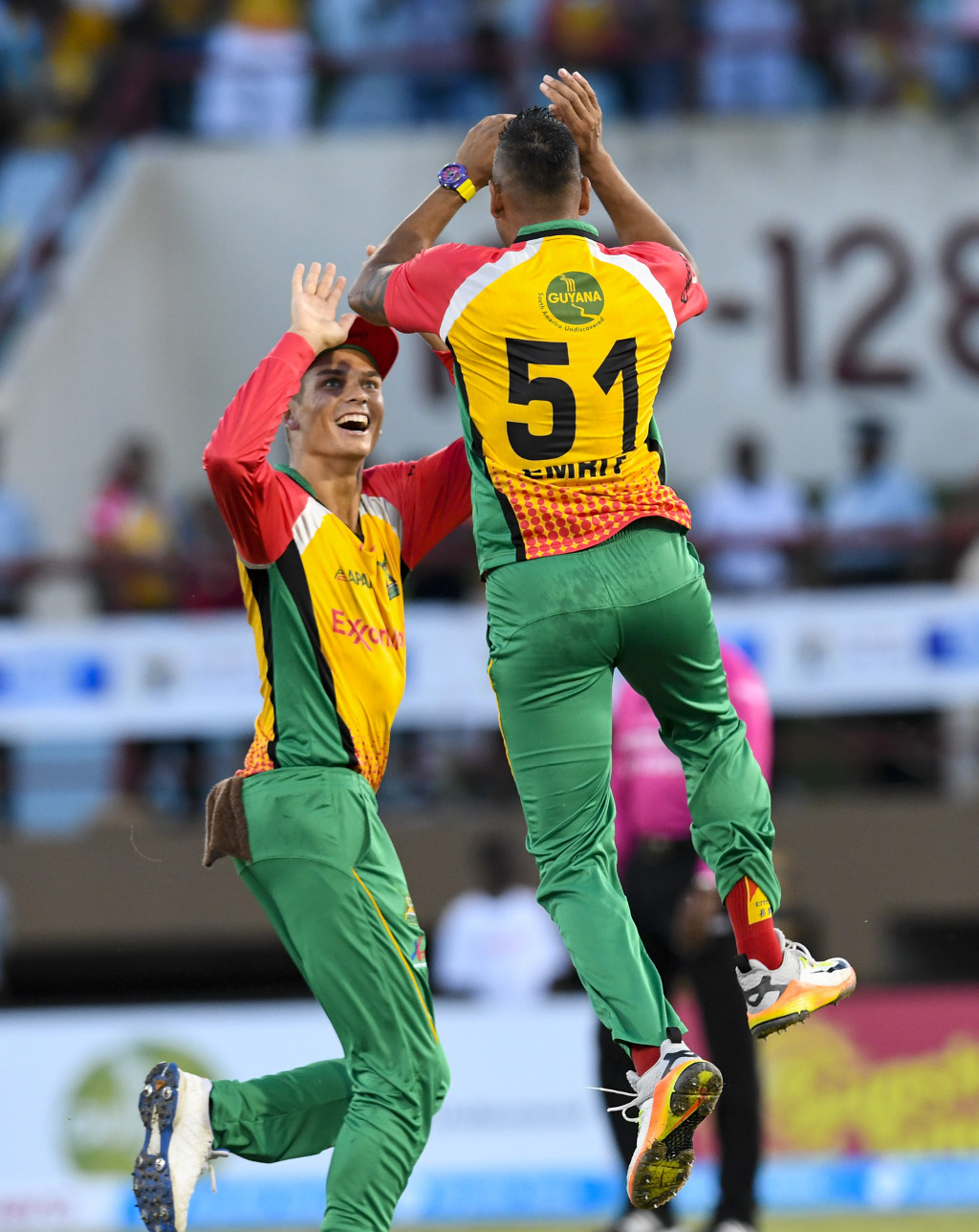 And Dwayne Smith fell in the next over as he picked out Shoaib at cover off Aussie off-spinner Chris Green.

That brought Steve Smith to the crease, and he and Hope set about turning the innings around. Hope was the aggressor, taking a four and a big six over mid-off from the final over of the Power Play.

Smith got himself going with a couple of boundaries in the ninth, bowled by Emrit, first walking across his stumps to hit to leg in trademark style before lacing a cut shot that bounced back off the boards at point. 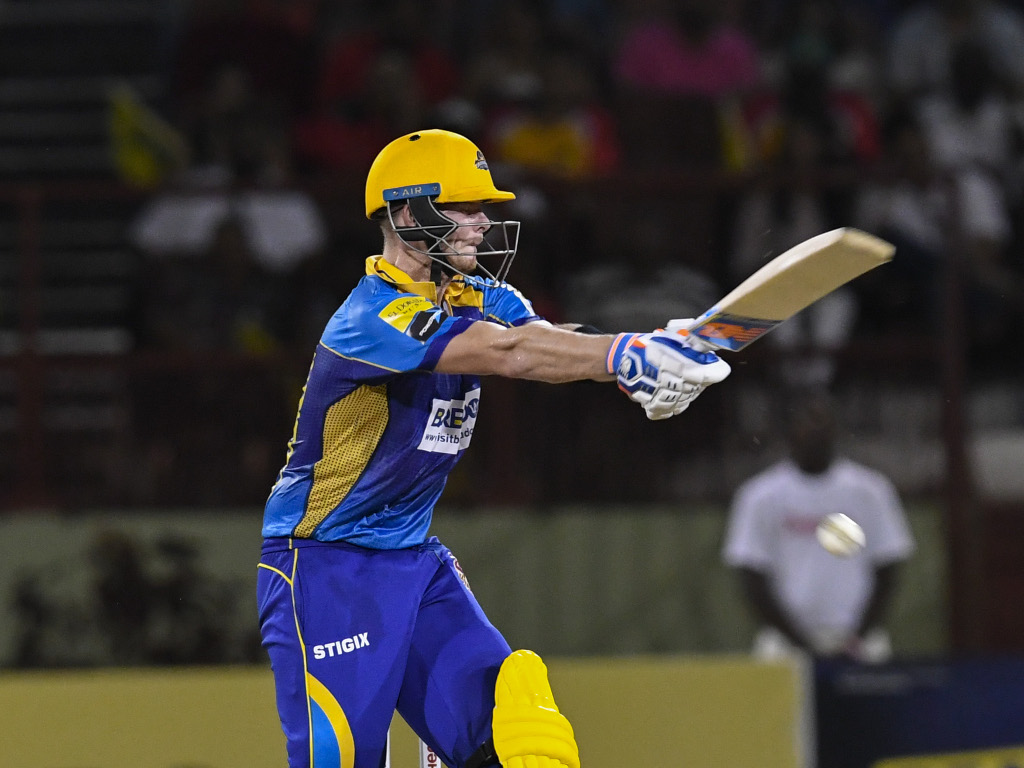 The innings really sparked to life, though, at the end of the 11th and start of the 12th. First Hope launched the otherwise-unhittable Tahir for two successive Maximums to finish over 11 before Smith picked off Keemo Paul for back-to-back fours through the off-side to start the next.

Hope went through to a half-century – his first in T20 cricket – from 30 balls with three fours and three sixes, and the loss of Smith plumb lbw to Tahir for 41 didn’t slow him down.

In an innings that belied his T20 inexperience in just his 10th match, Hope continued to play strong but controlled shots, particularly down the ground. 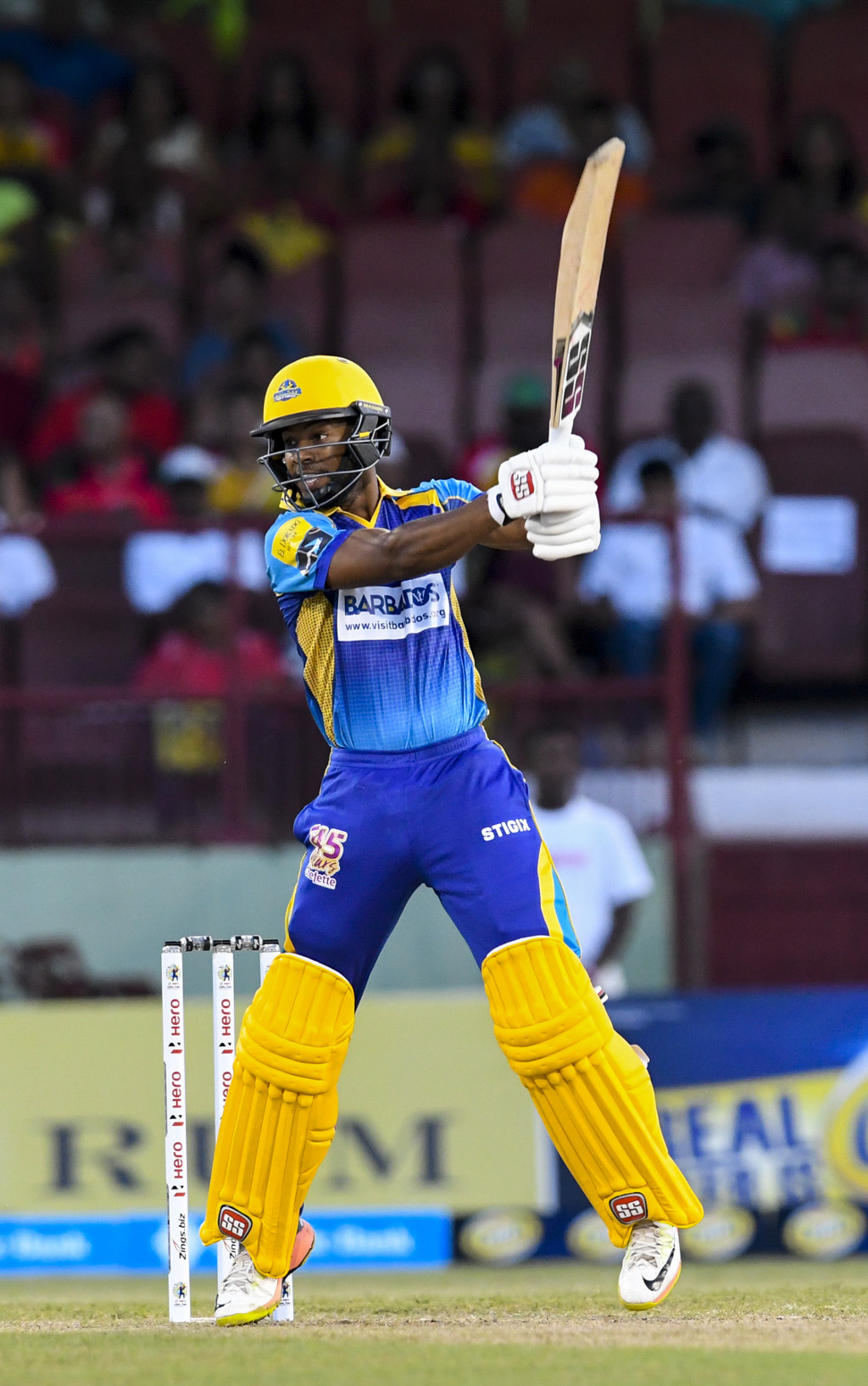 The 150 came up with his sixth maximum of the night, smoked over wide long-off and forcing the Carib Girls to take cover.

Spinners Tahir and Green gave Guyana some control, both men returning figures of 1/24 from their four overs, but the seamers all went the distance with Tanvir, Emrit and Paul all recording economy rates in double figures from their four-over spells.

Hope fell a dozen short of a hundred when he holed out to Hetmyer off Paul, but Pooran picked up the baton and propelled the Tridents beyond 180 with three sixes in the final over.