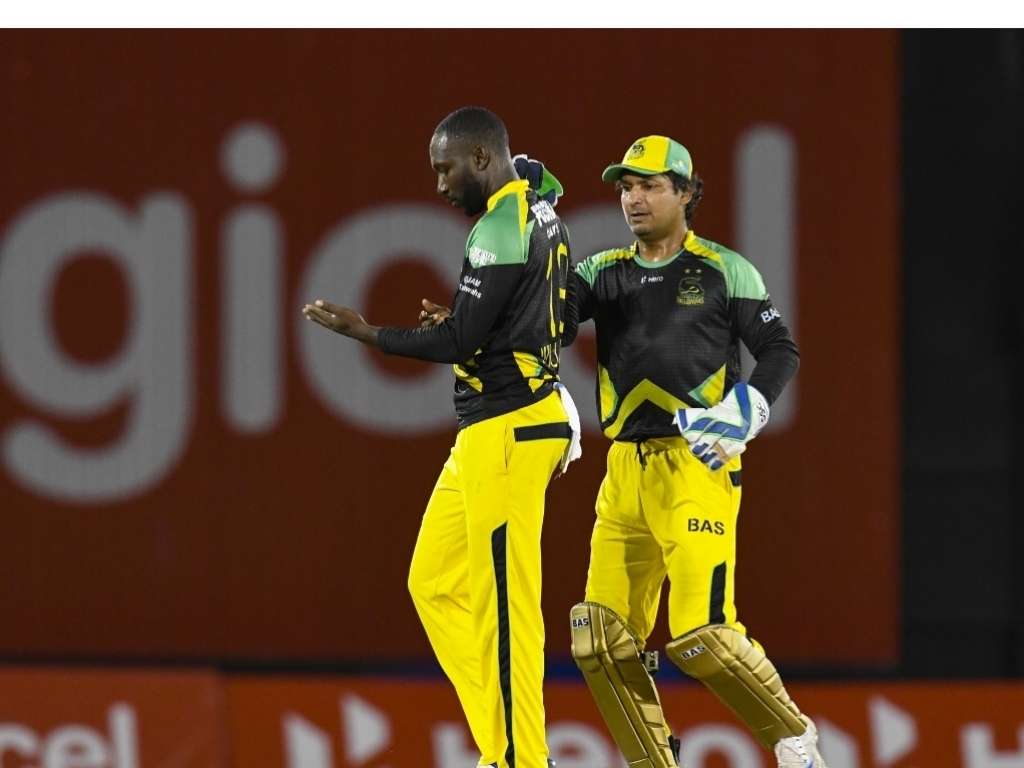 The Jamaica Tallawahs edged home against Guyana Amazon Warriors in an engrossing match on a challenging pitch in Providence Stadium in Match 15 of the 2017 CPL.

A thrilling final over saw Kesrick Williams defend three runs off the last ball as Roshon Primus skied a ball high into the sky and was caught by the substitute fielder Jon-Russ Jaggesar giving the Tallawahs a two run victory.

Chasing 129 to win on a slow pitch the Amazon Warriors were in control of the chase for much of its course but never took command. Requiring eight from the last over Jason Mohammad was dropped in spectacular fashion off the third ball when Rovman Powell juggled a boundary catch and threw it to Lendl Simmons who could not hang on, allowing the batsmen to run three. The very next ball Babar Azam was caught at long off before a single off the following delivery meant three was required from the last.

A productive eighth over, fuelled by good running and a precious four from Walton lifted the Amazon Warriors up with the rate. After Martin Guptill was dropped twice in six balls he expertly cut his first boundary off the spin of Garey Mathurin to take Amazon Warriors to 61 for 0 at the halfway stage.

Within three overs of the second half of the innings Walton had been deceived by a slower ball from Kesrick Williams and Guptill had been bowled playing across the line against Garey Mathurin. The demise of both openers brought two new batsmen to the crease with 50 required off 44 balls.

For 27 balls of the partnership between Jason Mohammad and Babar Azam the Amazon Warriors remained relatively in control of the run-chase without playing a shot in anger. However, the equation had shifted slightly to 26 being needed off 18, requiring the Amazon Warriors to find the boundary. In the last three overs they only managed to do that once and despite some indifferent fielding gifting additional runs they never got on top of the rate.

In the first innings the Tallawahs battled hard to reach 128 for 7. Within a few balls of the match the nature of the pitch became clear. Historically it has been slow and low, producing an average first innings score of just 125 – the lowest of all CPL venues, and this pitch was clearly no different. It took the Tallawahs ten balls to score their first runs off the bat with the pitch offering nothing to the batsmen and forcing them to generate their own pace.

Although Simmons managed to get the first three boundaries of the innings away he struggled other than those shots and faced 15 dot balls before being bowled by a Rashid Khan googly for 20. Glenn Phillips hit his first boundary two balls later to take the Tallawahs to 35 for 1 at the end of the Powerplay.

By taking pace off the ball spin proved harder to score against than pace and for eight consecutive overs after the end of the Powerplay the Amazon Warriors bowled their three spinners: Rashid, Veerasammy Permaul and Steven Jacobs. In that period the Tallawahs lost two wickets, both to Jacobs: Andre McCarthy, bowled looking to slog sweep and Kumar Sangakkara bowled driving outside off stump.

While his partners were dismissed, at the other end Phillips battled hard to survive and hitting just two more fours before the end of the 14th over, but his continued presence provided the innings with stability.

The return of pace in the 15th over brought a change in approach with Phillips striking a leg side six before edging a four. Rovman Powell was keen to capitalise on the change of pace but was well caught in the deep by Rashid to leave the Tallawahs 86 for 4 off 15 overs.

Some powerful hitting from Jonathan Foo, who scored a valuable 20 off 12 balls, and Phillips who finished with a well-earned 51 off 47 helped lift the Tallwahs to 128 – a total that ultimately proved fractionally too many for the Amazon Warriors.