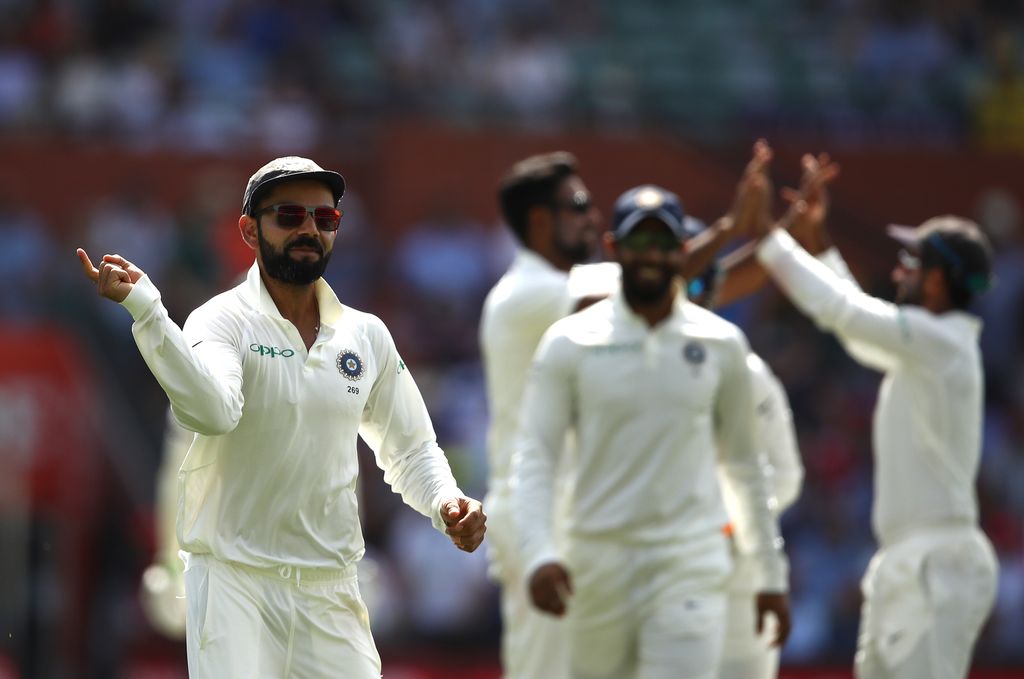 Australia were stuttering in a record run chase at the Adelaide Oval as India eye a chance to go one-nim up in the four-match Test series Down Under.

The home side were 104/4 at stumps pon day 4, still needing another 219 runs tto reach their 232-run target with Shanu Marsh still at crease on 31 and Travis Head with him on 11.

The hoem side’s hopes on he final day will rest on the two batsman stil in teh middle as catain and wicketkeeper Tim Paine is the last remaining batsman still to come.

A late collapse got the crowd on their feet and gave Australia a flicker of hope, with India’s last four wickets falling for just four runs.

Australia spinner Nathan Lyon was the pick of the bowlers, taking 6-122 off 42 overs. It was his 13th five-wicket haul in Test cricket while fast bowler Mitchell Starc took 3-40.

The Aussies need to make history to win. The only successful fourth innings Test run chase of more than 300 at Adelaide came in 1902, when the hosts made 315 to beat England.

Opener Aaron Finch – who survived being given out lbw second ball when a review showed Ishant Sharma had overstepped the crease – made just 11 in his second failure of the match.

Debutant Marcus Harris matched his first innings score of 26, hitting three crunching boundaries before he was caught by Rishabh Pant off Mohammed Shami, getting an edge on an attempted cut shot.

Australia desperately needed the experienced Usman Khawaja to stick around but he decided to run down the pitch to an Ashwin delivery on nine and sliced it to Rohit Sharma, who took a difficult catch.

And when Handscomb miscued a pull shot off Shami on 14 to Pujara, they were in deep trouble.

Play had started 30 minutes early to make up for rain disruptions on Saturday, with Australia desperate for an early breakthrough to build on the momentum after Virat Kohli fell to Lyon near the close on day three.

Pujara brought up 50 with a three off Lyon and hardly looked troubled until the off-spinner fooled him half an hour before lunch and Finch caught him off bat and pad.

It was a crucial 87-run partnership with Rahane, who survived a bat-pad catch decision off Lyon on review.

The vice-captain rubbed salt in the wound by smacking the next ball for four and brought up his 16th half-century with another boundary.