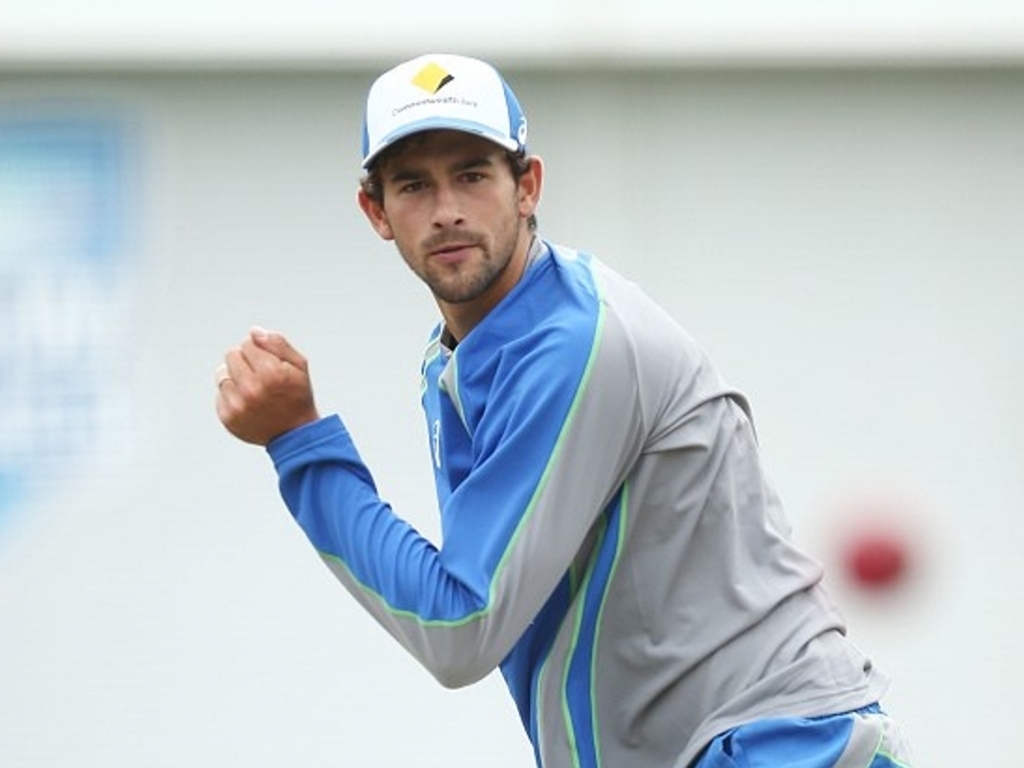 Australia spin-bowling allrounder Ashton Agar has spoken highly of the assistance he has received from senior bowlers Nathan Lyon and Steve O’Keefe.

Agar cracked the squad for the India tour with Australia desperate to add more slow bowling options as they seek to arrest a nine match losing streak in Asia.

The WA man was in good form with the ball in an intra-squad warm up in Dubai taking 4 for 41 in his twelve overs.

“Its always nice to bowl out in the middle in a competitive environment and against some really good players.

“It was a really good hit out for everyone.”

Agar was something of a surprise selection having taken 16 wickets in four Sheffield Shield games at an average of 27.81 and scored just 115 runs in his 6 innings with a highest score of 35.

He did however show glimpses of real quality as he played a role in the Perth Scorchers successful Big Bash League campaign which saw the Western Australian franchise seal a record third title.

When asked how important these kind of warm up games in terms of selection, Agar confessed that he wasn’t really thinking about that at this stage.

He would add: “They are always important, having a centre wicket session.

“Mind you it is a practice game so I’m just taking confidence out of that from my bowling.

“I’m not really thinking too much about selection just trying to do the right thing out in the middle.”

When asked whether he has already made some adjustments to his bowling as he prepares for the challenges of bowling in India Agar indicated that he had made some alterations under the advice of senior bowler Nathan Lyon.

Agar replied: “Yeah definitely, the spinners have been working really closely together in the nets. Gazza [Lyon] and Sok [Steve O’Keefe] have been wonderful with their experience and Shwepo [Mitchell Swepson] coming in and bowling really aggressively in the nets has worked really well.

“We have had good conversations and I think we are adjusting accordingly.”

Agar lifted the lid on a bit of a dispute among the Aussie bowlers with Mitchell Starc of the belief that Nathan Lyon hadn’t caught him out but the young man from Western Australia confirmed the catch was good, if he is to be trusted of course.

He said: “I think Starcy didn’t think that it carried but it definitely carried, great catch, low, diving to his and it just stuck beautifully so serious bit of fielding.”

Speaking on the form of WA teammate Shaun Marsh Agar said: “He’s just been in great touch for a long time now his innings was just calm and composed and his feet were moving beautifully and that’s always a good sign when Shaun is batting and his feet are moving quickly that’s when you know he is in some good nick so I’m very happy for him.”

He may have scored 98 in his debut against England from the number 11 position but Agar would be the first to admit that he needed to work on his batting and that he has done.

Agar said of working on his batting: “Its been awesome coming to Dubai to do that actually cause we’ve had long net sessions and there has been plenty of time to practice my batting as well as my bowling and hopefully I’ll get a hit out in the middle tomorrow so the balance is going really well.”

Agar made the trip to India with Australia A along with Peter Handscomb and that experience could prove valuable for both men when they face up to the number one side in the world in their own backyard.

Of his experience with Australia A in India Agar said: “Learning how to bowl in those conditions, learning the areas, the seam angles with pace, all the different things you have to do when bowling over there because it is a lot different to how we bowl at home.”

Agar hasn’t played a Test since the 2013 Ashes series but he feels he has developed immensely as a cricketer in that time.

“I think I just have an understanding of what makes me the cricketer I am, I think I have matured a lot in the last four years. I played a lot more games than I had when I first played those two Tests and I feel like I’m much better prepared for it as a person as well I think just much more calm.”