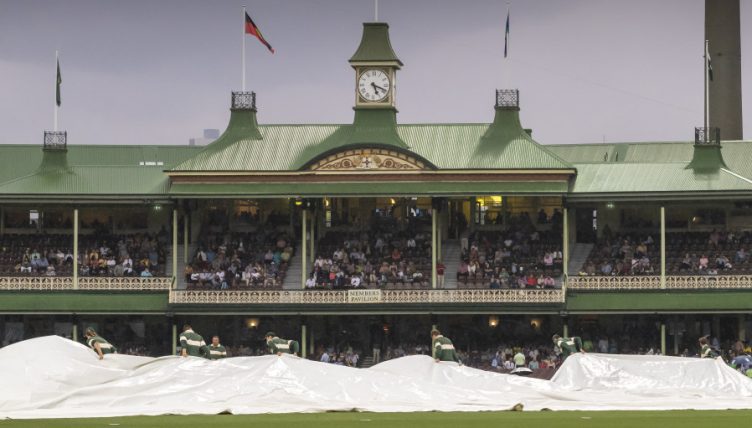 Wet Sydney weather denied Australia the chance to assume the mantle of number one ranked T20 team after their first encounter with Pakistan ended in a no result.

The Aussies currently sit third in the rankings, but a 3-0 series whitewash over current top team Pakistan would’ve jettisoned Australia into top spot – providing New Zealand inflicted a few bruises on England in their respective series.

Pakistan were put in to bat after their counterparts won the toss, and new captain Babar Azam set the standard with five fours and two sixes in his thunderous 59 not out.

Partners came and went in quick succession at the other end, however, with wicketkeeper-batsmen Mohammad Rizwan the only man to offer significant resistance with his near run-a-ball innings of 31.

Mitchell Starc and Kane Richardson took two wickets apiece as the truncated innings finally concluded with Pakistan 107/5, with Australia set a revised target of 119 from their 15 overs.

Any hopes of a Pakistan hold-out were quickly demolished by Aaron Finch, with the destructive opener clubbing a mighty 37 from just 16 balls before further inclement weather called time on any hope of a positive result.

With just 11 further deliveries required to make the result official, Finch was particularly displeased with the umpire’s decision to take the full 20 minute break between innings.

“If you’re cutting overs off the game and you still have a 20-minute break, it doesn’t make much sense to me,” Finch said to the media in his post-match interview (via ESPNcricinfo).

“When you lose a few overs and then you still have a 20-minute break… I thought that was really interesting. But it’s part of the rules and you can’t do much about it.”

The second T20I of the three match series will take place on Tuesday November 5 in a day/night occasion.