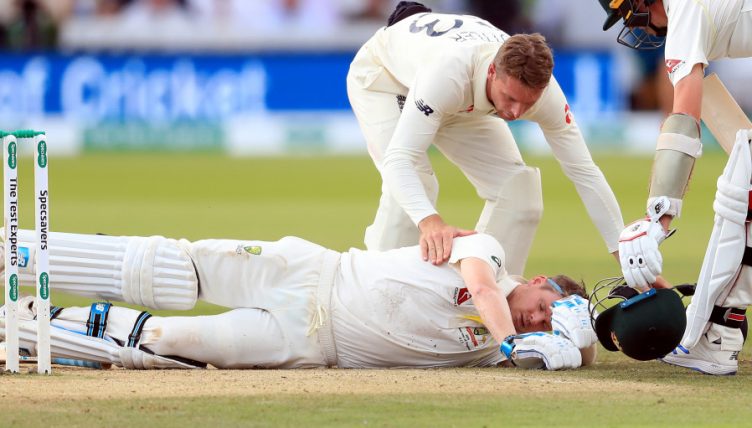 Cricket Australia’s Sports Science & Sports Medicine Manager, Alex Kountouris, has defended the decision to allow Steve Smith to resume his innings after being struck in the neck by a thunderous 92mph bouncer, despite later being ruled out with a concussion.

Smith took a vicious direct blow to his neck mid-way through Saturday’s afternoon session at Lord’s and initially retired hurt, but later returned to the field of play as Australia looked to eradicate England’s first innings lead on day four.

The star batsman added just 12 more runs in uncharacteristically shaky fashion, and woke up the following morning complaining of a headache and grogginess.

🔥 🏏 @willfordy25 with his assessment of a thrilling final day at Lords pic.twitter.com/uBtvd1q0gs

Cricket Australia lodged an appeal to replace the 30-year-old with international cricket’s first ever concussion substitution, with Marnus Labuschagne stepping in and frustrating England on day five with a hard fought innings of 59.

The decision to allow Smith to return to action on the day of the incident sparked debate, but Kountouris claims that Smith had passed the concussion checks on the day, with the symptoms only flaring up the following morning.

Speaking to the press on Monday, Alex Kountouris said that all the necessary protocols had been followed diligently and that “about 30% of concussions are delayed”.

“We’ve got a protocol in place. Part of that process was to make a determination at the end and he clearly didn’t have a concussion so we allowed him to go back on the field,” he added.

“In this case, overnight or the next morning he developed some symptoms and when we did the testing again he didn’t actually pass his concussion test.”

“The reality is at the time he didn’t have a concussion.

“If we pulled every player out who had a head impact we’d be pulling out 80% of players who don’t have concussion so that would be an overreaction.

“It’s pretty clear for us. We’ve got a doctor there. He is an expert in this field and trained to pick up even the minor signs of concussion.

“He was very confident that Steve was fine. He didn’t have concussion at the time so he was allowed to play.

“If we’d left him out of the game we would have been leaving him out for no reason other than what we saw on the field.”