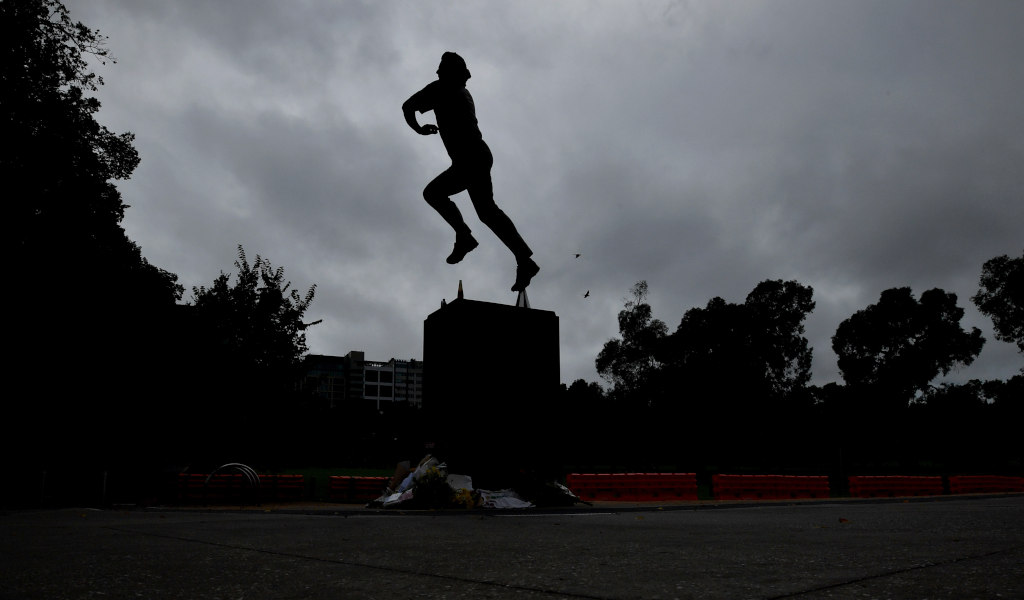 The life and lasting legacy of Shane Warne was remembered by family, friends, former team-mates and rivals at a moving state memorial service in Melbourne.

Tens of thousands of spectators turned up to Warne’s beloved Melbourne Cricket Ground to pay tribute to the Australia great, who died aged 52 earlier this month from a suspected heart attack in Thailand.

Warne’s father Keith said the future without his son was “inconceivable” but that he had done more “than most people would in two lifetimes” while the former leg-spinner’s daughter Brooke described her father as a “shining star”.

The service started with the Australian national anthem sung by Greta Bradman – granddaughter of Sir Donald Bradman, named alongside Shane Warne as one of the Wisden Cricketers of the Century in 2000 – and concluded with the unveiling of the Shane Warne Stand at the MCG to replace the Great Southern Stand.

There were pre-recorded musical tributes from Elton John, Ed Sheeran, Robbie Williams and Coldplay’s Chris Martin while Warne’s larger-than-life character was celebrated as much as his on-field deeds.

He was branded a “genius” and “genuine” respectively by former Australia captains Allan Border and Mark Taylor, who added on the MCG stage: “(Warne) made slow bowling fashionable again. He made it cool.

“I think we who were lucky enough, and (Border) and I captained him, really appreciate it because it made us better captains and better leaders.”

Warne took 708 Test wickets, which was a world record when he brought a storied 15-year international career to an end in 2007 but has since been surpassed by Muttiah Muralitharan, while there were a further 293 one-day dismissals, with the Victorian instrumental in Australia’s 1999 World Cup win.

He was branded, tongue-in-cheek, as a “dead-set bogan” by former Australia quick Merv Hughes, an “entertainer” by ex-England captain Nasser Hussain and simply “the king” by West Indies great Brian Lara.

Another of Warne’s biggest opponents, India’s Sachin Tendulkar, was among the video tributes, as was former Australia team-mate Glenn McGrath and ex-England captain and all-rounder Lord Ian Botham.

Australia Prime Minister Scott Morrison was in attendance at the MCG, where Warne took an Ashes hat-trick in 1994 and collected his 700th Test wicket a few days before ending his international career.

So, too, were a number of former team-mates including Steve Waugh, Adam Gilchrist, Brett Lee, Andrew Symonds and Michael Clarke at a ceremony that interspersed emotional poignancy with anecdotal levity.

Keith Warne said in his eulogy: “Friday March 4, 2022, darkest day in our family’s life. It was a day that our son, Shane Keith Warne, was tragically and suddenly taken from us.

“Looking forward to a future without Shane is inconceivable. We do take comfort in knowing that Shane packed more in his life of 52 years, five months and 19 days than most people would in two lifetimes.

“Shane said of himself, ‘I smoked, I drank, and I played a little cricket’. Mate, your mother and I can’t imagine a life without you. You have been taken too soon and our hearts are broken.”

A private funeral has already been held for Warne but the memorial service, open to the public, offered an opportunity to bid farewell to one of the greatest cricketers and personalities the game has known.

Warne’s son Jackson, wearing a scarf of his father’s AFL team St Kilda draped over his shoulders, thanked those for attending and said: “I feel like I have been robbed as you were taken way too soon.

“But I won’t forget the feeling of just being around you and how loved you always made me feel and how safe I was when I was with you. I’m so proud that you were my Dad.”

Sister Summer said: “Dad was our shining star in life and now he’s shining down on all of us” while her sibling Brooke added: “You will always live forever inside my heart and I will continue your legacy. May you now rest in eternal paradise, I love you so unconditionally much.”

Actor Hugh Jackman said Warne “sucked the marrow out of life” while there were also fond tributes from singers Kylie and Dannii Minogue.

Warne’s brother Jason added: “He will leave a massive hole in my life that will never be filled. I will always love him and will always miss my big brother. Rest in peace, mate.”