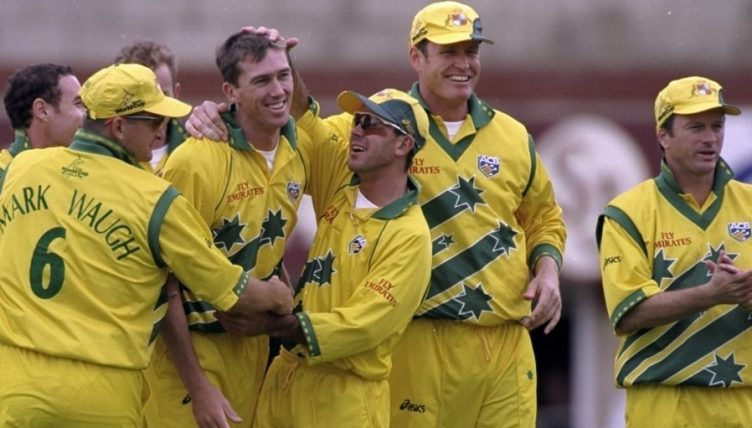 In yet another hammer blow to democracy, a poll to decide Australia’s next retro ODI kit has been won by the objectively awful 1999 World Cup kit.

And it wasn’t even close, the garish yellow-and-shooting-star monstrosity cruising through all three rounds of the eight-kit bracket with roughly two-thirds of the votes in each of its three contests as stone-cold classics like the 1992 World Cup shirt were left trailing in its hideously ugly wake.

Australia had earned rave reviews for the excellent retro kit they wore in the recent ODI series against India but they just had to go and ruin it.

It all comes down to this… The final! Which retro kit do you want to see the Aussie Men wearing in the ODIs next summer?

Make sure you cast your vote! #PickTheKit

We must hope that at the very, very least the Aussies will also be bringing back the canary yellow helmets they wore when claiming the title in England in 1999, otherwise the whole thing is just an unmitigated disaster.

Australia will wear the dreadful kit for their home ODIs next winter, with no confirmation as yet on what they will wear at this summer’s World Cup, the first to be played in England since 1999. It can’t possibly be worse.

There is also some enjoyment to be had from Australia picking the very canariest and yellowest shirt on the list despite their continued and baffling insistence that their shirts are gold, like they’ve somehow never set eyes on a Wolverhampton Wanderers kit despite Kevin Muscat’s five years of redoubtable service at Molineux.

We can understand how Australian fans’ happy memories of the 1999 tournament may have blinded them to the kit’s shitbone awfulness – the semi-final against South Africa remains a contender for the funniest and therefore best cricket match ever played – but this still seems an extraordinary and avoidable disaster. Democracy simply doesn’t work.