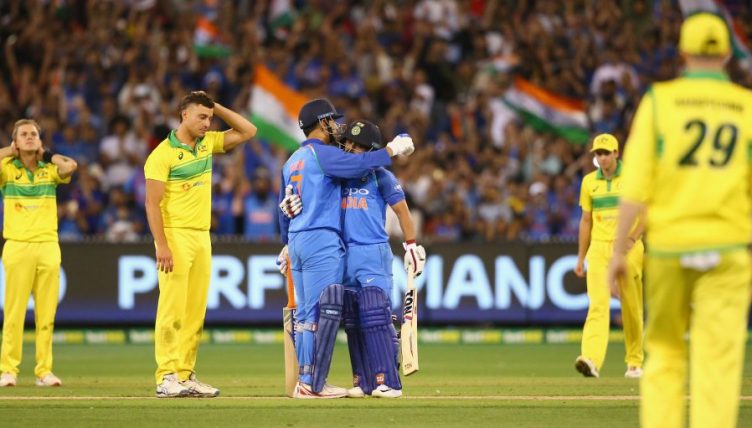 Is there any target MS Dhoni can’t take to the final over of a run-chase?

After steering India home in the second ODI, the old master was up to his tricks again in Melbourne as India sealed a 2-1 ODI series victory over Australia with a seven-wicket victory.

Australia had stumbled to just 230 all out in 48.4 overs, their innings pretty much scuppered in the middle overs by man-of-the-match Yuzvenra Chahal’s 6/42 with Peter Handscomb (58 off 63) the only man to pass 50.

The home side’s hopes of an unlikely defence were briefly lifted when Virat Kohli edged Jhye Richardson behind on 46 to leave India 113/3 with 20 overs remaining, but Dhoni – as he so often does – steered the chase meticulously down to the final over to finish unbeaten on 87 from 114 balls. He found a willing ally in Kedar Jadhav (61* from 57), who hit the winning runs in an unbroken fourth-wicket stand of 121 to get India over the line with four balls remaining.

For Dhoni, whose place in the ODI side is under serious pressure from the brilliantly talented Rishabh Pant, this was a third successive half-century. Whether he was the main man responsible for either of the successful run-chases he was involved in is moot.

India have scored another significant psychological blow ahead of the World Cup, for which they will vie for pre-tournament favouritism with hosts England.

Australia, though, have it all to do if they are to defend a trophy they have grown accustomed to winning having taken four of the last five titles going back to their win the last time England hosted the Cup in 1999.