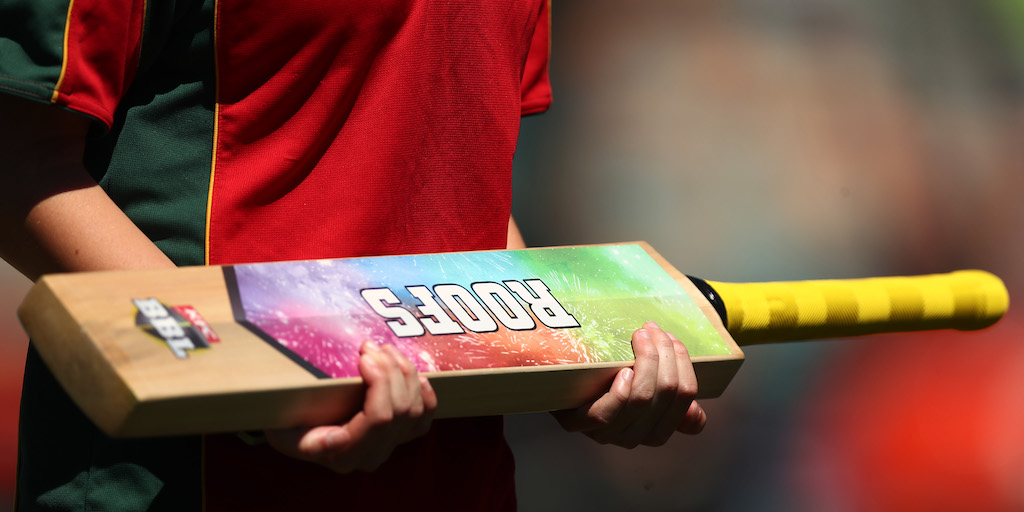 A coin toss is pretty boring and unceremonial when you think about it really. It certainly doesn’t compare to 3lb piece of wood being chucked 10 feet into the air to determine who will bat first.

“For me it’s a great moment which reflects what BBL is about,” Cricket Australia’s head of the Big Bash League, Kim McConnie, said when the decision was announced.

“If you think about a coin toss, it’s not really what kids do. If you’re out in the backyard what do you do? You toss the bat to decide.

“You’d be surprised at the science that’s gone into this. It is a specially weighted bat to make sure that it is 50-50. I’ve got it from great authority at our Kookaburra friends that this is a tested and weighted bat to deliver that equity.”

Oh Kim, you’ve really helped us lead into the first one…

Well that’s a first! Ashton Turner won the bat flip the second time around and elected to BOWL #BBL08 pic.twitter.com/fQoaqz0fp9

Just utter genius and pure comedy. If we’re supposed to be surprised by the science that has gone into this, then perhaps naturally we shouldn’t be shock that a “50/50” weighted bat produced this.

How about the technique for this bat flip!? Scorchers skip Ashton Turner won and elected to BOWL first #BBL08 pic.twitter.com/PXcWUJF9C9

Nonchalance at its finest. You can tell he was dared by his mates up in the corporate box to do it with one hand, and he delivered. The smirk says it all.

The groundsman will not be happy with this at all. He’s literally thrown it about 20ft in the air.

To be honest, we feel an element of sympathy here. She’s completely misjudged it and almost wiped out a row of photographers and thousands of dollars’ worth of camera equipment. Keeps everyone on their toes, I guess.

Let’s be honest, who looked at the start of this video hoping the Teenage Mutant Steroid Turtle was going to fling the bat into the stratosphere?

6. History mak….wait Matty? Is that you?

Ah, the first ever bat flip. A historic moment in Australian T20 cricket, and perhaps something that could go on to revolutionise the game. And yet it was still overshadowed by Matthew Hayden’s midlife crisis turn-up jeans and white trainers.

.@HurricanesBBL have won the bat flip and will bowl first here in Hobart #BBL08 pic.twitter.com/P2XWeGWjFQ

Nothing out of the ordinary here, and a solid flip from these two. Unlocks future doors for double acts to come and try their hand: what are Mark and Steve Waugh up to?

Mr Cricket @mhussey393 keen to take the Bat Flip to the next level?! #BBL08 pic.twitter.com/57xl9KYPDM

Not sure if Mike Hussey genuinely feared for his safety here, or if he just wanted to show that he still has the hand-eye coordination of Bruce Lee.

Another one that nearly enters low-earth orbit. Cameraman has absolutely no intentions of even trying to follow this one 30 metres into the air, and when it comes down you can feel the sense of dread as multiples pairs of eyes lock on to the giant crater that the toe end has left. Still, Shane Watson liked it.

Mid-match bat flip? If you say so, GOAT #BBL08 pic.twitter.com/qbQ2F3g7Lx

Who said that the bat flip was exclusive to just before the game?

Mate, a cricket bat is about 34 inches long. How on earth have you managed to land this one on the end of the handle? Could go anywhere from there. Dangerous.

This was the actual bat flip.

See this is what we want. More people in ridiculous costumes chucking a piece of wood into the air, not false hope like number 5 gave us.

When you nearly get taken out by the bat flip 😂😮 #BBL08 pic.twitter.com/iBQUkHod25

This is it. We saved the best until last. Everything about this is utterly fantastic. Firstly, Michelangelo’s brother has decided to rock up, but he hasn’t been on the juice. Then you’ve got the poor kid who decides a flat trajectory is the way to go. And the camera angle, capturing the danger from frightening point of view of the assembled media. Superb.

A special mention needs to go to the Big Bash League and the social media accounts of all the teams for embracing such a revolutionary concept. Batflip crazy, eh.