Lyon excited to work in tandem with Agar 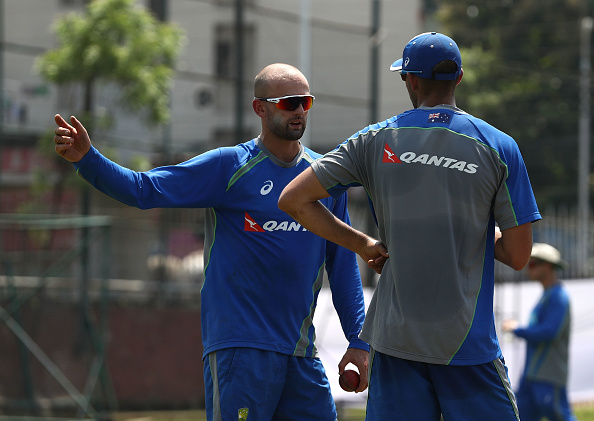 Australia spinner Nathan Lyon is excited at the prospect of teaming up with fellow slow-bowler Ashton Agar in the first against Bangladesh starting Mirpur on Sunday.

Left-arm spinner Agar is set to make his first appearance in Test cricket for four years as the Aussies look set to play two slow-bowlers in what is likely to be spin-friendly conditions.

Uncapped leg-spinner Mitchell Swepson is also in the squad but the Australia selectors appear to be favouring Agar who has the better batting ability.

Lyon told reporters about Agar on Friday “I’ve seen him improve out of sight, really.

“I think he’s bowling really well at the moment. I think he’s confident in his own game and he’s expressing himself, which is what you have to do.

“You have to believe in yourself and go out there and express yourself. He’s in the right mindset, so if Ash gets the nod, I’ve got no doubt he’ll perform well for us.”

Lyon, who has played 15 Tests in Asia, is the most experienced player in the Australia squad in subcontinent conditions and said his partnership with Agar could go a long way to determining which way the two-match series shapes up.

The 29-year-old Lyon, who has 247 wickets in 67 Tests, formed a good bowling partnership with left-armer spinner Steve O’Keefe in India earlier this year, although the Aussies still lost the series.

Lyon continued to talk up Agar, saying: “I think we can work in a pretty similar partnership. We bowled together at the training camp in Darwin at similar times, and no doubt Smithy has a plan on how he’ll use his spinners.

“No doubt we can have a similar partnership as what SOK (O’Keefe) and I did and how it worked in India.

“Unfortunately we didn’t get over the line in India, but I’m confident enough that we’ve got the right squad to get the job done here in Bangladesh.”

The second Test and final between the sides is set to start in Chittagong from 4 September.