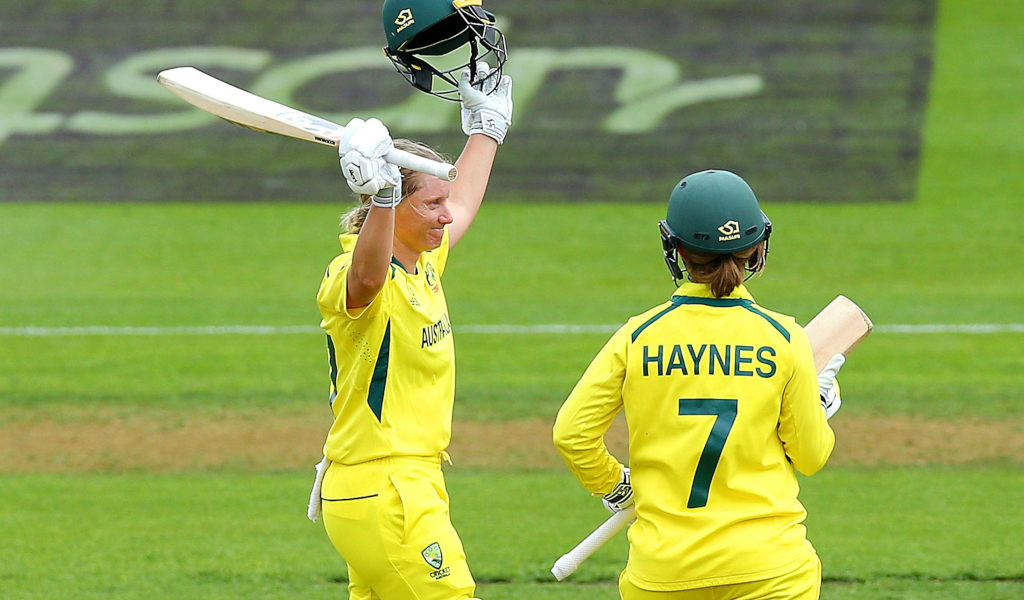 A formidable performance from Australia saw them reach the final of the Women’s World Cup with a thumping win over West Indies in Wellington.

Alyssa Healy hit 129 and Rachael Haynes 85 in unbeaten Australia’s impressive total of 305 for three from a rain-reduced 45 overs.

They were just as dominant with the ball, bowling out their opponents for 148 to clinch a 157-run victory and a place in the final against either England or South Africa.

The West Indies never looked like getting close in their chase, captain Stafanie Taylor was her side’s top-scorer with 48 as the West Indies could only manage a total of 148.

Play got underway one hour and 45 minutes late as thick mist and drizzle started to give way to sunshine with the match reduced to 45 overs.

Having been put in to bat, Australia were undeterred by the West Indies’ fast bowlers running in on a green wicket in gloomy Wellington as they made 37 from the nine-over powerplay.

Healy took her time getting going, she made just 10 from 25 balls through the first ten overs but then picked up the pace to bring up her fifty from 63 balls.

Her second fifty would come off just 28 balls as she achieved a maiden World Cup hundred as she and Haynes earned their 200-partnership within 32 overs.

Healy eventually departed for 129 from 107 balls, including 17 fours and one six, as the West Indies held on to their first catch of the day, substitute Shakera Selman, on for the injured Anisa Mohammed, diving in.

A mini fightback ensued as Chinelle Henry took two wickets in an over, Haynes going first for 85 from 100 balls before Ashleigh Gardner’s promotion from seventh to third ended after 12 runs as the West Indies dragged Australia back to 235 for three.

Lanning and Beth Mooney were there to steady the ship however, the two batters with the highest averages in the tournament, taking Australia to 305 for three from their 45 overs, the largest-ever score in a World Cup knockout game.

In reply, the West Indies made a steady start once again led by Deandra Dottin but soon lost their first wicket as Rashada Williams went for a 10-ball duck, Mooney holding on to a stunning grab off the bowling of Megan Schutt.

Annabel Sutherland did what the Windies could not, safely holding on to a looping catch at long-on to dismiss Dottin for 34 from 35 balls as she had just started finding the boundary regularly.

Hayley Matthews fell for the same score, this time from 49 balls, as Jess Jonassen took the first wicket from spin for the day with her fourth ball, Alana King holding on to a poorly-timed shot at mid-off.

Matthews’s wicket did not spark the West Indies into life as they slipped to 91 for three in 22.4 overs, Taylor joined by Shemaine Campbelle as the required run-rate climbed above 10 an over.

Sutherland chipped in with a wicket as Campbelle sent a delivery straight to Jonassen to depart for eight from 22 balls.

Chedean Nation came out with intent cracking a six from her first ball but could add only more before being run out by Healy.

Kycia Knight followed for a two-ball duck as Jonassen moved to 10 wickets for the tournament and reduced the West Indies to 126 for six.

Gardner then looked to catch Jonassen up getting her ninth of the World Cup to dismiss Ramharack LBW a ball after she was dropped by Sutherland.

Taylor eventually departed for 48 from 74, with four fours, and with it the West Indies innings and run in the World Cup came to an end as the injured Mohammed and ill Henry did not take to the field.

It gave Australia a 157-run win as they advance to their seventh World Cup final, while the West Indies search for a first Women’s ODI World Cup title goes on.