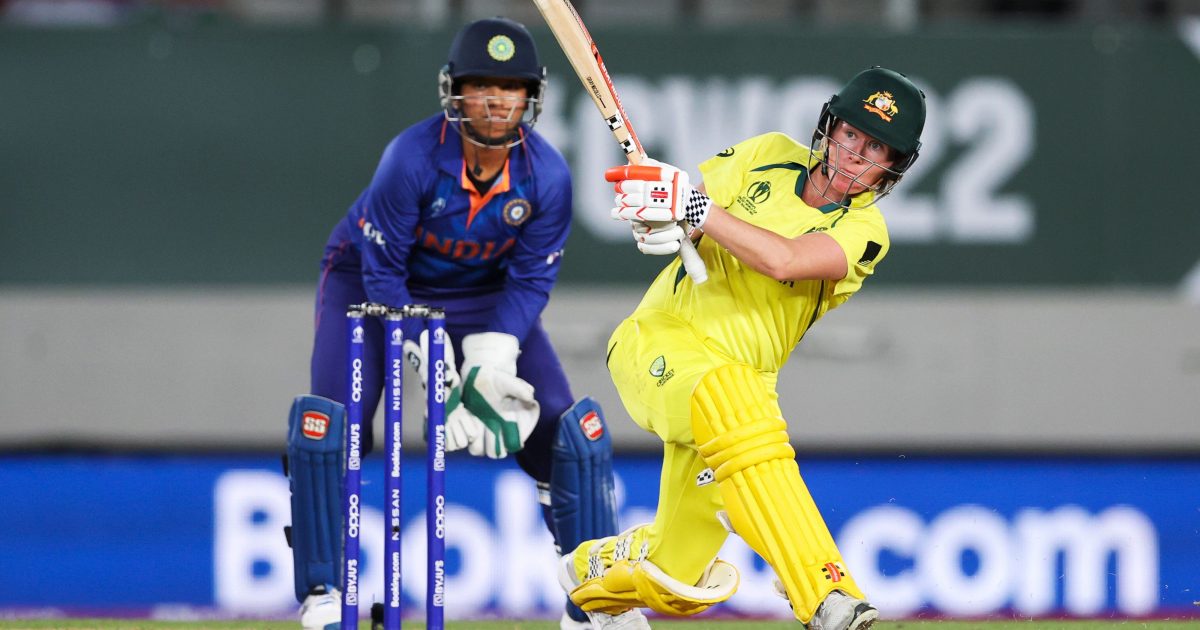 Australia completed a World Cup-record chase of 278 to beat India by six wickets and become the first team to book their place in the ICC Women’s World Cup 2022 semi-finals.

Skipper Mithali Raj’s 68 was one of three fifties for India as they built vital partnerships to frustrate Australia’s bowlers on their way to posting 277 for seven. But Australia’s batters, led by Meg Lanning’s 97, ground their opponents down putting on two 100-run partnerships before a late India fightback saw unbeaten Australia squeak home with only three balls to spare.

Smriti Mandhana added only 10 runs to the 216 she had previously scored in the tournament as she was caught by Lanning at slip to hand Darcie Brown her first wicket.

Megan Schutt was hit for six by the returning Shafali Verma before she too fell to Brown as Beth Mooney held on to a great catch in the cordon to leave India 28 for two.

Captain Raj joined Yastika Bhatia at the crease and the two went about rebuilding for India and they were helped by Ellyse Perry’s eventful first over.

The right-arm seamer conceded 10 runs from wides in a 12-ball over that added 16 runs to the total to help India move to 60 for two off 12 overs.

Both batters brought up their half-centuries off 57 balls before Bhatia had go for 59 from 83 when she sent one straight to Perry in the deep giving Brown her third wicket and ending the partnership on 130 runs, India’s highest third-wicket stand in ODIs against Australia.

Harmanpreet Kaur came out with a similar attacking intent to the last time these teams met at the World Cup – her blistering 171 not out taking India to victory in the 2017 semi-final – and Richa Ghosh was a willing partner as India reached 200 for four with 10 overs to go.

Ghosh was then stumped by Alyssa Healy for eight as King bowled a wicket maiden before Sneh Rana fell for a five-ball duck when she was clean-bowled by Jess Jonassen as India lost three wickets for 27 runs.

Only one more wicket would fall and it wasn’t until the final ball of the innings when Pooja Vastrakar was run out by Jonassen for 34 from 28.

It mattered little as she shared a 64-run stand with Kaur to help rescue India from a wobble and set Australia an imposing 278 to win, 20 more than they had knocked off against Sri Lanka in 2017, the previous highest chase at a Women’s World Cup.

Australia made a fast start to the chase taking 67 runs from the powerplay without loss as the bad balls were punished by openers Healy and Rachael Haynes.

Healy departed for a well-made 72 from 65 balls but could count herself unlucky after her reverse-sweep found Raj at midwicket who took a good catch to give Rana her first wicket of the game.

Suddenly there were two new batters at the crease as Rachael Haynes also departed for 43 from 53 balls, edging a short ball from Vastrakar into the gloves of Ghosh.

Australia were undeterred by the two quick wickets, however, as Lanning and Perry combined to put on another century stand in the game.

The pair reached 102 before the expected rain finally arrived and once the game resumed with a wide, Perry then had to go for 28 from 51 balls when she sent a Vastrakar full toss straight to Raj at cover.

Even Jhulan Goswami in her 200th ODI could not stop Lanning who looked certain to make a century until an incredibly rare error on 97 gave Vastrakar a low catch off the bowling of Meghna Singh.

With eight needed from the final over, Mooney had the calmest head in Eden Park, completing the chase with three balls spare to move Australia into the knockouts.