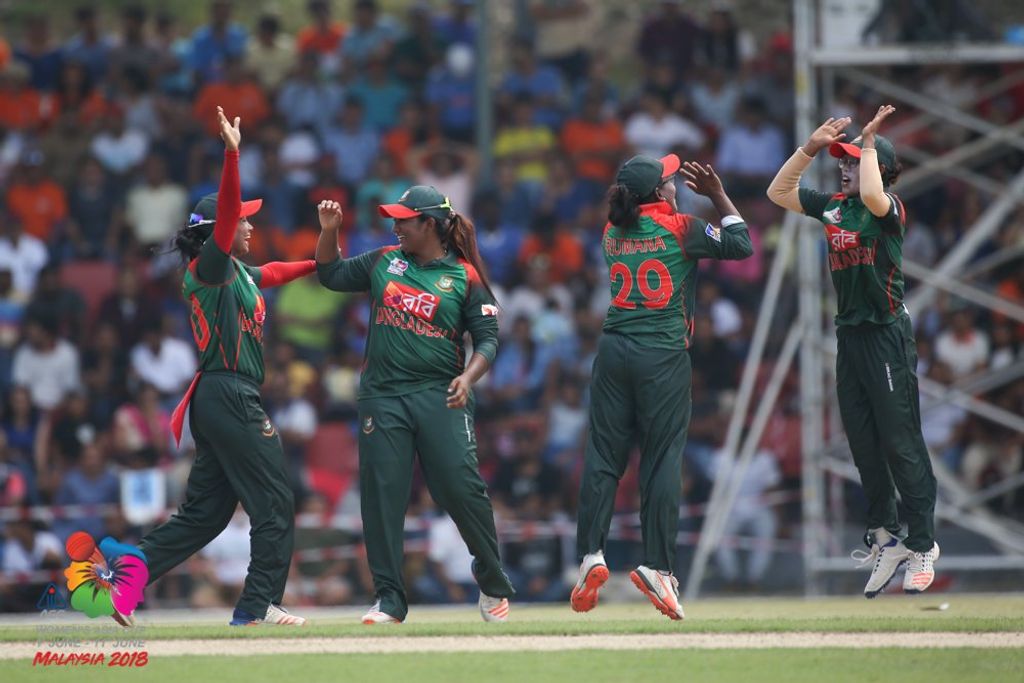 Bangladesh stunned India for the second time in the same tournament to win the Women’s T20 Asia Cup title on Sunday in Kuala Lumpur, Malaysia.

The Bangladesh Women restricted India to 112/9 in their 20 overs and then kept their cool through a tricky chase, even as Poonam Yadav ran amok, to win by three wickets off the last ball as Jahanara Alam scored the two runs needed.

The underdogs started the chase well with Shamima Sultana (16) and Ayasha Rahman (17) adding 35 runs for the opening wicket in a shade under seven overs. Yadav then weaved her magic, getting rid of the openers off consecutive deliveries.

While Rahman top edged a sweep straight into the hands of Jhulan Goswami at short fine-leg, Shamima whacked a delivery to Mithali Raj at cover.

Fargana Hoque slammed a cracking four during her stay at the crease before Yadav struck yet again, getting rid of the Bangladesh No.4 with Taniya Bhatia taking smart catch behind the stumps to leave Bangladesh at 55/3 in the 12th over.

With the required rate rising, things started to become a tad difficult for Bangladesh but Nigar Sultana ensured there was no panic.

She hit Goswami for three successive fours in an over to ease the nerves and get the rate down. But in the last over of her spell, Yadav bowled a low dipping full toss and Nigar could only mistime it as far as Deepti Sharma at cow corner.

Ahmed kept her side in the hunt for a majority of the time despite wickets falling at the other end. It all came down to the last over with Bangladesh needing nine to win.

She struck the second ball of the over for a boundary to bring the equation down to four in four, but was then run out off the penultimate ball for 23.

With Bangladesh needing two off the last ball, Jahanara Alam kept her cool to whip Harmanpreet Kaur to deep mid-wicket and spark wild celebrations in the camp.

Yadav finished with incredible figures of 4-0-9-4 but it wasn’t enough to get her side over the line.

Earlier, Salma Khatun’s decision to send India in to bat was vindicated with Bangladesh reducing the Kaur-led side to 32/4 inside the first 10 overs.

Smriti Mandahana was the first to fall, run out in the fourth over of the innings for 7. Sharma, batting at No.3, then paid the price for swinging across the line as she chopped Alam back on to her stumps.

India then found themselves in trouble at 74/7 after 15 overs but that was when Kaur decided to take matters into her own hands.

With the experienced Goswami by her side, the India captain began looking for the big hits, and swept Khatun to the deep square-leg fence to bring up India’s 100 and then followed it up with an exquisite inside-out shot over the covers to reach her fifth half-century in the format in just 38 deliveries.

On the day, though, her brilliant batting effort as well as Yadav’s super spell went in vain as Bangladesh played as a team and won the big moments and took the Women’s T20 Asia Cup.