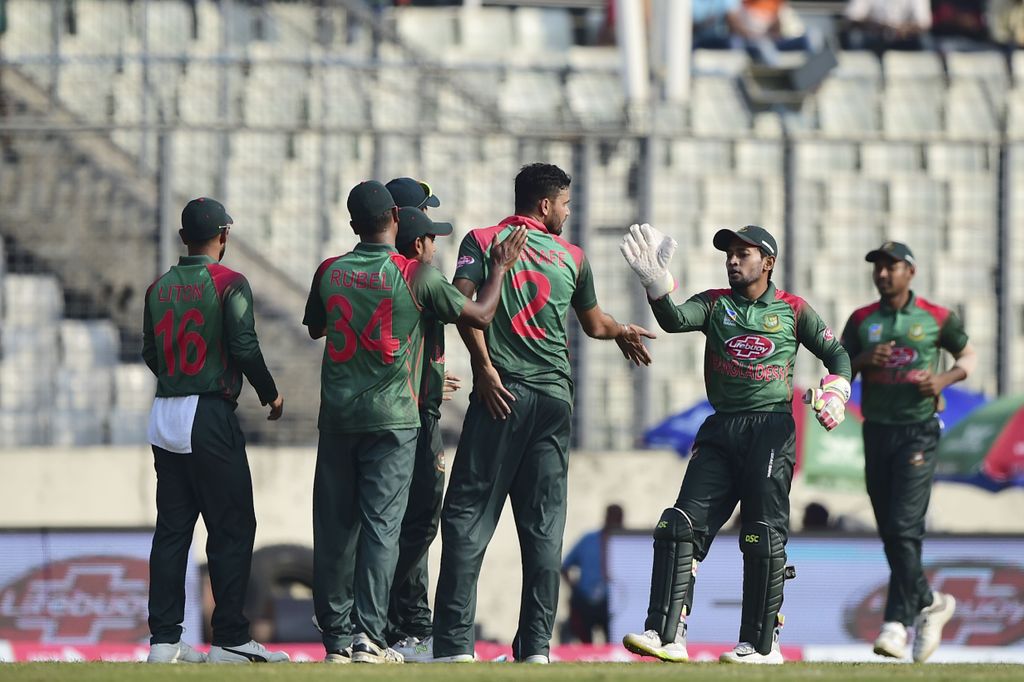 Mushfiqur Rahim hit an unbeaten 55 as Bangladesh beat West Indies by five wickets in the first ODI of a three-match series in Dhaka on Sunday.

Set a modest target after three wickets each from Mashrafe Mortaza and Mustafizur Rahman helped Bangladesh restrict West Indies to 195-9, the hosts coasted to 196-5 with more than 14 overs to spare.

Mushfiqur shared in a 57-run partnership with Shakib Al Hasan for the fourth wicket to steady Bangladesh’s innings after the visitors had reduced the home side to 89-3 on a slow pitch at the Sher-e-Bangla National Stadium.

Rovman Powell dismissed Shakib for 30 to break the stand but Soumya Sarkar killed off the visitors’ hopes with a cameo innings of 19 from 13 balls.

Mushfiqur pushed Roston Chase for a single to complete his 31st fifty in ODIs before an outside edge to leg-spinner Devendra Bishoo flew to third man for two runs to wrap up the victory.

Opener Liton Das scored 41 for the hosts to give the hosts a solid start to the run-chase.

Earlier, the Windies owed their below-par total to 43 off 59 balls by opener Shai Hope and contributions from lower-order batsmen Roston Chase (32) and Keemo Paul (36).

The visitors, who opted to bat first after winning the toss, had been restricted to 127-6 after 40 overs despite Hope’s effort, but Chase and Paul put on 51 for the seventh wicket to give their bowlers something to fight for.

Bangladesh left-arm pacer Mustafizur finished with 3-35 after fellow fast bowler and skipper Mashrafe grabbed 3-30 playing his 200th ODI – the first Bangladeshi to do so.

The second match of the series will be held at the same venue on Tuesday.