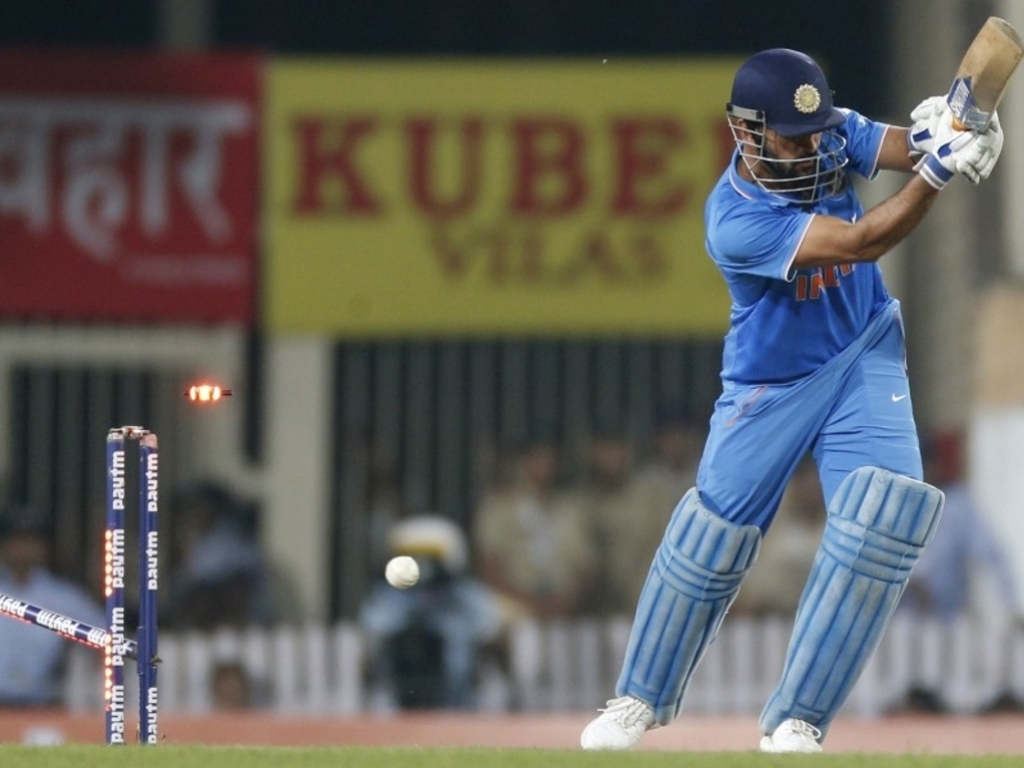 New Zealand restricted India to 241 all out in 48.4 overs overs to win the fourth ODI at Ranchi by 19 runs and level the series at 2-2 with one to play.

The Black Caps looked set to score more than the 260/7 they achieved in their fifty overs after a bright opening stand of 96 between Martin Guptill and Tom Latham.

Axar Patel was rewarded for some disciplined bowling when Latham (39) mishit his sweep to short fine leg after he was deceived by a change of pace.

Guptill ended a run of poor scores and shared a handy partnership with skipper Kane Williamson before departing for a well played 72 off 84 balls.

New Zealand will be disappointed that none of their top order could play the long game as Williamson (41) and Ross Taylor (35) looked well set but couldn’t make the most of the opportunity.

Amit Mishra was the pick of the India bowlers with his 2 for 42 from 10 overs, while Axar was excellent but got just one scalp for 38 runs in his ten.

It became immediately obvious that the Black Caps were up for the scrap in the field and Southee produced a beauty of an outswinger to have Rohit Sharma caught for 11 and leave India 19 for 1.

India’s top order suffered from the same affliction as New Zealand’s with Ajinkya Rahane (57) and Virat Kohli (45) couldn’t make the most of their starts.

MS Dhoni was disappointing with the bat taking 31 balls to amass just eleven runs before he was castled by Neesham to stun the vociferous Ranchi crowd into silence and there was no denying it was a massive moment.

Manish Pandey made 12 before the first of two great catches from Latham gave Southee his second wicket and India were 154 for 5 in the 33rd over.

Southee got his third the very next ball when Kedar Jadhav missed a cutter on middle to be trapped leg before for a first ball duck.

Hardik Pandya (9) has been singled out as a potential finisher for India but he couldn’t do the job in Ranchi as he fell victim to the second great grab from Latham as the economical Santner got among the wickets.

Bad running between the wickets would cost Mishra (14) his wicket as Patel (38)  sends him back and Santner is efficient in the field and runs him out.

Trent Boult used raw pace to end Axar’s bid to be India’s hero bowling him just two balls after the Mishra run out to leave India’s chase in tatters at 207 for 9.

Dhawal Kulkarni (25 not out) gave the crowd hope with a fighting knock and with three overs to go India needed 27 to win.

Southee produced a great 48th over restricting India to four leaving the hosts needing 23 to win off 12 and the final pair in the middle.

Boult didn’t allow India to take the game to the final over, he deceived Umesh Yadav who mis-hit straight to cover where Taylor took the grab that levelled the series.

Southee would end as the best Black Caps bowler statistically with figures of 3 for 38 from 9 overs.

The finale of this thrilling series will be staged at at Visakhapatnam on Saturday the 29th of October.