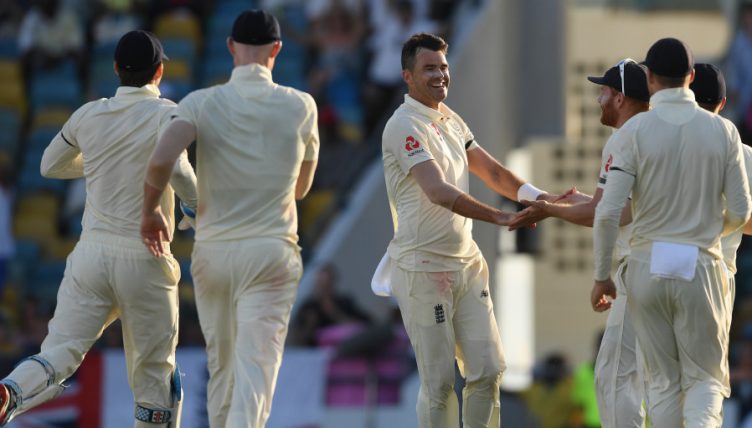 James Anderson proved himself indispensable once again as he lifted England with a four-wicket burst on the opening day of the first West Indies Test in Barbados.

On the same day his long-term partner Stuart Broad found himself edged out of the side, Anderson showed why his name remains inked on the team sheet in permanent marker with an inspired spell that turned a platform of 174 for three into 264 for eight.

After bowling with painstaking economy early on the country’s record wicket-taker seized the moment in the evening session, seeing off the settled duo of Shai Hope and Roston Chase, bouncing out Shane Dowrich and finishing with a caught and bowled off captain Jason Holder.

He closed with four for 33 and another memorable day in the Caribbean to his name.

Ben Stokes also deserved great credit, pounding some life into a gentle pitch to claim three wickets, but Jos Buttler dropped Shimron Hetmyer on three, a lifeline the Guyanese grasped to finish the day with a flamboyant and stroke-laden unbeaten 56.

Broad’s absence from the side had raised some eyebrows, though it was hard to conceive an XI that would not, Curran having won all seven of his Tests to date.

His spell with the new Dukes ball failed to impress, though, a stubborn lack of swing and a slow pitch combining to neuter his effectiveness. Anderson was on target at the other end but debutant John Campbell, presented with his cap by the great Sir Garfield Sobers in the morning, took a liking to Curran.

A couple of early boundaries leaked through the vacant third man area and when Curran dropped short a neat swivel pull raced to the ropes. Campbell had dominated the opening stand with Kraigg Brathwaite, scoring 44 of the first 50 runs, but allowed his ambition to get the better of him when Moeen Ali came on.

After two dicey sweeps he missed a third entirely, lbw down on one knee. It was the morning’s only success as Brathwaite and Hope – England’s conquerors at Headingley in 2017 – settled in to a controlled stand of 69 either side of lunch.

Brathwaite came out of his shell long enough to drag Moeen for six over midwicket and Hope announced himself by leaning into a lovely off drive that left Stokes kicking the turf at the bowler’s end.

Yet it was the Durham all-rounder’s second spell that England rallied around in the afternoon, a couple of well-directed bouncers asserting him on proceedings and forcing the batsmen on to the back foot.

When he went fuller Brathwaite squirted a low catch to Root at slip, departing after three hours with 40 to his name. By now there was a hint of cloud cover and some much-needed swing to be found, Stokes tapping into it straight away to hoop one into Darren Bravo’s front pad at yorker length.

The Trinidadian has spent two years away from the Test arena and this five-ball stay made for an anticlimactic return.

The West Indies were still shaping up to end the day well on top until Anderson summoned his muse and altered the direction of the game.

Hope was first to fall for 57, losing concentration and nicking an inside edge to the alert Ben Foakes.

Anderson waited for the new ball to arrive before ramming home the point but used it to devastating effect. Roston Chase fed Root at slip for 54, Dowrich got into a fearful tangle when Anderson went short and Holder offered a simple return catch as the Windies lost control.

Stokes got in on the act once more before stumps, beating Kemar Roach for pace and removing any lingering thoughts of Broad.