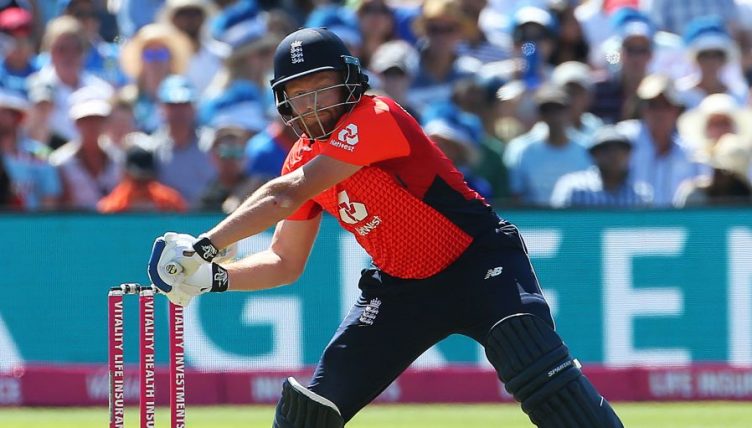 Jonny Bairstow’s 68 from 39 balls helped England to a comfortable four-wicket victory over West Indies in the first of three T20 internationals.

Bairstow’s highest T20I score meant England were rarely in serious trouble in pursuit of a potentially ticklish 161 for victory on the same St Lucia pitch where England succumbed for just 113 in the final ODI three days ago.

Alex Hales set the tone for the run-chase, hitting the first ball of the innings over the rope and the second to it before falling to the final ball of Sheldon Cottrell’s over to leave England 17/1 after the first six balls.

Joe Root’s T20 struggles continued, given out lbw on the charge against Cottrell (3/for a two-ball duck, while Eoin Morgan looked a world away from the player who shone in the 50-over games, making a laboured eight from 15 balls before miscuing to midwicket to give Chris Gayle a simple catch.

That fast start and Bairstow’s excellence meant England were always ahead of the rate, though, and a 50-run stand between Kent pair Joe Denly (30 off 29) and Sam Billings (18 off 16) got the job done with seven balls to spare and little of the drama seen in the Three Lions’ last batting effort,

Earlier, West Indies had been indebted to Nicholas Pooran’s shot-filled 58 to lift them to a competitive total after a sluggish start.

Gayle made just 15 from 12, caught by Adil Rashid off Chris Jordan, while Tom Curran removed Shai Hope and Shimron Hetmyer to force Pooran and Darren Bravo to rebuild the innings from 40/3.

Chris Jordan – as he has a habit of – pulls off an absolutely stunning diving catch off his own bowling to dismiss Darren Bravo!

Rashid got through four overs of high-class leg-spin to take 1/15, while a remarkable one-handed caught-and-bowled from Jordan did for Bravo (28 off 30).

Some brief but enterprising efforts from Fabian Allen, Jason Holder and Ashley Nurse helped Pooran lift the West Indies to a competitive score, but once England had taken the target down to double-figures inside the powerplay it always looked short. The Windies did themselves few favours in the field, with four chances of varying difficulty going down.