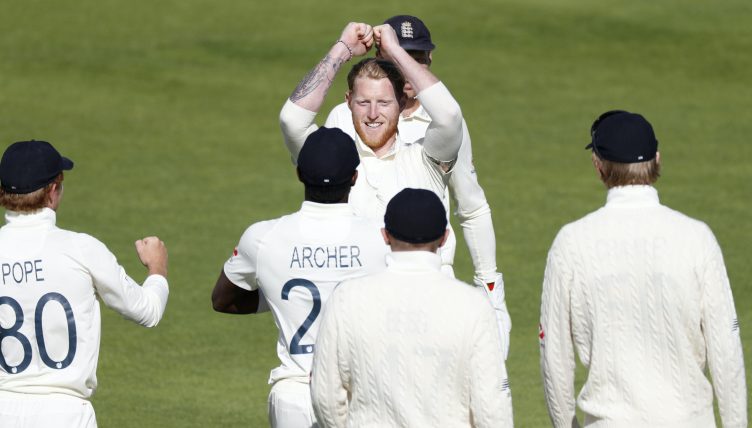 England captain Ben Stokes rallied his side with four wickets on day three of the first #raisethebat Test but the West Indies were still able to leave the field with an enviable 99-run lead.

The tourists established a first-innings gap of 114 as they produced a disciplined total of 318 at the Ageas Bowl, but their advantage might easily have been even larger had Stokes not summoned four for 49, his best figures in two years.

He shouldered the burden after Jofra Archer and Mark Wood, selected ahead of Stuart Broad for their superior pace, turned in a combined return of one for 135, despite the latter’s fierce speed.

Stokes, who appeared to be struggling with soreness as he worked through his decisive final spell, accounted for top-scorers Kraigg Brathwaite (65) and Shane Dowrich (61) as well as his fellow all-rounder and rival skipper Jason Holder.

While he was unable to match the latter’s previous efforts with a five-wicket haul, his dismissal of Alzarri Joseph did bring his Test tally to 150.

James Anderson was also in credit with three for 62, while spinner Dom Bess chimed in with two wickets. Their efforts still left the hosts in a hole at change over, with openers Rory Burns and Dom Sibley making 15 for nought in a trying 40 minutes before stumps.

The West Indies began on 57 for one and, in the best overhead batting conditions yet, got the better of the first session by adding 102 for two wickets.

The first hour was slow and steady, containing just two boundaries and one aborted celebration for the fielding side – when Archer won an lbw against Shai Hope only for replays to show a no-ball.

Hope fell immediately after drinks, and without adding to his score of 16, as he drove hard at Bess and edged to Stokes.

Brathwaite progressed more comfortably, converting his overnight 20 into both the first fifty of the match and his own first since July 2018. His hopes of progressing towards three figures ended at Stokes’ hand, rapped high on the knee roll but deep enough in his crease for the umpire Richard Kettleborough to raise the finger.

Shamarh Brooks and Roston Chase picked up the run-rate nicely before lunch but saw the brakes applied by Anderson and Bess when the afternoon’s play got under way.

In the ninth over of mounting pressure Brooks wafted the bat at Anderson and was on his way for 39 as Jos Buttler gathered the catch. It did not take long to exhaust Jermaine Blackwood’s notoriously small reserves of patience, the recalled number six hacking Bess to mid-off to make it 186 for five.

A lead now seemed certain but a flurry of wickets could still make it a slight one. Instead, Chase and Dowrich put on the biggest stand of the match, 81.

The pair adopted contrasting styles, Chase shelving his aggressive instincts to dig out 47 in 141 balls, while Dowrich signalled his intentions early by getting after Bess.

Add in a couple of half-volleys from under-performing Archer and he was well on the way to fifty. In so doing, the wicketkeeper scrubbed the memory of making 24 runs in six innings on these shores three years ago.

Anderson’s enduring accuracy eventually earned an lbw against the dogged Chase, but without a big effort from Stokes the last session might still have slipped through England’s fingers.

First he evened the score with opposite number Holder, who had dismissed him on day two. The 6ft 7in Bajan managed to get underneath a short ball but merely helped it on its way to Archer. Despite struggling with soreness Stokes kept pounding in, toppling Joseph’s stumps then strangling Dowrich down the leg-side.

It seemed like he was set to complete his fifth five-for, but it was Durham team-mate Wood, who routinely cleared 90mph without joy, who castled last man Shannon Gabriel.

Gabriel and Kemar Roach asked plenty of difficult questions of Burns and Sibley and on another day might have picked up at least a wicket apiece. Instead the 10 overs proved fruitless to set up an intriguing fourth day.