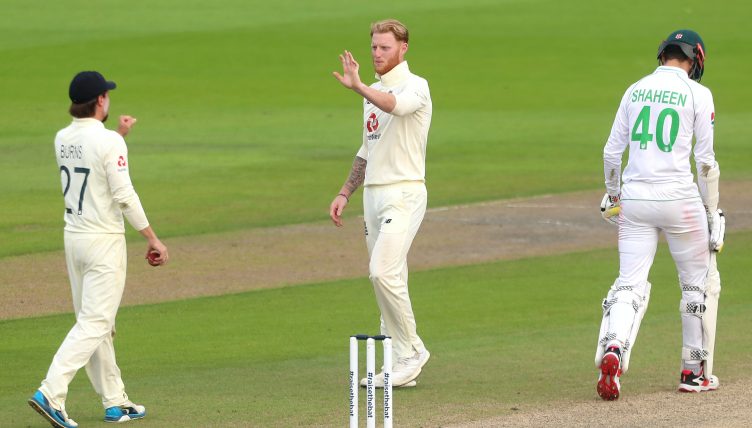 Ben Stokes offered England a timely reminder that he remains “capable of miracles” after ignoring his injury doubts to help set up a tense finish to the first Test against Pakistan.

Stokes’ nagging quad complaint meant England selected him as a specialist batsman for the series opener, but he was eager enough, hungry enough and skilful enough to turn a late cameo with the ball into a vital contribution.

Having been wrapped in cotton wool in the first innings he put himself forward for a late blast on Friday evening and proceeded to take two wickets – the last recognised run-scorer in Mohammad Rizwan and tailender Shaheen Afridi with the final ball of the day.

That left Pakistan 137 for eight, still in the box seat with a healthy lead of 244 but vulnerable to a pursuit that would already have to be the second biggest at Old Trafford.

Stokes, who made a duck earlier in the match, has a well rehearsed history of leading his side to improbable victories following last year’s World Cup final and the Ashes classic of Headingley, and his team-mates know how vital his presence could be.

Chris Woakes, who dismissed key batsmen Babar Azam and Azhar Ali cheaply, said: “I had no idea whether he was able to bowl or ready to bowl, but I’m not overly surprised that he could do what he did. That’s Ben Stokes, we know he’s capable of miracles.

“He’s got a bit of a golden arm, he always has had the knack of picking up wickets. When you are in a bit of dog fight, he’s the sort of player you want in your team. He always put his hand up and gives 110 per cent and he certainly did that picking up a couple.

“You hear a lot about records and chases, how many times it’s been chased at Old Trafford, but things like that are there to be broken.

“We’ll definitely look at those other wins, the sort of wins where you’re written off around this stage of the game. We’ll draw on those experiences. We’ve definitely got the ability to get a win and we’ve got the players who can do it.”

Pakistan may already have enough on the board to see the game home, particularly with a varied bowling attack that has pace, nous and two eager leg-spinners in the ranks.

Yasir Shah took four wickets and Shadab Khan two as the turning ball did for England first time around and their threat could well be dialled up as the pitch continues to wear.

Spin consultant Mushtaq Ahmed, once part of England’s backroom team, tipped them to be an even bigger handful with the game on the line.

“If we set a good target, they can be lethal out there,” he said.

“If we can get another 20 to 30 runs that will be a very good score on that pitch. Yasir and Shadab have hardly played cricket for the last five or six months, but the way they bowled in the first innings I think they’ve got the momentum now.

“They understand the pitch and what pace you need to bowl on it, what fields you need to have to different batsmen. I think they are feeling confident in their bowling now. We are very confident.”