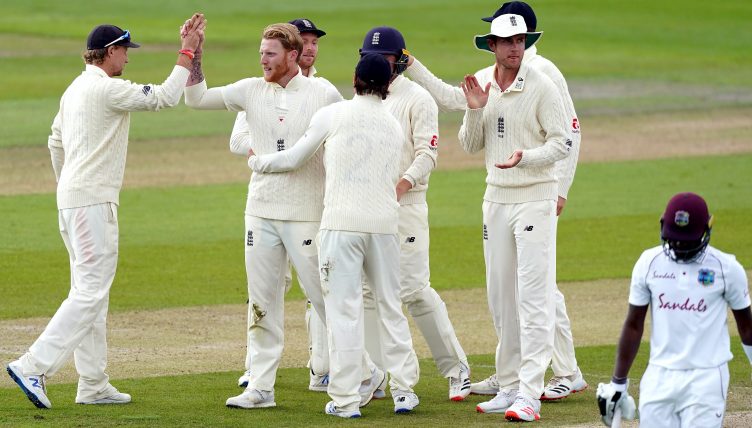 Ben Stokes followed up his day five fireworks with the bat by claiming the crucial wicket of Jermaine Blackwood with the last ball before tea, leaving England needing five more to win the second Test against the West Indies.

The hosts were set fair for a series-levelling victory after a one-sided first session at Emirates Old Trafford, Stokes pounding out a thrilling 78 not out to build a 311-run lead before the Windies limped to lunch at 25 for three.

That became 37 for four when Stuart Broad grabbed his third wicket of the innings but a 100-run stand between Blackwood and Shamarh Brooks threatened to snuff out England’s surge to the line.

It was Stokes, as it so frequently is, who took it on himself to change the game – pounding out a long spell of aggressive short-pitched bowling and drawing a mistake from Blackwood in the last over of the afternoon.

His departure left the score at 137 for five, with a theoretical 42.4 overs remaining and the second new ball hovering in the distance as a potential clincher.

Everything went to plan for the home side on the fifth morning, adding 92 runs in just 11 overs in the first hour then striking three times with the new ball.

Resuming alongside Joe Root on 37 for two – a lead of 219 – Stokes hit top gear almost immediately and never slowed down. Starting on his overnight score on 16, he added another 62 off just 39 deliveries with three sweetly-struck sixes over long-off and four boundaries despite the permanent presence of eight fielders on the ropes.

The Windies made one costly drop, John Campbell allowing the ball to spill from his hands after Stokes carved Shannon Gabriel to deep extra-cover on 29, and Stokes made them pay in full.

He swung hard, connected frequently and ran insatiably to power the cause, with Root run out for 22 attempting to pass him the strike and Ollie Pope chiming in late with 12no.

Broad, whose burst of three for one, advanced the game dramatically on the fourth evening needed all of five balls to get things moving again. Having just been driven for four by Campbell he invited the left-hander to try again, this time shaving the outside edge on the way through to Buttler.

A decidedly muted appeal was waved away but Root decided to review at the very end of his 15-second window. It was a wise decision, leaving Campbell with a second notable failure of the day.

Chris Woakes was bowling with great control at the other end and landed a big prize at the end of his fourth over when Kraigg Brathwaite – the tourists’ most dogged performer – was beaten off the pitch and pinned clean in front of the stumps, lbw for 12.

That left England well ahead but Broad was not finished yet, summoning a killer combination of aggressive lines and a hint of help from the surface to make a mess of Shai Hope’s stumps just before lunch.

Broad landed his third success after the restart, Roston Chase offering no shot to one that jagged in and pinned him on the front pad. A rout briefly seemed possible, until Blackwood starting throwing the bat with customary abandon.

Brooks had a life on 17 when England failed to review what would have been a caught behind and slowly the ball went soft. Sam Curran was expensive, Dom Bess insufficiently taxing and the trail was threatening to go ice cold.

Stokes warmed it up again, attacking the batsmen’s ribs as he had done in the first innings and eventually persuading Blackwood to flail at one. Buttler completed the catch, making good ground in the process, to provide a much-needed pick-me-up.